Sept. 28, 2018 - At the Produits forestiers Petit-Paris (PFPP) sawmill in Saint-Ludger-de-Milot, Que., the logs sail by at full speed on the new PHL large log saw line. “We have moved on to a new generation of saw lines,” says sawmill manager Martin Sirois. “Not so long ago, it was the workers who rotated the logs.” 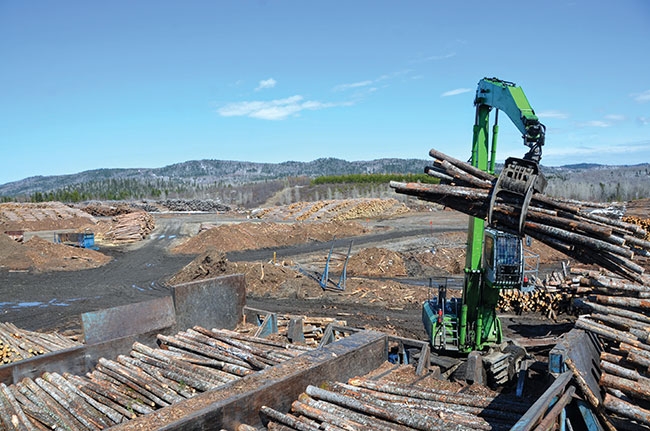 The sawmill keeps on average 130

“Our goal was not to increase the volume of processed logs since we are limited by supply,” explains Alain Paradis, the general manager of the Coopérative forestière Petit-Paris (CFPP), the main shareholder of PFPP. “We wanted to produce more board feet and it has been a tremendous success.”

In addition to increasing production efficiency, the move to curve sawing has also improved lumber quality, and the mill produces eight per cent more higher-grade wood. “The wood is longer and we have better value for 16-foot lumber,” Sirois says.

These results are impressive, but they are the fruit of major efforts put forth by the CFPP. “We are talking about investments of $20 million to buy full ownership and to modernize the mill,” Paradis says. “It was a very audacious project, but essential to the survival of the mill, since the new Quebec forest management system has caused log costs to go up. We needed to be more efficient. Without these investments we would have had to sell the mill since it hadn’t turned a profit in several years.”

Buying out Resolute
The idea to modernize the PFPP’s mill to make it profitable once again had been on the table for a few years, but the co-operative first had to get approval from Resolute Forest Products, which has held 50 per cent of the sawmill’s shares since 1987.

“We worked with Resolute to put together a well-structured project and combined our efforts with their Mistassini sawmill,” Paradis says. “Resolute was interested, but after a while they let us know that this project wasn’t a priority.”

But the modernization of the mill had become necessary, so the co-operative proposed to buy the shares of the forestry giant. Resolute was the first to make a buyout offer, leaving the co-op four months to match the offer.

“If we wanted to convince people to lend us money, we had to show them that our mill modernization project was well-founded,” Paradis explains. “It was an enormous challenge for the co-op, since it involved massive amounts of money, which had to be secured in four months.”

After consulting its 135 members, the response was unanimous — they needed to take the mill’s destiny into their own hands and buy out Resolute’s shares. To do that, the CFPP found new partners: the Fonds de valorisation bois (32 per cent), Fondaction (8 per cent) and Poutrelles internationales (8 per cent), which together totalled 48 per cent of Produits forestiers Petit-Paris (PFPP). Backed by these partnerships, the shareholders were able to convince Investissement Québec to get on board in order to carry out two major modernization projects: converting the thermal power plant by installing a biomass boiler and modernizing the sawing line.

Modernizing to survive
As soon as the buyout of the mill became official in February 2016, the partners began the first modernization phase by converting the thermal power plant, previously oil-fuelled, to biomass. The sawmill opted for a boiler from Compte-Fournier, which allows them to burn 50 per cent of the bark produced on-site. The conversion reduces the mill’s greenhouse gas emissions by 3,363 tonnes annually. “This investment also allowed us to improve our drying capacity by 17 per cent since our old boiler was smaller and at times struggled in the winter. We also reduced our production costs by 35 per cent,” Sirois says.

“It’s thanks to $1.6 million in assistance from the Fonds Biomasse Énergie [Quebec’s biomass fund] and available tax credits that we were able to carry out this project, because without this help the payback would have taken too long,” Paradis says.

The boiler became operational on May 1 last year. It goes through an average of three tonnes of bark per hour. “After experiencing all four seasons, we were able to make several adjustments to improve operational efficiency,” says Guillaume Gobeil, who operates the boiler and dryer.

One of the issues they tackled was related to clumps of raw material forming during cold weather. Another challenge was finding the right chemicals to treat the system. “Magnus Products has a product that treats our entire steam system and protects pipes, without any dangerous handling,” Gobeil says.

The sawmill keeps on average 130

000 m3 in inventory. After the investment

Even before the biomass boiler project was finished, PFPP was already at work on the modernization of the large 16-foot saw line. “We were challenged to find an optimized line, with all the new technology, that fit in the space we had,” Paradis says. In addition to budgetary constraints, the mill is located at the end of Hydro-Québec’s distribution network so the project managers had limited electrical supply.

“We really knocked it out of the park this time. We were able to fit a primary sawing line and an optimized secondary line in a limited space,” Paradis says. PHL and Comact, both subsidiaries of BID Group, manufactured the line.

PFPP was forced to make a few concessions. For instance, it was not possible to fit a twin saw on the primary line. “We decided to let it go, since it didn’t give us the desired added value,” Sirois explains. As well the mill had to move the debarker, remove one of the three bins and double the scanners on the primary and secondary lines to make space for scanning. “Everything was calculated down to the square inch,” Sirois says.

In October 2017 the nearly $8-million project was put into operation.

Just a few months later, the sawmill invested in a planer optimizer from VAB Solutions. “We opted for a solution with tracheid scanning to pick up knots and grain deviations, and we are conducting an R&D project with VAB to develop a way to detect blue stain,” Sirois says. The $640,000-project will ultimately help reduce the mill’s downgrading of wood due to colour.

Just a bit further down the planer line there is the TMG-16 system — a transverse machine stress rating (MSR) grader developed by the Centre de recherche industrielle du Québec (CRIQ) for measuring stiffness in lumber to determine its MSR. It is a useful grader for the PFPP, which produces nearly 30 per cent MSR lumber.

“The wood comes from far away, but it is beautiful. That’s the advantage of northern wood,” says supply manager Dominic Bouchard.

The wood line
In the log yard, the Petit-Paris sawmill has on average 130,000 cubic metres of inventory, 70 per cent black spruce and 30 per cent fir. The fir all goes through the 16-foot PHL line. The spruce is sorted in the woods with large logs cut into 16-foot lengths and sent through the PHL line, and the small logs into 21-foot lengths, which are then cut in half before passing through the small HewSaw log line.

The wood is sent to two sorters, a 42-bin Carbotech sorter for 16-foot wood, and a 25-bin Gemofor sorter for 10-foot wood. The majority of the wood is dried in one of four kilns, two Cathilds and two MECs. The remaining wood is sold green or dried in other facilities.

PFPP manufactures a variety of products, ranging from 2×3 of four feet to 2×8 of 16 feet and all lengths between. Poutrelles Internationales, which is one of the mill’s shareholders, handles the mill’s marketing.

Paradis says the investments allow PFPP to take advantage of the recent spike in lumber prices. To continue increasing profitability, the mill recently installed data acquisition and decision-making tools from PMP Solutions at the planer. It’s the first step among others in the age of smart mills, Paradis says.

All these improvements are well timed for the celebration of the 50th anniversary of the co-operative this year. But despite the improvements made over the past two years, the team does not intend to sit back and relax. “It’s a success story and we want to continue to do better,” Paradis says.