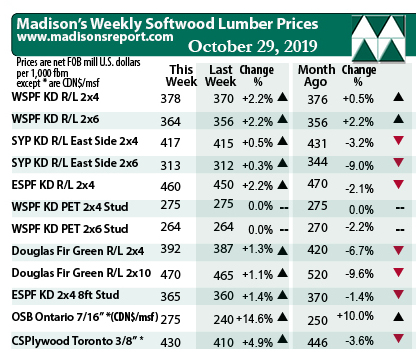 This week started with big news as Canfor announced a bid to go private, and Conifex sold its Fort St James timber rights to Hampton, which plans to build a new sawmill within 36 months.

Last week, construction framing dimension softwood lumber prices rose slightly, while oriented strand board (OSB) and plywood prices absolutely soared. There are fewer panel producers than dimension lumber manufacturers — on a relative basis, and they are more disciplined with their production volumes during times of soft demand. Such a sheer change in prices, whether up or down, suggests a new level is achieved in the negotiations between panel buyers and sellers. As North America enters the annual storm season and California faces more terrible wildfires, it is likely that demand for panel in reconstruction projects will be strong. This could mean that these new price levels for OSB and plywood could remain into the U.S. home building season 2020. Of course only time will tell.

Madison’s Lumber Reporter reminds that at this time last year those record-high wood prices were in a terrifying freefall. The graph below illustrates the change in direction; with prices now heading upward after the lows of summer 2019.

Western SPF Oriented Strand Board prices had already started to move up before last week’s mill curtailment announcements, and when the dust settled those prices had vaulted anywhere from +$71 to +$107. It was anyone’s guess whether this development was sustainable, but for this week at least sales of OSB went cuckoo and western panel mills were booked production into the week of November 18th. For their part, WSPF plywood mills remained firm on pricing, with mid-November order files.

The below table is a comparison of recent highs, in June 2018, and current October 2019 benchmark dimension softwood lumber 2×4 prices compared to historical highs of 2004/05 and compared to recent lows of Sept 2015: