Features Harvesting Logging Profiles
Passing the torch: Logger invests in new tech for the next generation

Aug. 10, 2018 - In front of us is a tracked Neuson Forest 103HVT single-grip harvester, operated by 22-year-old Gabriel Leblond. He is felling young trees one after another at a private woodlot in Saint-Damien-de-Buckland, in the foothills of Bellechasse, Que. With its new AFM 35 harvester head, the machine can work impressively fast. 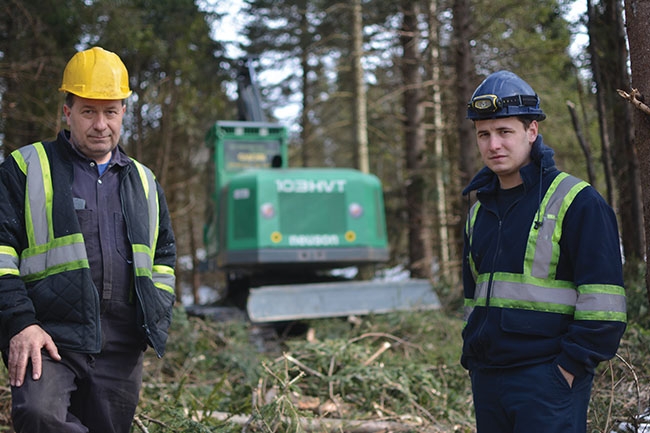 However, it’s not the machinery that makes Christian Leblond’s eyes sparkle. As the owner of Les Entreprises Forestières Gabchri, it’s his son who makes him proud. “Without Gabriel, I would never have been equipped like that. His generation knows computers and electronics,” admits the 53-year-old logger.

Ever since his son joined him in the family business, some three years ago, Christian has literally rediscovered his trade, one that he has practised since 1983. “I started logging with a horse and chainsaw. After five years, I finally bought a Massey-Harris 22 tractor and then a Valtra in 2006,” he says, well aware of the strides he’s made.

It was Gabriel who shopped around for the Neuson harvester three years ago, along with the AFM harvester head a year and a half ago. He became very familiar with this type of equipment when he took his machine operator course. “I learned to work with a Neuson, but it was bigger,” he says.

For the Leblonds, it was out of the question to get a monster-size harvester. “It reassures people to see us arrive with a small machine on their property,” Christian says. The 103 HVT is compact and manoeuvrable in steep slopes, and has all the qualities for excellent pre-commercial thinning, the bread and butter of Entreprises Forestières Gabchri. “Clearcutting is not really our thing,” he adds.

It was necessary to purchase a new harvester head with rollers shortly after the Neuson went into service. The performance of the former harvester head with cutting blades was disappointing. “With the AFM 35 stroke harvester head, you can efficiently fell 40-foot trees as well as handle small stems. It’s the best of both worlds,” Gabriel says. CFI got a first-hand look at operations when Gabriel cut hardwood stems into 14-foot logs, but also softwood stems into 9-foot logs.

Les Équipements Marquis in Sherbrooke, Que., supplied the father and son with the equipment. The duo’s total capital investment was $460,000, financed over five years. A steep investment, but necessary, Gabriel says. “I want my tools to be impeccable. To be more productive, we didn’t have a choice.” By using the equipment, the company was able to produce some 35,000 cubic metres last year, a record.

To haul the wood, Christian currently uses a Timberjack 1010 B forwarder. Even if it “serves its purpose” with a maximum loading capacity of 10 tonnes, it is starting to show its age — the machine is over 20 years old. “We have $18,000 to invest to bring it up to snuff, but it’s a gas-guzzler,” Christian says. He admits that, at times, he struggles to keep up with his offspring’s work pace.

That’s why the father-son team is thinking of replacing it with a John Deere 110G forwarder.

Business partners
Becoming a logging contractor was not in Gabriel Leblond’s plans when he was younger. Somewhat interested in the dairy industry, he considered studying in agriculture, up until a fateful summer day when he was 16. “I saw a harvester at work in our back yard, in Saint-Malachie. I was hooked,” he recalls.

At 18, Gabriel took his machine operator course at the Centre de Formation et d’Extension en Foresterie de l’Est-du-Québec, a vocational education centre in Causapscal, in the Lower St. Lawrence region. Instead of the six months normally required to complete the training, it took him four. Among the 18 students in his group, Gabriel clearly stood out. “I really like what I was doing, and one of my teachers came to see me to offer me a job at Irving, in the Maritimes!” he said.

Nonetheless, he decided to return to the area where he grew up and to which he was deeply attached. He initially worked for Entreprises Forestières les Sapins Verts, in Notre-Dame-du-Rosaire. He logged there for a season and a half, “the time to gain some experience.”

His father Christian finally asked him to become his partner in 2015. His offer? Fifty per cent of the family business shares, nothing less! At 19 years of age, Gabriel could not refuse. Even the company name would make him happy. “I always knew that Gabriel would join me. That’s why I called the company the way I did back then, when he was still just a kid,” he says.

For the Leblonds, logging is a family affair. “My father, who still comes to see us at work sites despite his 80 years and counting, was also a lumberjack when he was younger,” Christian says, who has over 30 years under his own belt. According to him, very early on Gabriel showed he had the necessary “guts” to succeed in this fiercely competitive field. “He is very mature for his age,” he says.

Business is steady for Les Entreprises Forestières Gabchri. In fact, since their association with the Groupement Forestier de Bellechasse-Lévis last year, they even had to turn down some contracts. “They pay well, are generous to us, but still respect our desire to remain independent. It’s really a win-win partnership,” Gabriel says.

At 53 years old, Christian is only beginning to think about his retirement, which he figures will be “somewhere around the age of 60.” Yet, there is no shortage of projects. “I bought a small piece of land close to Sainte-Euphémie-sur-Rivière-du-Sud, on which I would like to build a sugar shack,” he mentioned in passing.

Regardless of what he decides to do, his mind will be at ease since he knows his son is keeping a close eye on the business.