It’s a sure thing – the wood pellet production industry in Northern BC is certain to grow. So says John Swaan, executive director of the Wood Pellet Association of Canada (WPAC) and chairman of the Third International BioEnergy Conference and Exhibition slated for Prince George, BC next spring. 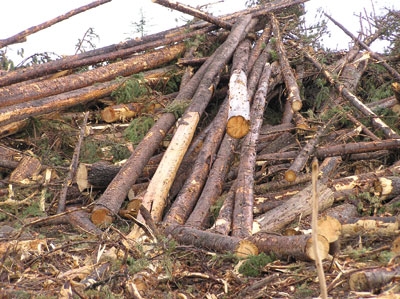 It’s an industry forecast driven largely by a mountain pine beetle epidemic that has infested millions of hectares of forest. If producers are allowed to seize the opportunity, and turn beetle-kill waste into pellets, Swaan says Northern BC will become the world’s largest wood pellet fibre basket.

As a pioneer in Canadian wood pellet production (he founded Pellet Flame in the mid-1980s), Swaan was a trailblazer before the mountain pine beetle infestation was first reported. He’s seen the sector grow from infancy to present day. “We live in the breadbasket when it comes to wood pellets,” he says, noting a study that identifies at least 17 million ha of beetle-affected territory, containing prime fibre for wood pellet manufacturing.

Until now, how-ever, most of the raw material for wood pel­lets in Canada has come from sawmill floors and other waste from the milling pro­cess. In BC, sawmills continue to be the main fibre source, turning a waste product into an environmentally superior fuel.

“One issue we are dealing with is how to access the wood waste that’s being left in the forest,” says Swaan. “Logging contractors pay fees according to the weight they bring into the mill, so they’re not going to be bringing in material that’s not suitable for two-by-four production.”

Swaan says the WPAC is focused on lobbying governments at federal and provincial levels, as well as major forest product companies, to improve his sector’s access to the forest and valuable fibre.

In North America, retrofitting remains a major challenge to pellet-fired district heating projects, says Swaan. The good news is energy suppliers such as BC Hydro are now at the table for ongoing discussions with government legislators as well as pellet producers.

Making wood pellets an economically viable energy alternative is a constant goal, and there have been success stories. Some members of BC’s greenhouse industry, for instance, are using wood pellets to heat their operations in the Fraser Valley.

Ongoing scientific research is also key to wood pellets’ viability as a fuel alternative. So Swaan spends much of his time working at the University of British Columbia in Vancouver with a team dedicated to advancing wood pellet production technology.

“We have a laboratory and reactor where we can simulate situations – for instance, testing what kinds of gases are given off by the pellets and the heat needed to produce those gases,” an issue for safe storage and transport. According to Swaan, “We already know the art of making wood pellets, now we are learning the science.”

Environmental advantages of using wood pellets as an alternative fuel are already certain fact, says Swaan. “People just don’t understand fully yet the value of the fuel that we have above ground,” he says of the current mindset, noting that instead of looking at wood fibre as cubic metres, he sees kilowatts.

The Third International Bio-Energy Conference and Exhibition is also dedicated to raising the profile of the bioenergy industry, and the many innovative companies and researchers involved in it. The conference, to be held in Prince George June 3 to 5, 2008, is seeking abstract submissions from presenters, as well as exhibitors. For more on the conference go to www.bioenergyconference.org. To learn more about the Wood Pellet Association of Canada, visit www.pellet.org.