Two words wrap up the Third International Forest Engineering Conference (FEC), held in stunning Mont Tremblant, QC, in early October – Operators and hardwoods. At least they sum up the part of the conference I saw, since the busy event featured concurrent sessions, and I chose to focus on the human side of the equation as much as possible. 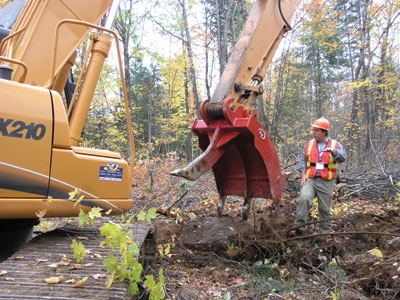 Previous FEC’s were held in Scotland and Sweden, and this third edition was hosted by FERIC of FPInnovations fame in this upper Laurentian Mountains resort town two hours north of Montreal.

Just to confuse the international guests, the event kicked off with speeches from Canadian dignitaries. Several hundred international delegates heard Quebec Ministry of Natural Resources and Wildlife assistant deputy minister Paule Têtu say that all was well in the kingdom, only to be contradicted bluntly by Quebec Forest Industry Council’s ever-colourful executive director Guy Chevrette, who said the sky was falling. With our domestic dirty laundry hanging in full view, we got to move on to matters more technical, albeit not as entertaining.

Talking Production
The FEC draws largely a hands-on crowd, so much of the talk was on such practical matters as productivity and costs per metre. Longtime head of Sweden’s forest engineering group SkogForsk, Jan Fryk, set the tone by showing attendees graphs of good future growth in global forest products demand, but also showing the kinds of annual productivity gains the Swedish industry has seen in the past, and will continue to need in the future to survive. These have been in the 2 to 4% range, and were largely gained in the past via mechanization and machinery improvements. There are still gains to be made on the latter, he said, in areas of increased automation and efficiency.

Fuel efficiency is another area where large gains have been made in Sweden. Total consumption from cutting to mill gate has dropped from 5.4 litres/m3 to 3.7 in the past 20 years, Fryk said. It is a big reduction, he admitted, but stressed that more gains must be found to compensate for sky-high fuel pricing. Everything from regen braking in forwarders to advanced operator training is being looked at, and the potential is high. In Canada, of course, we have even greater potential, as much of the low-hanging fruit is still ripe on the tree. 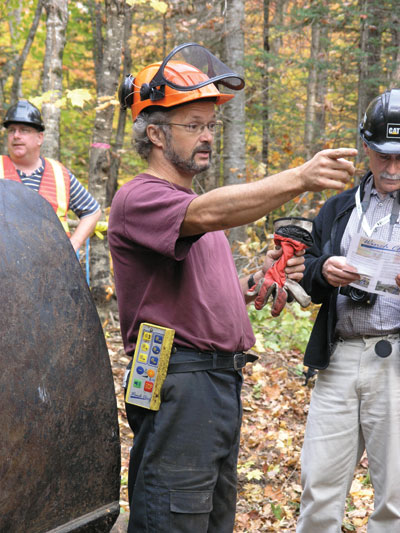 Machine efficiency aside, the human factor will play an increasingly bigger role in driving success in northern regions with high wood costs, like Finland, Sweden, and yes, many parts of Canada. Our industry must look at it all, from recruiting and advanced training to equipment design and automation. It’s a rich field with vast potential, but as Richard Brinker of Auburn University noted in one of four keynote addresses, the first step is putting someone in the operator seat. His review of U.S. occupational outlook studies in which forestry careers were either unmentioned or finished near the bottom does not bode well for our ability to attract the best and the brightest (or even the upright).

Assuming we manage to fill those seats, researchers in the human element session looked at ways to get the most from our operators without burning them out or breaking their bodies. Thomas Purfurst with the University of Dresden in Germany has done extensive work on the human influence on forest machine productivity, looking at over three years of data on 32 operators and some six million trees. He noted that 70% of harvester productivity for example can be explained by stem volume, which is neither surprising nor something we can influence. A good chunk of the rest goes back to variation in operator performance, variations that he found can be massive even among experienced operators. One key phenomenon he unearthed is a tendency for operators within a team to eventually settle at or near the same production level over time. Typically, good operators settle down as much or more as poor operators move up, so that the net impact of this effect is lost production. Also crucial, he added, is the effect of training of experienced operators, as he saw noticeable improvements after just two hours of training.

To help minimize the human impact and reduce operator stress, the folks at SkogForsk are studying opportunities for enhanced machine automation. Researcher Bjorn Lofgner shared work on automated boom movement, automated harvester head turning, and automated sorting. Using a simulator, he has quantified potential gains from such investments, and they are substantial. They can also shorten operator learning curves and allow more of the critical “micro-pauses” so important to reducing long-term physical stress among operators.  Of course, a good first step among many Canadian operators would be to maximize the use of the automated functions that already exist, and this study shows the importance of doing so.

Finally, Edgar Kastenholz of the European contractor association ENFE detailed work they are doing to take existing ergonomic forest machine operator information, such as the handy European Union guide Ergo Wood, and re-package it for contractors and operators. “The information is there, and it’s important to long-term operator health and to our ability to attract new operators,” he stressed. “But it’s not getting to the people that need to know.” Details of their knowledge transfer approach, as well as on Ergo Wood, can be found at www.enfe.net, or a copy of the Ergo Wood booklet at www.enfe.net/archiv/pberichte/hp_final_engl.pdf.

What’s a Buncher?
For a largely European crowd used to softwoods and single-grip harvesters, the field trip to a hilly hardwood stand an hour north of Mont Tremblant was an eye opener indeed. So too was the Caribou (Quebec-style moonshine) and maple flavoured beer served after the tour, but that’s a story for another day. 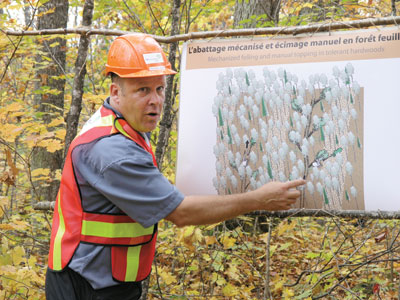 The mini demo involved 10 stations covering everything from light-weight skidder cables and site-prep tools to computer optimized bucking training, hi-tech information management tools, log storage under snow, CTI trucking, and swing grapple skidding with the Morgan skidder. Proceedings from FEC and details on many of the hands-on tips are available from FERIC (www.feric.ca), but the quote of the week goes to a couple of Swedish researchers during a tour of a yellow birch regen site. The prescription was for larger openings to allow enough light to favour Quebec’s provincial tree over maple, along with site prep using a combined, excavator-mounted mounder­-scarifier grapple from Les Ateliers RF. It was a typical Laurentian region hardwood stand, complete with fall foliage, leaves underfoot, and some dead and rotting biomass. It looked and smelled to me like Canadian autumn, and hunting season. Pulling me aside, my Swedish forest engineers asked, “What happened here? Why aren’t they planting spruce? Was it some sort of mistake?” Dumbfounded, I replied: “No mistake – Just Mother Nature.” 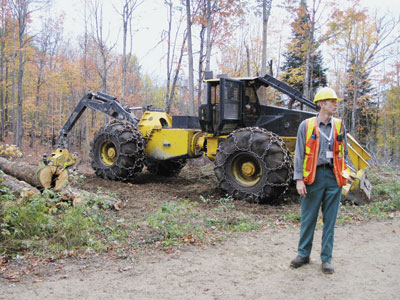 The only downside to the event was the poor showing by Canadian forest engineers and industry folk. I hadn’t realized that we know everything already, so I suppose it was just sporting of us to let the rest of the world catch up. In that light, I hope you plan to join me, along with FERIC’s Jean-François Gingras, technical director for the Mont Tremblant conference, for the 4th FEC, to be held in Vitoria City, Brazil in 2011.