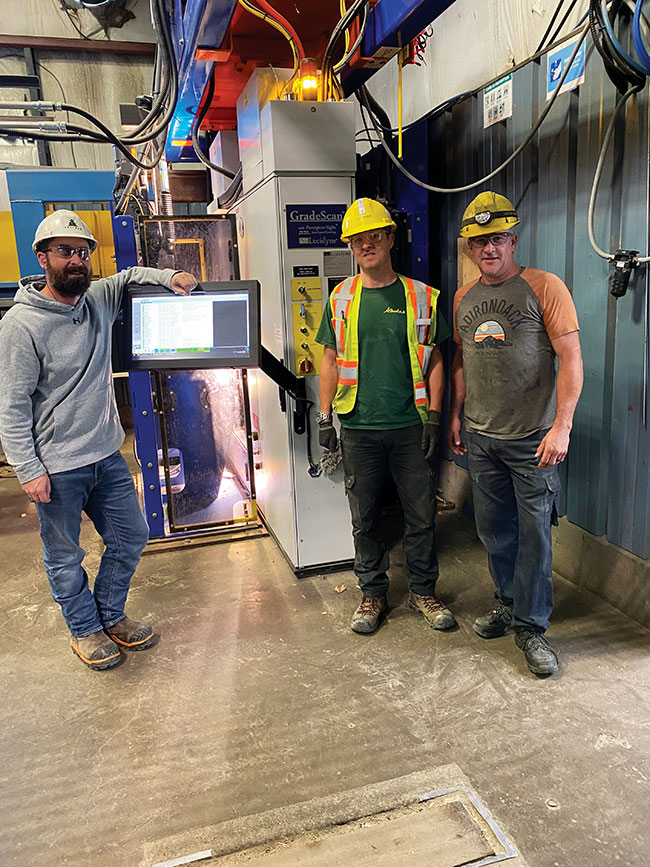 In 1832, Gorham Freeman built a sawmill in Greenfield, N.S., and the Freeman family has been operating sawmills in the area ever since. As one of the oldest family-run businesses in Nova Scotia, they know what it takes to weather the ups and downs of the industry. In fact, in the 1900’s, the family’s sawmills were destroyed multiple times, either due to fire or storms. In 1990, the sawmill burned to the ground for the second time, and rebuilding efforts sparked a period of rapid expansion that is ongoing today.

The company, now operating under the name Harry Freeman & Son and owned by brothers Charlie and Richard Freeman, employs 150 people full-time, working a shift-and-a-half per week. The mill shipped just under 110 mmbf last year, and is on its way to producing 115 mmbf this year, Richard says.

Most of that lumber is SPF, but they also produce approximately 20 mmbf of eastern white pine. Products range in size from 1×2 to 2×12, including dimensional lumber from six to 16 feet in length; Spruce decking at custom lengths; one-inch SPF boards in various widths for sheathing, strapping and fence construction; and 5/4-inch and one-inch eastern white pine products from three to 12 inches wide.

These products are delivered to customers down the eastern seaboard to Florida, to the U.S. Midwest, and eastern Ontario. Some products are also exported to Pakistan, explains Luke Freeman, dry-end superintendent at Harry Freeman & Son.

Modern facilities
Harry Freeman & Son includes not just a sawmill, but also a stud mill, planer mill, white pine remanufacturing facility, and high-speed moulding plant. The facilities have seen several upgrades over the years to become among the most modern in eastern Canada.

The sawmill is “set up like a duplex,” Richard says. Logs from the log yard go through one of three Nicholson debarkers or an old Morbark debarker. Smaller logs go through a Comact small log line with a Comact trimmer optimizer and Comact optimized board edger. Lumber is then sorted into a 20-bin sorter.

The sawmill, located next door to the stud mill, has a Comact OLI and a Cardinal carriage for primary breakdown. A Comact CPG is used for secondary breakdown. Like the stud mill, the sawmill is highly automated, with an Autolog trimmer optimizer and PHL board edger that grades the lumber and detects any defects, Richard says. The sawn lumber is then sorted in a 45-bin sorter.

The lumber is then dried in biomass-powered steam kilns, after which it goes to the planer mill, through a Gilbert planer and an Autolog linear optimizer, to a 20-bin sorter.

Optimizing operations
Over at the white pine remanufacturing plant, a new optimization project was completed in July. The plant, which has a Gilbert S-series planer moulder and a Leadermac moulder, now features a new Full GradeScan with Perceptive Sight from Lucidyne.

“We thought there was a good opportunity with white pine to really focus on better grade recovery and better optimization,” Richard explains when asked about the motivation for installing this new equipment. Previously, grading in the remanufacturing plant was a bottleneck, he adds.

They decided to go with Lucidyne for two primary reasons. First, the company needed a linear machine, as a transverse one would not work with the layout in the plant.

Secondly, Lucidyne has “a great deal of experience dealing with white pine and have excellent customer references,” he says. “The people that were using their system with white pine have been very pleased with how they work, and, so far, we’ve been impressed not only with their equipment but with the level of service they’ve been providing us.”

To install and commission the equipment, the plant only had to be shut down for five days while the new equipment was installed, Luke says. Lucidyne installed the equipment over a weekend, which was ideal as the mill does not run on weekends.

It was “a bit of an adventure” making a new optimization system work with the plant’s existing controls, Richard admits. But, thanks to support from Lucidyne and their own employees, the installation was completed pretty smoothly.

“We found effective workarounds that enabled us to continue with the commissioning of the line, and to keep moving forward and refine the implementation of the system,” he explains.

The company expects a strong return on investment, since the equipment reduces trim loss and improves the accuracy of grading, resulting in higher productivity.

Investing in the future
And there are more optimization projects in the works at Harry Freeman & Son. The company plans to add additional bins to their lumber sorter at the sawmill, replace their debarkers with two new ones and a used one, and add four log decks. They also plan to replace the sawmill’s trimmer and edger optimizer system with two new vision systems from Comact and install Autolog’s newest species detection system to replace their current one in the stud mill.

The filing room is “trying to automate,” he adds. “Maintaining good quality saws is one of the most important parts of lumber production, of course, and we have to make it easier for the guys to do better jobs, so we’ve made quite an investment there.”

These investments will help the company continue to be successful in the face of multiple challenges – most importantly, the closure of Northern Pulp in Nova Scotia in January 2020.

“It’s had a huge impact on us,” Richard says. “Here in Nova Scotia, we’ve got the highest log costs in Canada. The province, in effect, closed our largest and most important customer.”

According to data published by the government of Nova Scotia, Northern Pulp’s closure resulted in a 25 per cent reduction in the provincial harvest in 2020 compared to 2019, which is about an 800,000 cubic metre reduction – the lowest harvest levels since 1962, Richard says.

Record-high lumber prices since summer 2020 have helped offset the effects of the pulp mill’s closure. But, this means “the full impact of it really hasn’t been felt yet.”

On top of the impact of Northern Pulp’s closure, Richard believes current policies are hampering the forest industry.

“We’ve had a very poor policy environment from the provincial government and even from the federal government. It’s not very complicated – we need access to renewable resources and we need markets for residuals,” he says.

Telling our story
Despite this, he believes the sawmill industry is in a good spot, given the environmental benefits of wood products.

“We probably have the best possible building product in an age when people are concerned about the renewable use of scarce resources and carbon sequestration,” he says. “We’ve got wood, which is just a wonderful product – grown with solar energy, it’s renewable, captures carbon, and it has low embodied energy.”

For Richard, the bioeconomy presents a huge opportunity in the forestry sector. Now, it’s just a matter of getting policies in place to be able to take advantage of it.

“Hopefully, we’re going to have that policy environment where rural Nova Scotia can take advantage of these opportunities that are arising as they do in other places, like Scandinavia,” he says. “They grow nine times as much wood per acre in Scandinavia than we do in Nova Scotia, and it’s an abomination.”

The industry also needs to do a better job raising awareness about the environmental benefits of forestry, he says.

“We’ve allowed people who are opposed to the responsible development of natural resources, including renewable resources like forestry, to tell our story for far too long,” he says. “We’ve got a great story now, and we need to do a better job telling it.”

With opportunities like the bioeconomy and engineered wood products, Richard is optimistic about the forest industry. And he believes Harry Freeman & Son is well-positioned to benefit from these possibilities.