The timing of the inaugural Timber Processing & Energy Expo (TP&EE) held in October in Portland, Ore., seemed to be prescient. The new show debuted just as it appeared the wood products industry was turning the page on the economic downturn. 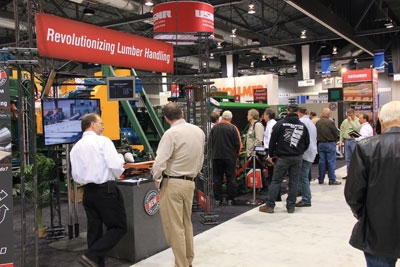 With home building beginning again in the U.S., sawmills and wood products facilities that have weathered the crisis are gearing up for new demand and are hopeful for improvements in 2013 and a sustained rebound in 2014.

U.S. production and permitting of new homes rose sharply in September to their highest levels in more than four years, according to the latest numbers from HUD and the U.S. Census Bureau.

September showed a 15% gain, bringing the pace of new housing construction to a seasonally adjusted annual rate of 872,000 units, while an 11.6% gain brought the pace of permit issuance to 894,000 units. These were the strongest numbers seen in both categories since July of 2008.

That optimism was reflected by the strong exhibitor turnout at the show, which was hosted by Timber Processing, Panel World and Wood Bioenergy magazines and operated by Hatton-Brown Expositions, an affiliate of U.S.-based forestry publishers Hatton-Brown Publishers Inc.

More than 2,000 people attended the event, including personnel from 150 exhibitors, from 30 states, five provinces and New Zealand. The mood while upbeat, was focused, as attendees looked for the latest technology and automation to help them cut costs, work more efficiently and anything else to give them a leg up in this highly competitive and increasingly global marketplace.

The 40,000-square-foot exhibition space at the Portland Exposition Center was full, showcasing machinery, supplies and services geared toward the primary lumber, engineered wood products, panel and wood energy sectors of the industry.

The sawmill scanning and optimization sessions included a presentation by USNR discussing some of the new tools that are capable of affecting the ultimate grade of wood in order to meet demands for increased recovery, faster throughput, lower cost and higher grade extraction.

Joey Nelson, owner of Washington-based JoeScan, said he expects the trend of smaller upgrades in scanning technology to continue. He also commented that he expects to see more mills installing completely new scanning and optimization systems to replace obsolete equipment that is becoming a challenge to support.

“Our industry is probably going to be growing and spending more as the economy improves,” he said. “And they’re thinking about where they’re going to spend that money to really help them prepare for a better business climate. We’re already starting to see mills looking to expand and to add equipment to increase production. Though it really has more to do with finding ways to be more efficient than it is about increasing production.”

John Robinson of Drying Technology Inc. presented an “inside-the-dryer” moisture sensor his company has patented that he said can ensure wood pellet producers ship product that won’t fail to meet moisture content specifications. “The Delta T MC sensing and control technology is based on a first-principles-derived mathematical model,” Robinson said, adding that it can eliminate over and under drying of wood biomass.

Consultant Bill Carlson told the audience that although biomass combined heat and power should be part of a long-term forest products company strategy, it is not for everyone. “[CHP] is a means to an end, not an end itself,” he said.

“Wanting your own plant is not a sufficient reason.”