Feb. 13, 2017 - Several years ago, Foothills Forest Products had a difficult time finding a home for the shavings being produced by its planer mill operations at its sawmill in Grand Cache, Alta. 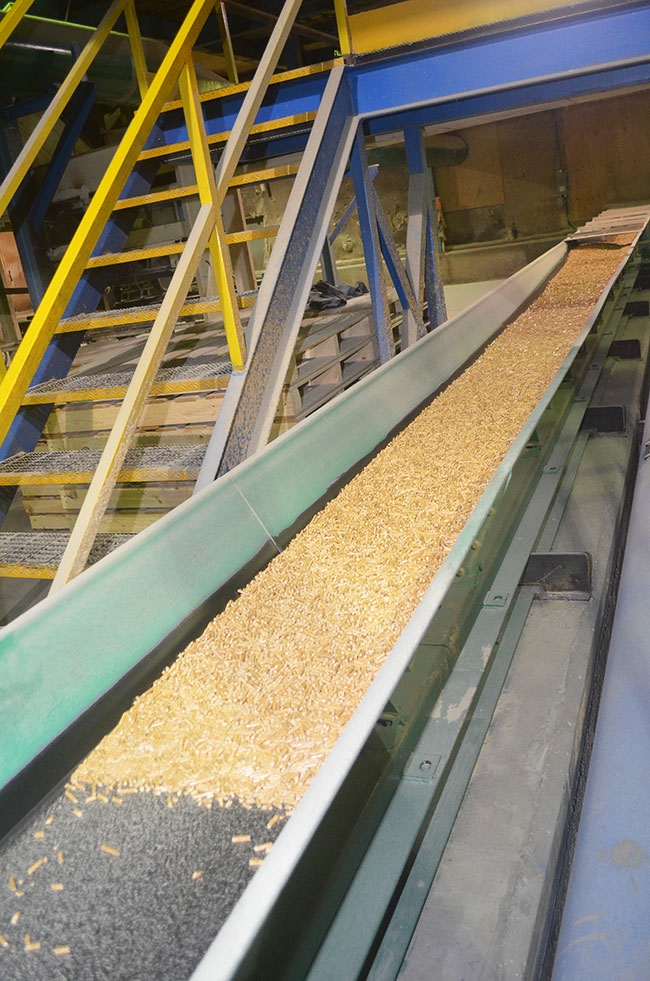 Foothills Forest Products recently re-established its rail service so the mill can deliver its products across the U.S. and into the port of Vancouver to customers in Asia. Several yeas ago

So instead of trying to find a buyer for them, the sawmill owners decided to go into the wood pellet business and added a pellet operation to its existing mill.

The wood pellets that the plant produces service the residential heating market in northern Alberta as well as the oil and gas sector. The split is about fifty-fifty between pellets heating homes in the area and heading to oil patch for use as an absorbent.

The wood products company, owned by C&C Resources Inc., has an annual pellet production of 15,000 tonnes – which is relatively small, but there’s room for growth.

“There’s going to be more demand for pellets,” says Mark Stevens, general manager for Foothills Forest Products. “Presently our pellet operations is quite small, but it is not designed to take all of the residuals from the mill.”

Some of the residuals from the sawmill and planer mill are also sent to a Volcano boiler that provides heat for the sawmill’s two shifts and for the dry kiln.

The sawmill produces 110 million fbm of dimensional lumber annually, ranging in size from six-foot-long to 16-foot-long 2x3s to 2x10s. The boards are predominantly made from lodgepole pine, but the mill also processes spruce and balsam in its operations.

The majority of the final products are typical construction grades with some J-grades.

Minimal moisture
One advantage of using strictly planer mill shavings to produce pellets is that the production process does not require a drying system, which cuts down on costs.

“With the shavings coming from the planer they’re close enough to being dry that the pelletizing process leaves a moisture content of less than seven per cent,” explains Stevens. “We measure the moisture every morning and we don’t bag them unless we’re on target with our moisture.”

The shavings are collected from the planer mill and blown into a dry silo then are sent to a hammermill to be processed before being fed into one of the mill’s two pelletizers. The pellets then travel along a conveyor that is split into two paths. One path sends the wood pellets to a silo for bulk storage and another that sends the pellets over to the bag line where the pellets are bagged and sealed.

Caribou sensitivity
One challenge the company’s sawmill is experiencing is finding the 440,000 cubic metres of fibre it requires to operate. This challenge is largely due to the Government of Alberta’s Caribou Range Plans, which is a very sensitive issue in the area.

Stevens says the provincial government does have an appreciation for the economic impact of the mill for the local population.

“We are working together with the Alberta government to build a solution that satisfies both the needs of the caribou while ensuring a stable future for Foothills, one of Grande Cache’s largest and most stable employers,” he says.

“We appreciate our logging contractors,” Stevens says. “We’re not in a market where there’s a lot of interchange of work from one mill to another, so we’re all in this together. Our contractors have done a great job, particularly this summer and fall when wet weather caused difficulty for the log haul. They worked day and night, everyday of the week to keep the log deliveries coming to the mill.”

Foothills Forest Products recently re-established its rail service so the mill can deliver its products across the U.S. and into the port of Vancouver to customers in Asia.

Co-firing opportunities
Although the market for wood pellets for the oil and gas sector has been on a decline due to lower oil prices, the potential use of wood pellets in another part of the province’s energy portfolio has pellet producers in the province excited about the possibility of a new major domestic market.

There have been talks about the possibility of using biomass, including wood pellets, for co-firing in coal plants to help the province reach its future emissions targets without stranding expensive infrastructure assets.

One challenge for Foothills Forest Products when it comes to co-firing is its remote location. The sawmill and pellet plant is nestled in the Alberta Foothills, about a two-hour drive north of Jasper and a four-and-a-half hour drive west of Edmonton.

“Distance is a challenge for us since we’re far from the major urban centres,” Stevens says. “Co-firing opportunities are not as close as would be ideal, but we will fall within the fibre basket for some new or converted facilities and see a demand for our biomass.”

By finding a productive use for its planer mill shavings through the generation of pellets, Foothills Forest Products is positioning itself well for a potential biomass boom related to co-firing while keeping its operations diverse.

Planer optimization
One of the most recent upgrades done to the planer mill was the installation of a VAB linear grade optimizer in the fall of 2013, along with upgrades to some of the lumber handling equipment.

“The VAB certainly improved our ability to capture value from each board,” says Stevens. “It was a good step forward.”

With the optimizer’s ability to identify geometric and visual defects, the upgrade allows the mill to more accurately and effectively grade boards, producing a more consistent product for its customers. “It’s all about value recovery and getting more value out of every log,” Stevens says. “It’s not just about faster and bigger.”

The project was managed by Wolftek Industries out of Prince George, B.C.

Sawmill improvements
Wolftek was also involved as the lead contractor in a sawmill modernization project in 2014 that saw the installation of two Linden log ladders and two Nicholson debarkers as part of a new log infeed system for the mill.

Another long-term investment is presently underway with the installation of an electrostatic precipitator (ESP) by Del-Tech Manufacturing out of Prince George, B.C.

“We can’t stand still,” says Stevens. “While the ESP is necessitated to meet changing provincial emission standards, it is just one other example of our owners’ commitment to the future of this mill.”

Another recent project has seen the re-establishment of rail service to the mill. “We are now delivering our products throughout the U.S. and also through the port of Vancouver to customers in China.”

With this continual investment, combined with its focus on safety, the environment and product quality, the future looks bright for Foothills Forest Products.

“Our community has gone through some difficult times with the ups and downs of other industries, but at least our mill has provided steady employment, even weathering the recession without downtime”, says Stevens. “Thanks to the good work of our employees and staff, we have a stable base to operate from and look forward to future challenges.”