While the Stella-Jones pole processing plants in Prince George and Galloway, B.C., both report to North America’s leading provider of utility poles and railway ties, each facility is responsible for managing its own operation independently. When it came to choosing a replacement for their aging log-handling equipment, the two site managers, working 500 miles apart, came to the same conclusion.

Bob Stewart was the Plant Manager in Prince George when the purchase of a Sennebogen 830 M-T was proposed to head office. “We looked at three or four different makes of machines last year, made our decision on Sennebogen and put together the business plan to acquire it.”

In Galloway, Richard Harkies was also shopping for new equipment. “We had already looked at the other two big names in material handlers,” he recalls. “Then Tom Truman (from Great West Equipment) came by and took us to see a Sennebogen demonstration in Lavington. We hadn’t actually heard of Sennebogen before then!”

Before the year was out, Galloway had become a Stella-Jones operation and the purchase of the 830 M-T machine went ahead. Great West Equipment delivered the first one of its 830 M-T’s to Prince George in January, and the second was delivered to the Galloway Mill in June.

The 830 M-T is a purpose-built material handler for trailer pulling. It has an undercarriage and transmission configuration that’s specially built to pull over 100,000-lb. log trailers.

For both the Prince George and the Galloway operations, the material handlers were fitted with Rotobec log grapples. They were also customized to widen out the tines and the tips to minimize damage to the wood. Each was then equipped with a live heel.

While the two sites differ in some ways in their specific application, their managers are equally satisfied that the 830 M-T was the right way to go.

The Prince George plant processes both utility poles and railway ties, so its log handler has to manage moving and loading square timber as well as round wood. “We stack the ties in packs of 25 for air seasoning,” says Bob Stewart. “Then we load the bundles onto gondolas for delivery. The 830 M-T pulls a tridem trailer loaded up to 75,000 lbs. It could be a larger-sized machine than we really need, but we wanted to be prepared for future demands, too. We anticipate that we’ll get 10 to 15 years of service from this unit.”

“It has a lot of hydraulic power,” he continues. “It takes a fine touch to grab a large load without damaging the wood. These controls are very user-friendly and the hydraulics are very responsive. We also find that the stance of the machine, with its wide wheelbase, is much better for getting around even in soft ground than what we experienced before.”

Richard Harkies also cites improvements in mobility among the advantages of the 830 M-T. “We have to drive a half-a-mile from one end of the yard to the other. With a separate transmission on each axle, it pulls smoother, and it doesn’t shift as hard, and it’s more stable.”

Harkies notes that the extra stability is especially helpful when the operator’s cab is elevated. “The high-lift cab is way better for loading rail cars, because you can see the top of the load. The operators can set it at the best height, for comfort, for whatever they are doing. In the spring, after the snow, you can get potholes, which can make it a little rough up there. The wide stance and pneumatic tires smooth out the ride for them.”

For Harkies and Stewart, the 830 M-T has provided a solution that meets their current, and future, production demands. 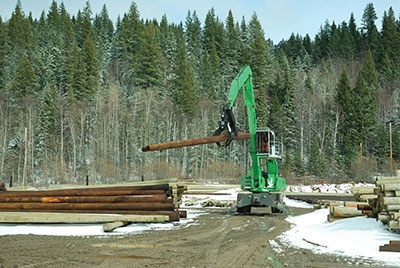 The 830 M-T material handler is fitted with a customized Rotobec log grapple to ensure minimal damage to the polls. While the Stella-Jones pole processing plants in Prince George and Galloway
Print this page