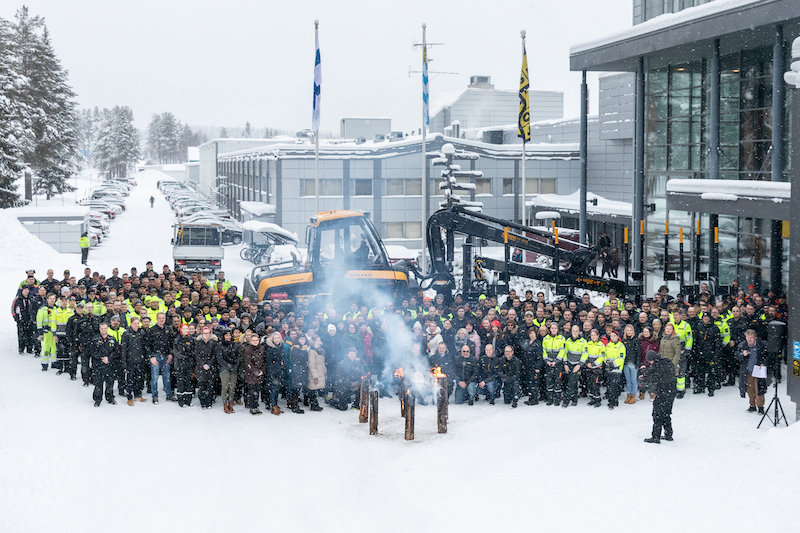 The 14,000th forest machine manufactured in Vieremä was handed over to the customer at Ponsse. The completion of the machine that will be delivered to Uruguay also offered the opportunity to celebrate Ponsse’s successful factory extension.

The Ponsse Elephant King machine at the centre of the celebration was manufactured on Ponsse’s new production line, which was introduced last autumn. The last stage of the factory extension was completed at the beginning of this year when a new assembly line for cranes was commissioned at the Vieremä factory.

The completion of the machine also offered the opportunity to celebrate Ponsse’s successful factory extension. At the beginning of last year, the 13,000th PONSSE forest machine was completed at the factory, and a topping-out ceremony for the factory extension was celebrated at the same time. This large investment increased the factory’s area to four hectares and completely renewed the factory’s assembly and warehouse operations. The change involved a major effort in terms of scope and impact from all production workers. The change has now been brought to a conclusion, and Ponsse’s factory is in excellent shape with respect to safety, productivity and flexibility.

The 14,000th Ponsse machine is the largest model in Ponsse’s forwarder range. Ponsse Elephant King equipped with the new Ponsse K121 crane, designed for the most demanding conditions. This week, the machine will start its journey from the freezing weather of Northern Savonia to the summer heat of Uruguay. The machine will harvest timber at UPM Uruguay’s plantations for local pulp production needs. UPM Uruguay has been Ponsse´s full service customer since 2014.

Ponsse has been operating in Uruguay since 2007 and opened new service centre in 2017. Local customer support is handled by Ponsse’s subsidiary Ponsse Uruguay. The subsidiary employs 96 people, and its managing director is Martin Toledo. In Uruguay, timber is harvested almost entirely with modern and environmentally friendly cut-to-length harvesting equipment.

“In Uruguay, the work of our local staff in customer relations, commitment and company development is outstanding. In a field requiring perseverance, Ponsse Uruguay has succeeded in establishing operations in a relatively short time which our customers can trust,” said Jarmo Vidgrén, sales and marketing director of Ponsse Plc.