Sept. 7, 2018 - In a 100-year-old Norwegian spruce wood lot, six Ponsse machines are lined up to show off their latest technology in the field. The wood lot is in Vierema, Finland, latitude 63, which is the same latitude as Iqaluit. Even though we are just a few hundred kilometres from the polar circle, trees are large compared to eastern Canadian standards, with many trees measuring more than 60 centimetres (24 inches). 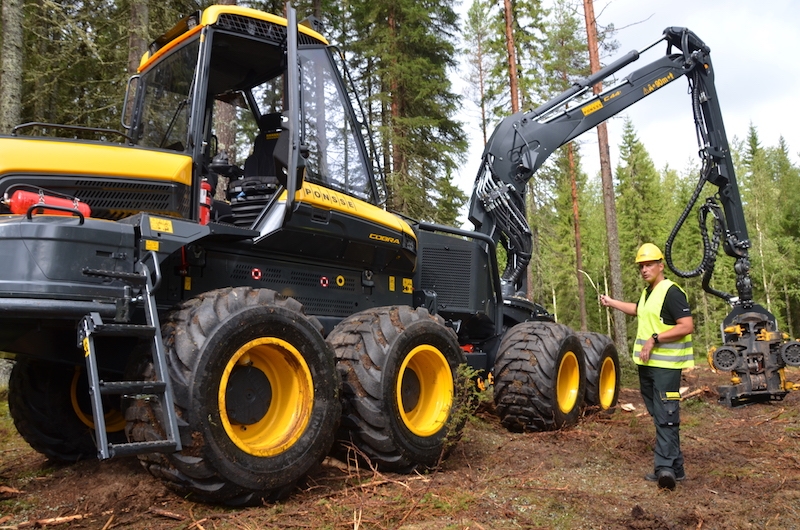 “This is not a typical wood lot, because the owner did not do all the thinning we are used to,” notes Marko Mattila, director of the Ponsse subsidiaries. Even if it’s not the best plantation they have, one thing is sure: Canadians can learn from Finnish foresters about ways to increase the forest productivity.

To reveal their newest gear, Ponsse invited 55 international journalists on a Finland forestry tour to see two machines in action: the new Cobra harvester and the first CVT forwarder on the market, the Ponsse Bison.

Ponsse Cobra
Our first stop is a viewing of the six-cylinder engine Ponsse Cobra. According to Mattila, the Cobra is more powerful than the Ponsse Fox, so it easily takes the Fox’s place as a more efficient way to achieve commercial thinning, yet is still powerful enough to effectively clear cut.

With an H6 harvesting head, the Cobra has a range of 11 metres (the Fox is 10 metres), which allows the harvester greater reach from the road. It is also possible to mount H5 and H7 heads on the Cobra, however, the range is reduced to 10 metres. There is just one hydraulic pump on this harvester, unlike the Ergo that has two, making it a simpler machine.

New Bison forwarder
Our next stop is to watch the new Ponsse Bison forwarder in action. According to Ponsse, this forwarder is likely to create a small revolution in forestry thanks to its continuously variable transmission, which allows to go from zero to 20 km/h without shifting. “This is an evolution as important as what we did with the Scorpion harvester because it is the first CVT forwarder on the market,” says Ponsse’s Antti Riskinen.

Because the transmission adjusts the speeds automatically an operator can drive loaded at 10 or 15 km/h without having to change gears. “It’s a huge gain because other forwarders cannot go much faster than three or 4 km/h in first gear,” adds Mattila. “It will bring huge gains in productivity.”

The Bison forwarder has a capacity of 16 tonnes and it is equipped with an “Active Frame” cabin, which levels the position of the cabin for more operator comfort. The lubrication of the transmission is pressurized as well, which improves performance in difficult conditions such as steep slopes.

New features: K121 loader, active crane and more
For the rest of the day, we get to see all the new features designed by Ponsse, like the new K121 loader, offered on the Elephant and Elephant King carriers, which offers more power and more speed for handling logs with a lifting power of 195 kNm.

Controlling a Ponsse carrier has never been easier than with the new Ponsse Active Crane feature, which allows an operator to control the movement of the grapple instead of having to adjust all the individual functions. Even I — with no experience whatsoever in operating forestry machines — managed to load some wood. One lever controls the height of the grapple while the other controls the direction. The system takes care of lifting, folding or lengthening the crane.

Ponsse also added a longer forwarder bogie with a hub distance of up to 1,890 mm (6.2 feet) and a new compact simulator. They also added new features to the Ponsse Manager computer software like the hydraulic pump condition monitoring. For the European market, Ponsse also introduces the Final Tier 5 engines.

“We want to be the leader in cut-to-length machines by focusing on the operator’s needs,” says Juho Nemmela, Ponsse’s president and CEO. Nemmela says they plan to take advantage of growing international markets. Over the last few years Ponsse has seen its market share grow continuously with sales reaching 577 million euros in 2017 (CAN $886 million).

Factory expansion
To sustain their growth, Ponsse made a huge investment in 2016 when they decided to expand the factory floor by 1.3 hectares, increasing in size to a total of four hectares. This $58-million investment improved the company’s capacity, which is now able to build close to six machines per day.

The factory is almost completely redesigned. Machining for frames, cranes, etc., is now set up on different lines that all feed in the main production line. Each step in the production process takes around 165 minutes to complete and it takes three days for a machine to go through the full assembly line.

Another new addition: a giant warehouse robot taking care of all parts. The storage automation includes 15,500 storage compartments for small goods and 3,900 pallet places that significantly improve the storage logistics productivity. “It’s a bold move, because these robots are usually used for the car industry,” says the 41-year-old CEO. “But once in a while, we need to have the courage to do something like this.”

As a result, Ponsse is now more flexible when it comes to adjusting production according to its customers’ needs, Numella adds.

Success on values
Visiting the Ponsse team, at the factory, on the forest or at the Ponsse Club, is like meeting old friends for a beer (and maybe a sauna). And this is not a special treatment just for journalists. Customers also have the opportunity to come, visit and spend some time with the team to feel the “Ponsse spirit.” A week after our visit, Ponsse invited more than 500 international customers for field visits and the FinnMETKO exhibition.

Even though Ponsse is now dealing in the hundreds of millions of dollars every year, the business remains focused on daily basic human values, says Juha Vidgren, chairman of Ponsse’s board of directors. “My dad, Einari, brought values like honesty and trust when he founded the company back in 1970,” he says. “These value are still the basics of our actions.” After World War II, life was hard in Finland and Einari Vidgren slowly became an influential forester to feed his family. Since the machines did not fit his needs, he decided to start building them, giving rise to Ponsse in 1970.

Fifty machines were built in the first decade and all the profits were reinvested to make the company grow. Today, Ponsse machines are found in 47 different countries, and the Finnish manufacturer has not lost track of its vision to become the world’s cut-to-length leader.