Big things have been happening in the southwestern corner of New Brunswick, especially for anyone interested in reducing production costs at medium density fibreboard (MDF) plants while also improving ambient air quality conditions. 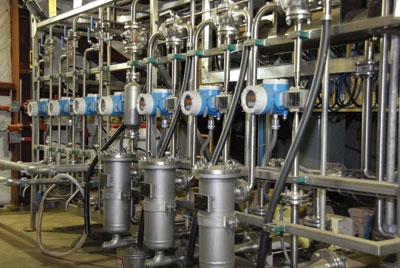 The work being done at Flakeboard’s MDF plant in St. Stephen, N.B., a town of approximately 5,000 people that shares an international border crossing with Calais, Maine, revolves around dry resination technology. The St. Stephen plant, which produces thin MDF under the name of Fibrex, along with particleboard products, spent several years developing the technology, which is now owned and sold under the trade name of EVOjet™ by Sunds MDF Technologies in Sundsvall, Sweden. Sunds MDF Technologies is a division of German panel equipment products producer Dieffenbacher.

This innovative technology allows high-quality MDF to be manufactured using a post-dryer resin application, rather than the industry standard pre-dryer configuration. 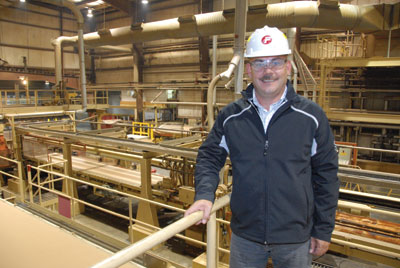 “Conventionally, in the production of MDF, the resin is applied before the drying process at what we call the blow line,” explains Rodney Walsh, project manager at Flakeboard in St. Stephen. “At this plant, we are producing a thin MDF product and in doing so, a percentage of the resin was being flashed off in the dryer stacks into the atmosphere, and as such, its intended effect is lost. Resin is one of the most expensive inputs for us and what the EVOjet process provides is a methodology whereby the resin is applied after the drying process. By doing this, we are realizing resin savings of 40%. Additionally, we realize the environmental benefit of reducing our formaldehyde emissions by 50%, which is also significant.”

The environmental and economic benefits have compelled many companies to attempt dry resination technology in the past, but the results have often been inconsistent. The EVOjet technology was developed and tested by the St. Stephen plant before Flakeboard patented the process and initially licensed the tech-nology with Dieffenbacher.

“We started this venture in early 2000 but it wasn’t until 2006 that we formed the partnership with Dieffenbacher,” Walsh says. “That was the point where we knew the technology was marketable.”

First on Board
Flakeboard’s MDF plant in Eugene, Ore., was the first thick MDF plant in North America to adopt the technology after the partnership was formed. The move allowed the Eugene plant to achieve compliance with stringent federal environmental air regulations, while simultaneously satisfying goals for increased operational efficiency and enhanced product offering. Today, the plant utilizes 100% post dryer resin addition.

With the success of the first generation of EVOjet at the Eugene plant, the St. Stephen staff went to work on the second generation of the technology. The plant was operating the dry resination prototype on its Fibrex I MDF Line, but switched to its Fibrex II MDF Line for the second generation of EVOjet development and testing. Today, the Fibrex line is running at reduced capacity due to market conditions. However, Walsh says they have still been able to make technological advancements with the product, and he adds that Sunds MDF Technologies has sold several of the second-generation systems in Europe, South America and Asia. In North America, patent and licensing agreements provide Flakeboard’s plants with an exclusive on the product
until 2013.

“At Flakeboard we have a culture of continual improvement and we constantly focus on process optimization and our research and development doesn’t stop,” Walsh explains. “We do all of the work in–house and have an exceptional team of dynamic, multi-talented technical staff working on this. Plus, as part of Flakeboard, we have the largest composite panel manufacturer in North America behind us.”

Investment
To date, the St. Stephen plant has invested about $8 million in upgrading its Fibrex II Line with the EVOjet technology.   When the line was running at capacity, Walsh says they spent about $7 million annually on resin, so with a 40% reduction in resin consumption courtesy of the EVOjet technology, he predicts a savings of about $3 million annually and a payback on the project of just three years. “That’s under normal production conditions,” he adds. “But there are also the environmental benefits, which is good news for the communities in which we operate.”

At St. Stephen, Walsh says the plant was already well below the regulatory guideline for formaldehyde emissions. They were permitted to release 125 MT per year, but were traditionally at 65 MT annually. With the second generation of the EVOjet technology in place, that number will be closer to 30 MT per year.

Walsh says that, like other producers that have attempted dry resination technology, they have not been without process challenges. This past fall, they were still dealing with one of the most persistent issues, which is contamination on the board surface.

“What happens is the freshly resinated fibre wants to stick to the internal components of the system,” he explains. “Over time the resinated fibre breaks free and ultimately ends up as contamination on the board surface.  This causes quality issues when the board is upgraded at our painting or printing finishing lines.”     To minimize the contamination, Walsh says they needed to address the resinated fibre buildup on the internal components. The company invested $150,000 in the solution, which included the installation of a spike roll into the existing air density separator (ADS). The function of the spike roll is to disintegrate resinated fibre and to increase the material velocity into the ADS, and as such improve its performance .“This was a major step forward for the process ,” Walsh adds.

For MDF production, the St. Stephen plant uses hardwood chips sourced primarily from Crown land. The Fibrex I Line is a Mende calendar press, while the Fibrex II Line is a Bison hydrodyne continuous press.

The production flow for the Fibrex II Line begins at the plant’s on-site raw material storage facility, where the chips are offloaded from trucks into a series of hoppers. A series of high-pressure pneumatic conveyance systems transport the chips to the refining equipment where they are delivered through a thermal mechanical pulping process, including a digester, before going through a 65 MMBTUH flash tube dryer. Prior to the installation of the EVOjet system, the resin would have been added before the dryer.

After the dryer, the refined fibre passes through twin dryer cyclones and then into the EVOjet system where the resin application takes place.  Following resin application, the now resinated fibre passes through the spike roll assembly and ADS system and is then transported by fan to the forming station at the press line. Fibre flows out of the forming station into the press pre-zone and then onto the Bison hydrodyne continuous press that is equipped with side saw trimming capabilities. Out of the main press, a Kontra saw system cuts the master panels to size. Master panels are then assembled in books where they are cut into smaller sized panels before entrance into an automatic strapping station.

Walsh says 25% of the plant’s MDF production is sold as raw product, while 75% is placed into inventory for value-added upgrades, including painting, printing, lamination, pegboard and cut-to-size products. Shipping is primarily by truck, but some is also done by rail. End uses for the mill’s MDF products, which range in thickness from 2 mm to 6.5 mm, include cabinetry, office and residential furniture, recreational vehicle finishing, and fire retardant products.