Sept. 4, 2014 - Following on the footsteps of a successful planer upgrade at Foothills Forest Products, C&C Forest Products of Quesnel, B.C., has invested in the planer mill at another one of its sawmills. Edgewood Forest Products, in Carrot River, Sask., has installed a new VAB inline auto grader along with a rotary lug loader and a live positioning fence. The upgrade was managed by Wolftek Industries out of Prince George, B.C. They supplied the log loader and Do2 Industrial supplied the Live fence. A local electrical contractor, Perrin Electric, worked on the electrical side.

Previously owned by Weyerhauser, C&C bought the mill and reopened it after it had been shuttered for five years. It has been running under current ownership since January 2012, and mill manager, Byron Warner, says there are a number of improvements they’re looking at implementing throughout the mill.

“There are lots of modernizations we can do in our process that we run here so we are definitely looking into other things in the future,” says Warner.

Optimizing grading was the first of a long line of updates the mill will enjoy. It was a natural start because it offers a great return on investment and a very short payback. Manual graders can tend to downgrade lumber if there is any doubt between two grades, cutting into a mill’s profit. Switching to a machine makes the grading close to 100 per cent accurate and results in more high-grade lumber to sell.

There is also the ability to more closely follow market trends. The mill operator will input parameters, taking market demand and production-to-date into account so the machine will grade the boards and drive trim decisions based on the highest possible value at that time.  It has also driven production higher.

“We wanted to be able to run faster and all of this is increasing our productivity,” Warner explains. He estimates that since the planer upgrade was installed, throughput is up 20 per cent and the mill’s two and better output is up five per cent.

The planer upgard came online at the end of January after losing only five days of production. The mill is still measuring the return in some areas. “We had hoped we would see a change in our trim loss but it hasn’t changed very much, so I don’t know if that means we were doing a really good job [before the installation] or if we don’t have enough data yet, but we’re working on that as well.”

“We had looked around a little at different stuff that was out there and I kind of followed our Foothills mill,” Warner explains. They had positive results, “and we felt that we would too.”

Warner also noted that it makes sense to have one type of machine in the company to simplify the implementation, service and training. There have been some initial growing pains, however, since the modernization required a change to the whole outfeed of the planer, which is very close coupled. Warner has found it necessary to have someone nearby in case a broken board falls on the table since the machinery is in such tight quarters.

“If we can get it so that the board falls away from the table, we’ll be able to do that. But right now it looks like we’re stuck with one person there but you never know; someone will come up with a new idea and we’ll fix that,” he says confidently.

The mill currently employs about 80 people. The displaced lumber graders were absorbed into other positions in the mill, not surprising given the employment rate in the booming province: “We’ve put some into maintenance and some into production but we’ve just kind of absorbed them because we are still growing.”

“We started in 2012 in January and we’re working our way up trying to get two full shifts on the sawmill running,” he says. Like many sawmills, Warner has been challenged to find the staff required to run the mill at full tilt. “Our log supply is the reason we’re not there. We’re having trouble getting contractors into the bush to cut our logs,” he explains.

The sawmill has made some progress recently since it is in its second year of operation and has demonstrated resiliency thus gaining the trust of local contractors.

“Logging was pretty well shut right down in Saskatchewan for four or five years. There were a couple of companies that still ran through it but there wasn’t a whole bunch of sawmills around.”

As in other parts of the country where the forest industry experienced a sustained decline, workers bled into other industries that were booming in the interim. Many forestry skills are easily transferred to positions in the nearby oil sands, which can provide lucrative pay when forestry is on the wane. But as the industry demonstrates its feasibility, workers are returning home to the forest economy, which offers its own rewards.

Warner is hoping Edgewood is able to produce 65 million board feet of lumber this year, producing everything from a 1x3 to a 2x6 in eight- and nine-foot lengths of SPF. In a stud mill like Edgewood, an autograder can produce a significant grade uplift. It will pick up face and edge wane, skip, twist, bow and crook, decay, rot, white speck, splits, shakes and other defects without any contact with the boards.

The boards go through a scanning tunnel with cameras; it’s a simple linear process with a small footprint that makes it adaptable to older mills with tight spaces.

It’s still too early in the project to get a clear picture of how much ROI he’ll see, but Warner is happy with the early results. “It’s all pluses. It’s going really well,” he says. 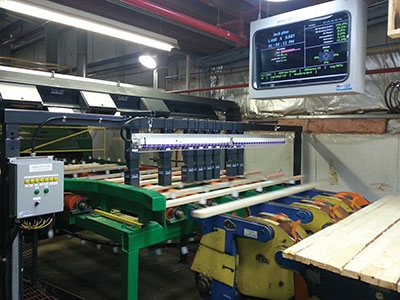