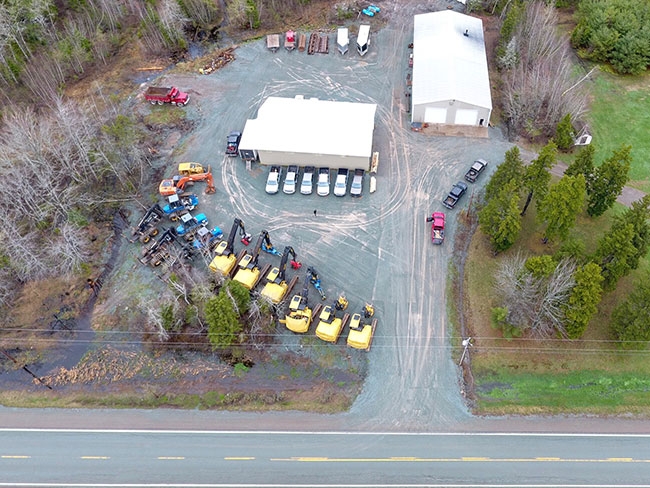 The third-generation logging business also provides its own harvested wood from its land base in the Amherst Darrin Carter has been logging for 32 years.

Darrin Carter has been logging for 32 years. Like many other contractors in the industry, he first got into the business working for his father. When he reached 20 years of age, he decided to strike out on his own.

Carter started up his own business with a forwarder and a few good men trail cutting with power saws in the forests of Nova Scotia. But those few good men became harder to come by, so when the main company he was harvesting for approached him to discuss investing in new harvesting equipment, he listened.

“The company at the time, Scott Paper – now Northern Pulp –approached me in 1988 to buy a feller buncher to go mechanized,” Darrin recalls during a recent interview with Canadian Forest Industries in Moncton, N.B.

Darrin ended up purchasing a Koehring 618 feller buncher, which was his trusted harvesting tool of choice until the mid-90’s when he decided to expand his fleet further.

“All I had was the feller buncher until ’96 and then I bought a Target processor and a Rottne forwarder to go behind the buncher,” Darrin says, adding that he still has his first processing head. “We don’t use it, but we still have it in our yard.”

This was when Darrin started to provide his own harvested wood from his land base in the Amherst, N.S. area under his company Darrin Carter Logging – in addition to harvesting other fibre supplies – and, from that point forward, his fleet just continued to grow.

And of course, with a growing fleet, comes a growing team. The company now has 18 employees and currently runs two shifts harvesting 95 per cent of its fibre for Northern Pulp, based out of Abercrombie, N.S. with an annual production of about 110,000 tons.

“I’ve been contracting with them for 32 years,” Darrin says, proudly. “We’re one of Northern Pulp’s largest producers.”

Although all of the pulpwood from Darrin’s logging operations goes to Northern Pulp, his company harvests a variety of species. The hardwood is sold to Groupe Savoie’s Westville, N.S. sawmill, while the stud logs go to J.D. Irving’s Sproule Lumber sawmill and the rest of the logs go to Elmsdale Lumber.

Between five and 10 per cent of all the harvested logs come from Darrin’s land.

A family affair
These days, in addition to managing the day-to-days, Darrin, now 52 years old, mainly splits his time between mechanical work and welding at the shop, and training his two eldest sons to be able to take over the family business when he chooses to retire.

“I’m planning working until 55 then becoming an operator,” he says.

Justin, 26, has worked in the family business for 10 years, and currently splits his time between working as a mechanic in the shop keeping the fleet running, and as the company’s harvesting foreman.

“I love the skills I get to learn, and getting to do things with your hands,” Justin says. “I really liked [operating] the processor, but I don’t have time to run it anymore. My favourite part of the job is fixing machines, although I don’t like them breaking. Just love to repair them and solve problems.”

Justin also really enjoys watching the natural evolution of an area after it has been harvested.

“When we clear it and then go back and see how it grows back… it’s pretty impressive,” he says.

Justin supervises the larger of the two harvesting operations, which has bunchers running in two 10-hour shifts.

“We tried running 12-hour shifts but found that 10 hours is more productive and everyone was happier,” Darrin says.

Cody, 24, has worked in the family business for eight years. He oversees all the safety aspects of the business in addition to supervising the second harvesting operation, which runs as a single 10-hour shift.

Darrin also has two younger sons, Mitchell, who went to school for engineering and decided to follow a different path; and his youngest son, Kyle, who is currently taking a heavy-duty mechanics course.

“I’m pretty sure the youngest one will be joining the business as well,” Darrin says.

Although the shop stays busy, employees are trained to be self-sufficient when out in the woods.

“All of our employees do their own repairs whenever they can,” Justin says.

If it ain’t broke…
As far as future ventures go, Darrin says he is looking into adding selective thinning into his operations. Otherwise, the third-generation business isn’t looking at tinkering with too much of its operation.

“We have a really good chemistry of employees,” Justin says. “It seems really good the way it is now.”

“We have really good employees, some of them have been here for 20-plus years,” Darrin says, adding that his family aren’t the only ones in his business carrying on a family tradition. “I’ve got one fellow that has worked for me for 25 years, and now, I have his son-in-law.”