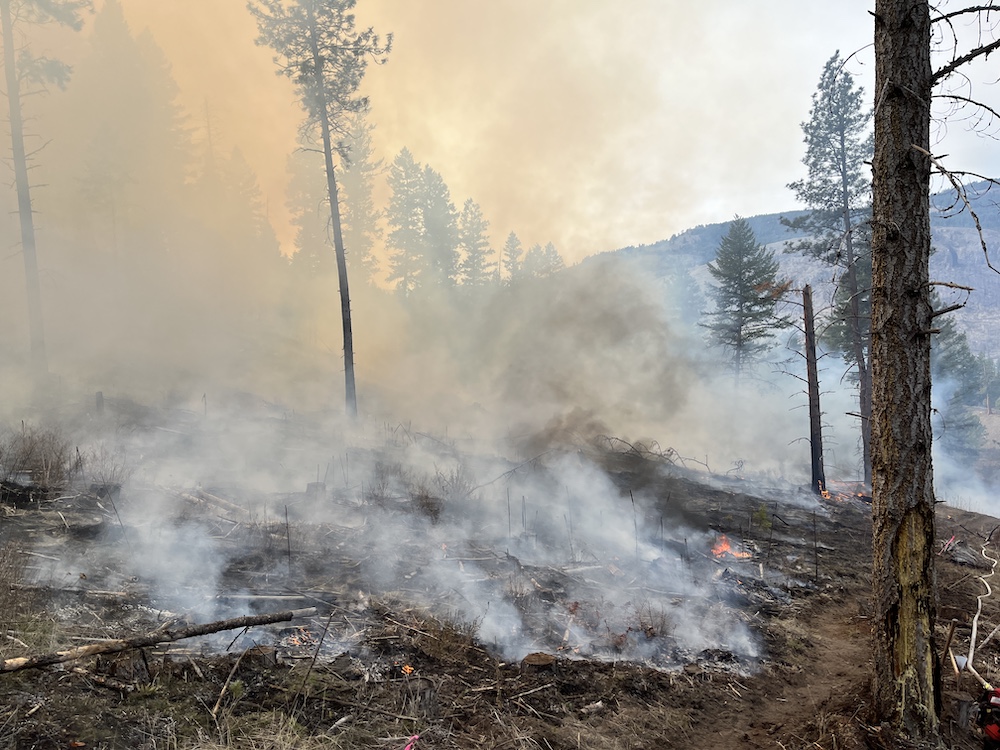 A prescribed burn in the Rexin area, northeast of Rock Creek. Photo by Peter Flett.

West Boundary Community Forest (WBCF), recently partnered with the Osoyoos Indian Band, the Penticton Indian Band, the Ministry of Forests and the BC Wildfire Service (BCWS), to undertake a prescribed burn in the Rexin area, northeast of Rock Creek, B.C.

The burn was conducted on April 7, 2022 to enhance wildlife habitat, while reducing fuel load density, and associated potential wildfire risk.

Vaagen Fibre Canada’s Peter Flett, who was one of the project partners through WBCF, was extremely happy with the success of the burn, which was in close proximity to the community.

“It is the first burn we have been involved with that was so close to the community. It’s a great introduction to prescribed fire to the community,” he said, adding that while this burn covered one treatment unit, there will be several other prescribed burns planned for the future in the region.

“This prescribed burn was mainly geared towards ecosystem restoration, to eliminate some of the ground vegetation and promote regrowth of native grasses. It will also help to improve wildlife habitat and support water quality objectives,” said Flett. 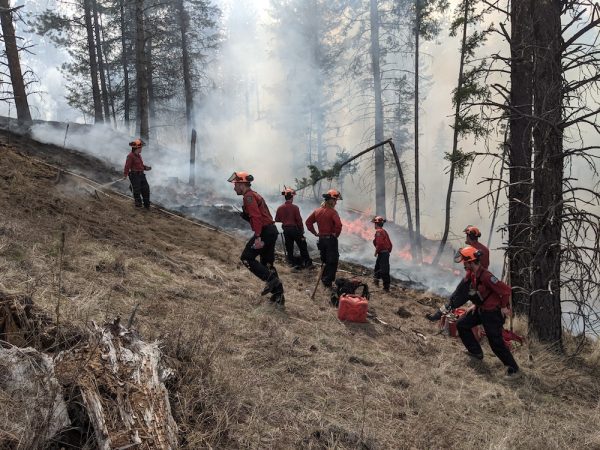 James Katasonoff, Wildfire Officer with BCWS’s South East Fire Centre, said that not only was this a great opportunity to implement traditional practices in the forest, and form partnerships and relationships, but was also crucial in mitigating wildfire risk in the future for the community.

“Our ecosystem here in Boundary is called NDT 4 ecosystem, which means it traditionally has had natural, lightning-caused, low intensity fire, and the ecosystem in the area has evolved to need fire, to function properly. So, this burn is a good opportunity to bring the beneficial fire back in a controlled manner and when it is close to a community like this, any reduction in the intensity of wildfire that could happen in the future, is always positive,” he said.

Brody Armstrong, the Penticton Indian Band Natural Resource’s project manager, agreed and said that the project was two-fold. “The burn will not only serve as a fire guard, but it is mainly a rejuvenating and replenishing practice, to help the land. It is a win-win all way around,” he said.

Armstrong said that when completing these prescribed burns, the First Nations’ people attributed value to everything when writing prescriptions.

“We are looking at saving a lot of old growth trees, saving a lot of habitats, all the little animals that don’t really have a voice. It is a holistic way of doing a burn. It is a marriage of traditional burn practices with contemporary practices,” he said. 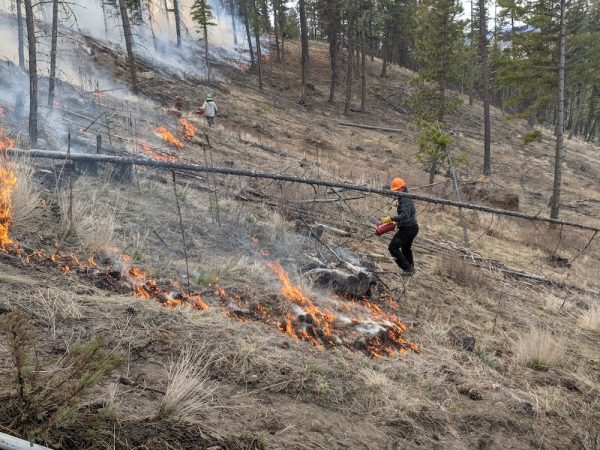 Vern Louie, the forestry manager with Osoyoos Indian Band, also emphasized on the importance of traditional burn practices and why he thought this prescribed burn was especially essential.

“In the past it was always done this way, as a community. I want to help raise awareness about getting back to traditional prescribed burning, involving communities more, and helping them understand that fire isn’t always something to fear. If burning can be done in a safe manner, I want to raise awareness on its importance,” he said, adding that Elders in the Band were really happy with this prescribed burn and how things were planned. They want to see everyone getting back to traditional burning, said Louie.

Having these traditional values and experiences from both, the Osoyoos Indian Band, as well as the Penticton Indian Band, proved to be extremely valuable for making this project a reality, according to ecosystems biologist Lindsey Dewart.

Dewart, who worked on the project through the Ministry of Forests, said, “This project wouldn’t have happened without working with the First Nations. Coming in to this project, I relied heavily on the historical knowledge of the traditional knowledge-keepers and their advice, from both Bands. They have been invaluable partners to work with on this.”

She also noted that a project of this scale wasn’t possible without the support and partnerships from several organizations and companies such as WBCF, Vaagen Fibre Canada, the local First Nations, and local recreation groups.

Dewart also confirmed that the project was especially important because of its overlapping values of wildfire prevention, as well as ecosystem restoration. She said one of the ways they determined the area for the prescribed burn was by looking at historical ecosystem fire regimes, and what those looked like before the 100-years of fire suppression, to protect communities and resources.

“We do this by looking at fire scars in a tree, to assess how frequent fires were experienced in an area, without reaching the severity of actually killing the trees in the forest,” she said. “So, trying to bring that regime back into the ecosystem is so important. From an ecosystem point of view, one of our objectives is to increase the diversity of species, as well as the abundance of species.”

“What I have become aware of, is that there is a lot of fear around fire; and understandably so. It can be very destructive but it also can be used and has been used for generations to benefit ecosystems and to reduce the risks of really big, catastrophic wildfires as well,” Dewart added.

The community of Rock Creek, B.C., went through a devastating wildfire back in 2015; a fire that grew to an estimated 800 hectares within hours, prompting evacuations of hundreds of homes. Avoiding such a scenario in the future is also important for the group, and this latest prescribed burn will help with that while restoring a lot of the area’s natural habitat.

Flett, who coordinated with all these project partners for the burn, expressed how great it was to be a part of the burn that had so many implications for the ecosystem and the community.

“We are fortunate to be a part of the burn and glad the Penticton Indian Band, Osoyoos Indian Band and BC Wildfire Service led the project because for something of this scale and in the backyards of the community, it needs to be directed by the experts,” he said.