Just six years earlier in 2007, construction had begun on Athabasca OSB. Commissioning was completed in mid-to-late 2008 and the plant began to feed panels into the North American housing market. But just a few short months later in February of 2009, with the U.S. housing market crumbling and demand for OSB shrinking, Tolko was forced to shutter the mill until further notice.

It took four long years for Tolko president and CEO Brad Thorlakson to be confident that the demand for Oriented Strand Board (OSB) had returned and that it would be sustainable moving forward. “We are confident about the future of the industry and look forward to positive years ahead. Reopening Athabasca confirms our commitment to meeting the needs of our customers through innovation and product development,” said Thorlakson during the announcement that work would begin to reopen Athabasca OSB.

So on February 12th of last year, the announcement was made that Athabasca OSB would produce panels once again.

The plan called for Athabasca OSB to restart production in the first quarter of 2014. But by July of 2013, all of the senior management had been put in place, and the group represented close to 300 years of combined experience in the production of OSB. It put the plant in a good position as they moved forward with the process of getting the plant
back online.

“We were able to bring the plant back into production in December of 2013, a few months ahead of the original target,” said Mark Cunningham, Plant manager at Athabasca OSB. “The team has done an outstanding job getting the plant ready to run, and then commissioning and producing the first panels.”

Upgrading the site
One of the reasons why Tolko was successful in getting the plant operational ahead of schedule was that they identified important upgrades before work began on restarting the mill.

Tolko looked at the entire mill site, determining which parts of the process were in need of a better, more efficient system to meet the new demands for production. It was determined that the first stage of the mill process was in need of a change.

“In our wood room, it was identified that there was a bottleneck with the existing jackladder system for conveying logs into the debarkers,” says Cunningham. “We embarked on a project of tearing out the jackladders and installing a Tanguay that we knew would be able to supply the logs to the debarker and supply the furnish required to run the lines at an efficient speed.”

While the change to the in-feed system was made to help improve the production process, another major change was made strictly to satisfy customer demand. Tolko recognized that there was also a demand in the housing market for roof panels, but that would involve the installation of a new system.

“We did an upgrade to our press by installing a screen belt; an imprint screen on the top belt,” explains Cunningham. “It was identified that the imprint screen would open markets for us in the roofing business building houses. It was a market-driven upgrade.”

Moving business forward
The upgrades and additions to the mill have provided Athabasca OSB with a process that they are confident will be successful for producing high-quality OSB and Laminated Strand Lumber (LSL) for the Canadian and U.S. housing markets.

Most of the wood mix is acquired locally from contractors within Alberta. The mix consists of approximately 70 per cent aspen, along with black poplar, birch, pine and spruce.

The logs come into the mill via conditioning ponds where they are heated using thermal oil. After approximately seven hours, the logs are lifted into the Andritz rotary debarking system, using a rail-mounted Tanguay PL350HD grapple loader. The debarkers remove 90-95 per cent of the bark before they are fed through a magnetic detection system and onto the transfer decks. From the transfer decks, the logs are fed to a pair of Carmanah stranders that reduce the logs to 7” strands. The Carmanah stranders use a Deltech hydraulic system to provide power for the system.

Bins hold the wet strands before they are screened and fed into one of the Buttner dryers. From there, the strands progress through one of three coil blenders and the mat formation process begins as the boards move down the forming line towards the Siempelkamp continuous press.

At approximately 71 metres long and 2.5 metres wide, the press is the largest of its kind in OSB manufacturing in the world. The press was installed during the original plant construction in 2007 and maintained throughout the four-year shutdown. Invaluable to Athabasca’s OSB production, the press gives the company a distinct advantage for producing a high-quality board.

“The length gives you a lot of control over thickness variation when you press the panel,” says Cunningham. “We will make a very high quality, consistent panel through this press, which is what our end users and customers are going to want.”

Once the panels have been pressed and cut, the panels are conveyed to the Samuel Strapping system to be packaged for shipment. Most of the panels will leave the mill by truck, or by rail shipment with infrastructure in place for both on the mill site.

Better market position
The end result of refining the production process at the mill has been a better ability to access markets from a stronger financial position.

The installation of the imprint system gives the mill the ability to make the rough surfaced panels needed for that market. Also, a double diagonal saw cutting system opens up broader markets without creating boards that are more difficult to sell.

Cunningham explains: “We can easily make nine to 10 foot panels on site. We don’t have an off cut like most daylight presses would have – which produce a nine foot panel but have a six foot board left to sell, they make a 10 foot panel but have four foot panels left to sell – because they can’t physically make it in their presses. We just set our saws and run a nine-foot or a ten-foot board. That is what a lot of house construction in the western part of the United States demands.”

The mill is also set up to better handle varying thicknesses of panels in order to meet customer demands. With the changes made, the mill can make 19/32, 23/32 and 1 1/8 inch thick panels as well as rim board and web stock.

There is also the possibility of adding to the line if changes in market conditions create the need for a longer panel. “Down the road, we will be able to add equipment and go to a longer length than 24 ft., which could give us a leg up that others producers won’t be able to match.”

Focused on quality
Every component of the mill process is designed with quality in mind. From the wood used to create the panels to the work environment that has been created, the end result focuses on providing the best quality possible.

The commitment to quality includes the production of seven-inch strand to produce OSB at the mill. The plant looked at other sizes of strand to use in its operation, but came to the conclusion that seven-inch provided the best possible end product.

“Longer strand can give you better board possibilities,” says Cunningham. “At this plant, we feel we can make the seven-inch work for us, and give us good board properties and allow us to get in to some strand lumber markets (LSL/OSL). That’s why we focused on seven-inch strand.”

Cunningham admits that using that length gave the mill a lot to learn. The company needed to understand how the dryers would work with seven-inch strand versus the more traditional sizes of three-and-a-half to six-inch strands. Also, the press operators had to learn how the longer length varied the process in comparison to the shorter strands.

“We have been very fortunate with the people we have brought in from across Canada. Good tradespeople are hard to find.”

Hiring good tradespeople to fit in with the team is always difficult, with many companies having to look overseas to fill some positions. At the Athabasca mill, a few of the electricians on staff have come over from Ireland, but the mill has been able to attract millwrights from within Canada.

“We have been fortunate that some of them have worked in OSB, so they bring that skill set with them and are familiar with the business. These guys want to be here, and that always helps the team.”

The demographic of the team has also been a big plus, with workers in all departments ranging from their 20s to their 60s. That has provided a lot of leadership and mentorship, which has contributed to the success of the staff and the mill. It has also created a lot of positive energy as the mill ramps up production to capacity.

“These are exciting times for us. Our staff wants to get the mill running. They want to be producing boards and are excited about it. There is a lot of energy when you are out amongst the team.”

That energy can also be felt in Slave Lake, a community that is happy to have Tolko’s Athabasca OSB mill back up and operational.

“The community has looked forward to this mill restarting. They are very supportive of what we are trying to do here.” 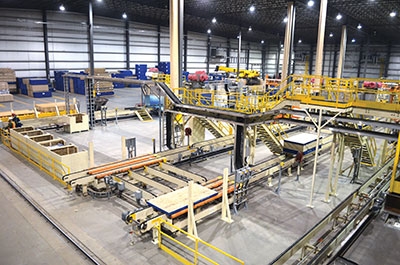