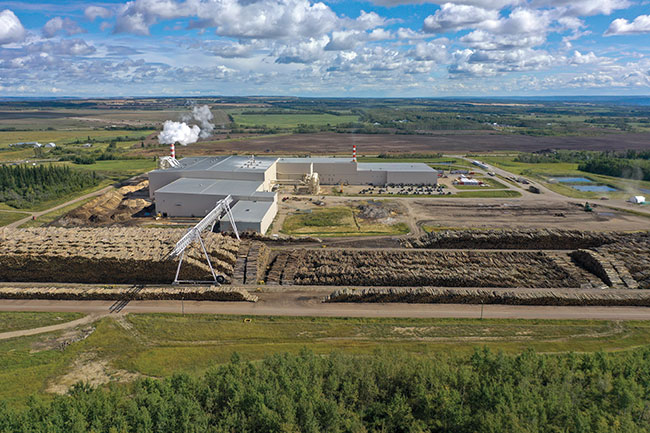 In 2019, when the forest industry was in the midst of a severe downturn, Louisiana-Pacific (LP) made the tough decision to temporarily curtail its Peace Valley oriented strand board (OSB) mill in Fort St. John, B.C.

But in February 2021, after seeing the market turn around in 2020 with record-high prices and demand for wood products, the company decided to reopen the mill. In June, LP Peace Valley pressed its first board since the curtailment, and the mill is now moving full-steam ahead with plans to add an additional shift to boost production capacity.

The mill first began operating in November 2005, when it pressed its first board for commercial sale, explains LP Peace Valley plant manager Kelly Head. At the time, it was a joint venture between two companies, Louisiana-Pacific and Canfor. In 2012, LP acquired a full stake in the mill and became the sole owner.

When LP decided to curtail the mill in August 2019, they kept it in a “ready state,” Head says, with the “intention to reopen it when we were confident that sustainable market demand would be back and it would be sufficient to absorb the capacity of this mill.”

So, the company kept a small team of 20 employees at the mill to take care of the facility and the equipment.

“It’s because of their efforts that this mill was actually in a very good position to reopen when that announcement was finally made,” Head says. “They maintained the facility, doing things like rotating shafts and making sure that what could be run was run, just to make sure it was in a ready state. That really enabled a quick turnaround from curtailment to operations.”

In fact, when LP announced its plans to reopen the mill in February 2021, the goal was to press the first board in July. But, the mill actually beat that timeline, with operations starting in June. 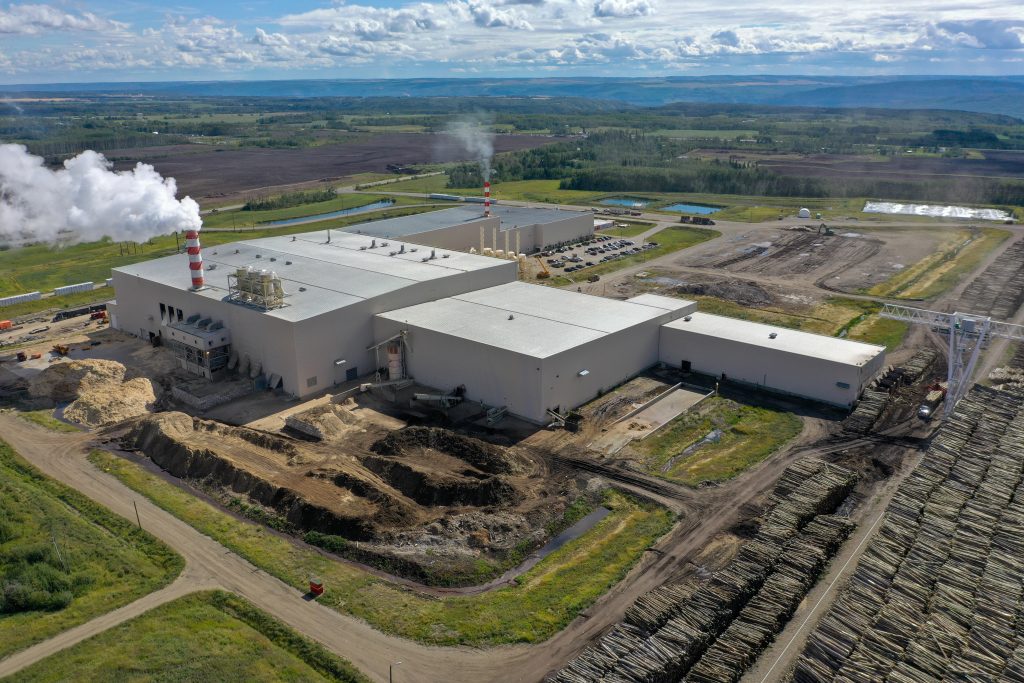 Despite this success, Head says there was one challenge to restarting production, something that is common to all mills across the country: hiring.

“The labour market – not only for the wood products manufacturing industry but for many industries – is very tight across all of North America right now. We went from that small group of 20 employees to 140 in just a handful of months. In that labour market, it’s not a very small feat,” Head says.

A few managers on-site at the mill were in charge of recruiting, and they did an “outstanding job,” Head says, with very little turnover in that time.

Now, LP Peace Valley is operating at planned capacity. At full capacity, it can produce approximately 800 msf on a three-eighths of an inch basis. The mill primarily manufactures its products from aspen, as well as some balsam poplar, taking around 20-foot-long logs.

The majority of fibre for those products comes from LP Peace Valley’s non-replaceable forest licenses in the Fort St. John timber supply area (TSA). The company hires logging contractors to harvest the logs, and also purchases wood supply from private landowners and other sources in the region, Head says.

The mill is now running three shifts, and LP is in the midst of hiring for a fourth one. This will help the mill meet demand for its three core product families, which are delivered to customers in western Canada and the U.S. – commodity products, such as sheathing and building envelope products; long-length OSB (greater than eight feet); and LP’s TechShield Radiant Barrier product.

According to Head, the TechShield Radiant Barrier product was pioneered by LP in the 1990s, and has since been installed in approximately two million homes.

“It blocks up to 97 per cent of the radiant heat in roof panels, and it can actually lower temperatures by about 30 degrees Fahrenheit,” he explains. “That’s a big deal in our southern markets.”

From logs to OSB

To produce those products, logs from the Fort St. John TSA are first brought in via truck. The majority are then put into inventory. Once they’re taken out of inventory, they go to the mill’s conditioning ponds, which serve two purposes, Head says.

“The first is, it’s very easy to transport a large volume and a large weight of wood in water. It’s a lot easier in water than it is using chain conveyors,” he explains.

The second reason is because the mill operates in an extremely cold climate for most of the year. Conditioning ponds help thaw the wood out in the winter, which results in longer, better-quality strands in the OSB process. Head compares it to cutting two blocks of cheese – one that has been kept out at room temperature overnight, and one that has been kept in the freezer.

“The difference in results is dramatic. With the room-temperature one, you get a nice slice; the frozen one just breaks and shatters into small pieces. And wood is no different,” he explains. “If you go to strand wood…and that wood is frozen, you’re going to shatter it, and you’re going to end up with a much smaller strand. That, in the end, will result in lower-strength properties of your final product because you don’t have the advantage of longer fibres.”

Once the logs come out of the conditioning ponds, they go through a debarker. Then, the manufacturing process begins. The logs are broken down into strands, and then dried to a low moisture content.

Once the strands are dry, they are classified by size and then blended with wax and a combination of resins, depending on if they are going into the surface or the core of the board, Head says. The strands are then sent to the mill’s forming line.

“All of our board is made up of a series of levels. We don’t simply lay down one layer of strands, we’ll lay down several layers because as the name oriented strand board suggests, we orient the direction of the strand and we’ll offset them by 90 degrees, depending on which layer they’re in, to enhance the overall strength of our process,” Head says.

From there, the mill creates what they call a continuous mat, which is then cut to fit the length of the press. The mats – now known as master panels – are then put into a loading cage, to be put into the press where they are cured. Once cured, they move into an unloading cage while the next load enters the press. Each load is heated for a certain amount of time, depending on the product the mill is producing. Once that is done, the master panels begin their finishing process, starting with sizing the product by width and length.

“From there, we’ll do a number of things – again, depending on which product we are producing – that’s going to add value; some to fit requirements for building codes and things of that nature, and others are value-add for our customers, whether that be adding a tongue and groove, applying a wax-based edge seal to reduce the amount of moisture uptake within the wood fibre, or adding the foil in our Radiant Barrier system for our TechShield,” Head explains.

Finally, the individual boards are stacked into a bundle and packaged, tagged with a bar code, and then inventoried for a period of time before being transported by rail or truck.

Throughout this process, LP Peace Valley makes sure to use as much of the log as possible, using any leftover residuals for heating.

“We consume approximately 99 per cent of the log that comes on site,” Head says. “We have what we call our energy systems, and the residuals heat a thermal oil system. That thermal oil is used to heat up the press, which in turn presses our boards. We also use it in the winter months to heat our building and our conditioning ponds as well.”

This emphasis on sustainability, using as much fibre as possible, is something that Head believes will help address the ongoing labour shortage facing the industry.

“In today’s carbon-conscious environment, LP is making several carbon-neutral and even carbon-negative products. Personally, I find that incredible,” he says. “Younger people looking for a career, so many of them are more aware of the environmental concerns that we have, so we’re a great industry for that. I’m excited for the wood products industry; I think we have an outstanding future.”