The cost of business is going up. Of course, I mean the price of fuel – an integral part of forestry work.  And while this may change some habits, it’s really not possible to change the demands that the industry places on its equipment. The best you can do is get the best truck, at the right price, and have it serve multiple needs. 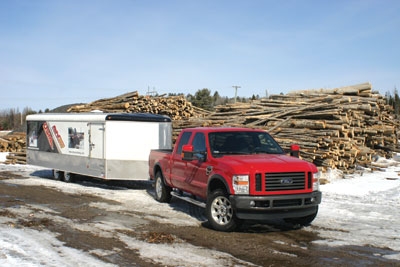 The cost of business is going up. Of course

I was considering this balancing act last spring while hauling an enclosed four-place snowmobile trailer to Sault Ste. Marie, ON, and back (about 1,300 km) with the new 2008 Ford F250 4WD Crew Cab –  $400 bucks in diesel later…ouch! But then that’s the cost of transporting a whole lot more than just you. After all, I was carrying four snowmobiles, four adults, a twin-axle, 25-foot, closed trailer, and all the assorted gear that goes with a week-long wilderness ride. 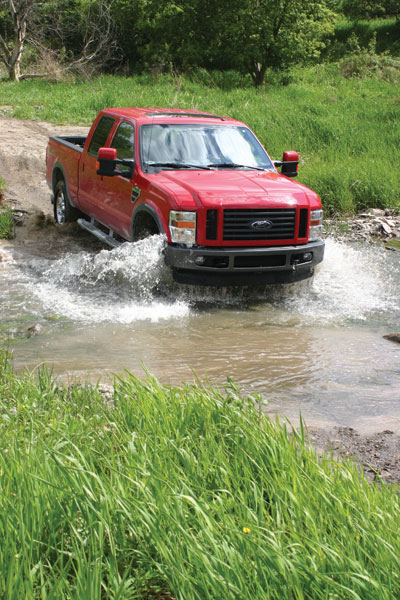 Yes, that was recreation, but work demands are often more extreme. So, weekday or weekend demands power and a truck that can haul comfortably, competently and safely – that’s the first priority. This is a trait Ford has built into its trucks – saying that over 90% of Super Duty owners tow regularly. I went on to tow a 35-foot travel trailer with the same truck, and again found it to handle the load well and with considerable road confidence. On that basis, I’ll say this new F250 works well – towing up to 12,500 lbs conventionally or 16,500 lbs if equipped with a fifth wheel hitch.

All Weather Towing
During that trip to the Sault, the truck also cruised confidently and towed the 9,000 lb trailer with minimal effort – even through a wet, driving snow. Meanwhile, over the 10-hr trip to the Sault, inside, I found the quietest Super Duty yet, a result of better sound deadening material and a new quieter 6.4 L diesel which is also more powerful – putting out 350 hp and 650-ft-lbs of torque. The transmission also gets a new fifth gear that barely taxes the engine at 100 km/h, creating some fuel savings.

Front drivers and passenger seats were plush leather, power adjustable and heated, while in the rear the 60/40 leather bench seat folded up or down and had a recessed armrest. An adjustable gas/brake pedal and tilt wheel accommodated drivers of varying sizes, and a new centre consol offered extra cupholders and an armrest with a cavernous storage space underneath. The rear passengers were surrounded by privacy glass, had plenty of room for elbows and knees, and could even relax with an available DVD entertainment system. Also new this year is a six-CD, AM/FM/SAT Audiophile sound system that now has an MP3 input jack as well.

Precisely because it handles towing so well, over 80% of Super Duty buyers (F250 and up) order the turbo diesel option, at a cost of $8,570.  This combination is a complete generational leap from the old 6L Power Stroke; particularly in its performance and its new emission reduction systems. Those new emission systems are all part of what’s called Ford Clean Diesel Technology, which eliminates up to 97% of the particulate output – a figure on par with gasoline engines – unfortunately these changes have driven the price of the diesel up by about $1,500 (over the previous 6L Power Stroke). Being green isn’t free.

The gasoline alternative to the 6.4L diesel engine is the base 5.4L V8 or the optional 6.8L V10, both of which are proven reliable engines –  and unless you are packing on mega-miles in a year you should consider the lower entry price of  the gas alternatives, even though the consumption will be worse. On the other hand – the diesel equipped truck will fetch more at trade-in time. Incidentally, clean diesel technology was government mandated in ’07, so all manufacturers have had to comply and the resulting rise in the price of diesel engines has affected them all.

One benefit that stood out on my trip up north was the reworked high-pressure common rail fuel injection on the 6.4 L, which has improved cold weather starting – at least down to minus 20 C we found. No warm-up time needed, and no smoke.

Ford’s TowCommand System returns as an option – one that is well worth the money. It includes a factory-installed electronic brake controller that now works with the anti-lock braking system (when it detects poor traction), and helps to slow the trailer and truck in those conditions. And I can tell you that this integrated controller works better and quicker than any aftermarket add-on unit I’ve used. For this reason alone I’m happy to say that while Ford was the first to install its own unit in its trucks, GM and Dodge have followed suit on its HD trucks. Next year though you’ll be able to order these factory-installed controllers even on half-ton trucks.

The TorqShift five-speed automatic transmission also has Tow/Haul mode for heavy loads, but frankly the low-end torque on this engine pulls even the largest trailer smartly off the line without using it. Also of note is the available PTO feature and dash-installed extra power switches for any number of custom applications and/or ready for upfitters equipment installations. Twin alternators in the Super Duty supply enough power for multiple uses, including hydraulic add-ons.

A wonderful feature is the PowerScope trailer tow mirrors. These large, heated mirrors slide out at the push of a button, affording a clear view down the sides of a towed trailer. Drop the trailer, push the button and the mirrors slide back in. They also “break-away” in both directions and have large adjustable convex spot-mirrors.

Out back, Ford’s hide-away tailgate step is a good example of a company doing its homework and giving truck people what they need. It makes getting up and down from the bed easy – no more bruised shins. 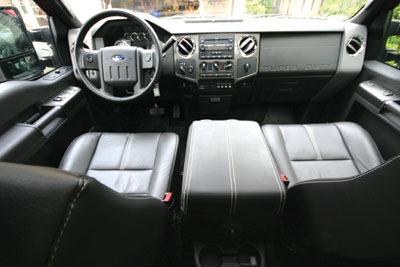 But having said that, sometimes unexpected problems do surface. During that last snow storm of the season, just south of Sudbury, a warning light came on – “check air filter” it said. I did, only to find that it was packed with snow. I scooped it out – before day’s end I’d have to do it once more. Interestingly the owner’s manual mentioned that driving snow or rain might clog the intake to the filter – and it suggested a remedy – dry it out.  Say what?

I called Ford when I got back, and found they were aware of the flaw and were offering a winter front cover as a remedy to any customer who experienced this problem. And this is the paradox for all manufacturers really – something innovative like the tailgate step is loved by everyone. Then despite tens of thousands of test miles on the new engine (where this problem never presented itself), they end up with plugged air filters.

The new Ford SuperDuty is a handsome truck, even when it’s all muddy. Mine was dressed in red with a blackout grille, chrome step rail and eight-spoke 20” rims (upgraded from 18”) – it looks tough, capable and ready to haul.

Howard Elmer is a specialized truck and ATV specialist based in rural Ontario. He tested and wrote this review for Canadian Forest Industries Magazine.