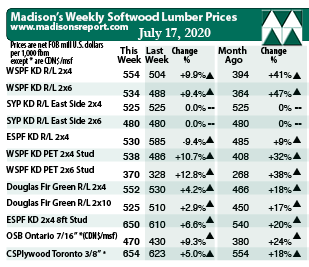 The fact was that end-users needed wood, so producers and secondary suppliers alike could only pick through their weak inventories to find the necessary stock. Sawmills were already booked with production orders well into August thus continuing to rise prices was the only option.

“It was a runaway market again last week as prices soared thanks to persistently limited supply.” — Madison’s Lumber Reporter

Western S-P-F purveyors in the United States described another crazy week on their side of the border. Producers continued to struggle to keep up with relentless demand as they raised asking prices ever higher as wholesalers and distributors couldn’t fill the gap with their depleted inventories, and buyers clamoured for any stick of wood they could find regardless of cost.

Primary and secondary suppliers of Western S-P-F commodities in Canada had very tight inventories while demand only seemed to be intensifying with each passing week. Sawmill order files were into mid- to late-August, and worsening rail car supply has put mills up to three weeks late on orders already made. Producers continued to sell out before 8:00am every day, ending up with little or no items on offer for ravenous US customers. Standard Grade #2&Btr and Appearance Grade High Line dimension soared in price again, rising between $40 and $56 with zero push-back from frantic buyers. 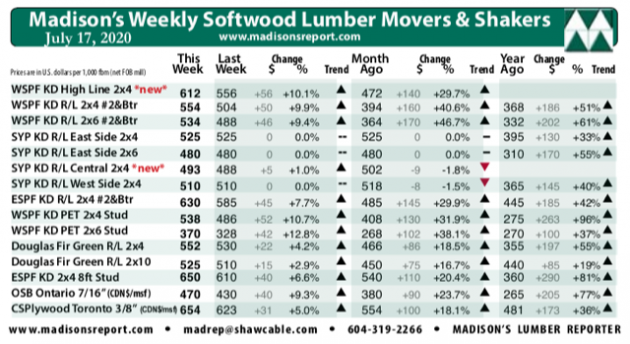 “ Sawmill order files were pushed into the latter half of August and customers were so desperate they were actually buying that far out.” — Madison’s Lumber Reporter

Eastern S-P-F dealers were angered by sales taking place as high as $150 over print. Frustration was present through the supply chain as folks scrambled to cover jobs but just couldn’t find the wood. Prices were considerably higher again last week, with reload and distribution levels higher than sawmills. Producers in the US were able to deliver product in roughly two weeks, taking advantage of the fact that Quebec mills were entering their two-week summer vacation period.