Feb. 13, 2017 - “It’s a different mentality to harvest trees in partial sections,” says Raymond Frappier, a forest contractor in Estrie, Que. “I find it beautiful and it allows us to return to the same area after 15 or 20 years.” 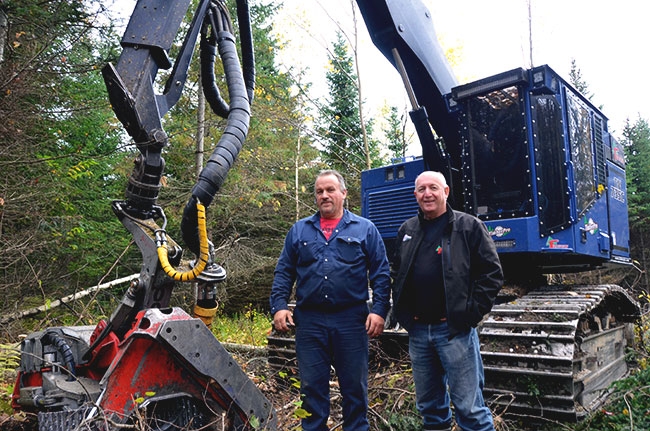 Harvesting one tree out of three is the norm in southern Quebec to maintain forest landscapes on private property and allow for more frequent harvesting of trees. Like most operators, Frappier works for different forestry companies that manage privately owned lots.

“Each group has its own work teams and they make exchanges according to local needs,” he says.

Frappier’s team is one of two working for the Windsor group; he also carries out contracts for the Coaticook group, where his and five other teams harvest timber. Frappier also moves sometimes into the Lavaltrie sector, allowing the team to log 10 months a year.

These are the forest groups working to find contracts with private woodlot owners to obtain permits for harvesting, says Daniel Rousseau, manager of customer service for the Groupement forestier St. Francis, based in Windsor, Que.

“We then do inventories and prescriptions, then we send one of our two work teams for the harvest,” he says.

“When we arrive on site, the trees are marked and water features are flagged,” says Frappier. Depending on the quality, the wood is then distributed to various buyers in the territory. For example, pulpwood is destined for Domtar’s Windsor, Que., mill, while some of the softwood goes to the Clermond Hamel sawmill.

The forestry group, which harvests 40,000 cubic metres per year, is also responsible for FSC certification – a standard that comforts some owners and allows the group to get $15 more per haul. One of the group’s biggest customers, Domtar, requires the FSC certification, notes Rousseau.

Operators must provide log lengths of eight, 10, 12 or 16 feet, depending on the agreements in place and various mill specifications.

The hardwood harvest can yield up to 25 and 30 dollars per cubic metre. To ensure a certain level of quality, the skid trails should not exceed 12 feet, says Frappier.

To help ensure this, Frappier decided to purchase one of the most compact machines on the market, the harvester TimberPro TN 735C, equipped with a cab with a width of nine feet seven inches.“If your cab is wide, you hurt the trees and you damage your cabin when the time comes to make the selection. With a smaller cab, it hardly hangs,” he explains.

To be more effective and reach the most distant trees without having to move out of the logging trail, Frappier has requested a longer telescopic boom, from 32 to 34 feet. “TimberPro was able to extend my boom while other companies did not want to,” he says.

Machinery Tanguay manufactured the 34-foot telescopic boom, before returning it to TimberPro for installation, explains Daniel Chastenais, vice-president of sales for Machinery Tanguay, who distributes TimberPro machines. The advantage of the enhanced telescopic boom is that is allows Frappier to remain in the tight trails to harvest the trees, which saves time and improves production.

“There is a lot of potential for this type of machine in southern Quebec, but also in the north, where we find more and more select cuts,” Chastenais says.

TimberPro also has a larger harvester, which would be better suited to the conditions of northern Quebec.

Enhanced software
To improve the performance of its operations, Frappier also bought a Log Max 6000B harvester head two years ago. “There is often up to 75 per cent hardwood and it’s a great head for it,” says Frappier.

Last summer, he invested $30,000 in the new Log Mate 500 computer, which increased the head’s performance by at least 15 per cent.“It responds faster and the lengths are more accurate,” Frappier says. “It’s a pleasure working with high-performance equipment.”

“With this software, the head can now proceed at 220 rpm, 40 more than before,” adds David Didier, Log Max’s representative for Quebec. “The computer also runs much better braking, allowing more accurate measurements.”

The system is so efficient that Log Max has sold over 25 harvester heads in the last two years in Quebec.

Investment
In total, Frappier has invested nearly $625,000 in its operations over the past two years – $450,000 for the harvester and $175,000 for the head. “I realize that it is more profitable to work with the latest machinery,” Frappier says. With these investments, he can harvest about 100 cubic metres per day, for a total of 500 to 700 cubic metres per week. With an average of $25 to $30 per cubic metre, Frappier is able to properly monetize his investments.

By sector and harvested species, operators can make up to 10 sorts for softwood and hardwood products.

“It slows production, but it gives us a better price for the quality,” Frappier says. “If you send more quality fibre to the mill, then the owner also earns more money.”

Landowners being satisfied with their woodlot quality can translate into recommendations to their neighbours, who will then want to work with the forestry group, a win-win scenario.

Loggers do not need to travel hundreds of kilometres to harvest timber in the Eastern Townships, because there is enough business nearby. Timber transportation is also easy because the wood processing plants are rarely more than 100 kilometres away from the logging sites.

To avoid disturbing residents at night, the harvesting operations are almost always during the day; a factor that Frappier, who usually works within 50 kilometres of his house, greatly appreciates.