Nov. 25, 2016 - Randy Janzen wanted to become a logger ever since he was a teenager. Growing up in the northern B.C. Interior in Fort St. James, he still remembers watching all the successful logging contractors driving around town in brand-new pickups when he was a kid, and thinking that was the life for him. 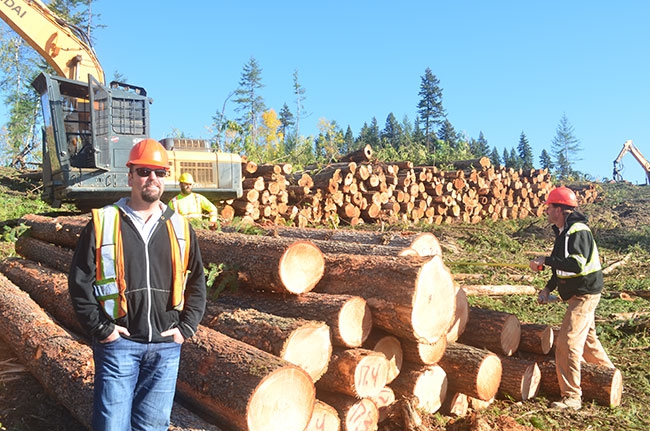 Fuelled by the combination of his curiosity of the industry and a dislike for traditional schooling, Janzen started working in the industry at 15 years of age, and caught the “forestry bug” immediately. That was 31 years ago, and Randy has never stopped enjoying what he does.

“Once you get in, that’s it,” Randy says during a tour of his harvesting operation just off of Highway 24 in the Little Fort, B.C., area, about 100 kilometres north of Kamloops.

Randy found he had a passion for the processing side of the business, and started up Janzen Logging, which is currently based in Chase, B.C. His company sub-contracts for Peak Forestry and employs five people. He mainly harvests in the Thompson-Okanagan Region, between 100 Mile House and Barriere. The company has an average annual harvest of 200,000 cubic metres; mainly comprised of Douglas fir, spruce, pine, balsam and cedar. The peelers he harvests go to West Fraser’s Williams Lake plywood plant, while the pulp logs go to Rivercity Fibre in Kamloops. The sawlogs go to West Fraser’s sawmills in Chasm and 100 Mile House.

To ensure he continues to meet the specifications, standards and production targets set out by the various mills he supplies, Randy decided it was time for his operation to receive an equipment upgrade. For the upgrade he reached out to Woodland Equipment and purchased two new Hyundai 2200s equipped with Waratah HTH622C processing heads.

“The Waratah heads do 42” to 4” trees for me. Those heads are really versatile. They’re a really excellent, all-around head,” Randy says.

In addition to his new equipment, Randy also operates a Hyundai 210 equipped with a Waratah HTH622B processing head.

Randy says that the service he has received from Woodland Equipment over the years has been a vital part of ensuring the success of his operation.

“They’re my lifeline,” he says. “They’re part of the reason I’m still in business. They offer exceptional service. You phone them one hour and they’re here the next, which equates to almost no downtime.”

Future challenges
When it comes to challenges Janzen Logging faces on a daily basis, the big ones for him are meeting the changing targets put forth by the various mills, rising equipment and operating costs and lower logging rates.

He has also noticed the challenges that steeper slopes are presenting to logging operations in the area, although he says his processing operation has not yet been seriously impacted.

“The ground is getting more challenging, 40- and 45-degree slopes,” he says. “It’s not so bad for the processors, but the rest of the operation seems to struggle a little.”

Chill out
Randy says that there is no room for hot tempers in his crew, and that it’s vital that his team follow a particular philosophy when out in the bush with him.

“Everyone in every part of my operation has to be chill,” he says. “We still get the odd hot-headed young guys coming in, but they don’t last.”

Randy says the ones that do last are the backbone of his operation’s success, and that he’s very fortunate to have them in his crew.

“I feel they are like family, I’d do anything for any one of them,” he says. “They are the most important part of my business. What’s the old adage? You have to give to receive. Well I give a lot and get twice as much in return from my guys. They all give me 110 per cent every single day. I’m truly grateful for each and every one of them. My wife and I believe in a good quality of life, a work-leisure balance. My guys work a four-on, four-off shift and they all love it and are coming to work happy.”

Although Randy has been approached with opportunities to expand his business from strictly processing to a full logging contractor operation, he says he enjoys processing and isn’t interested in that type of expansion.

“I’ve been approached to do those things, but I don’t want to work any harder than I already am,” he says. “I’ve got a great relationship with the guys at Peak Forestry. They’ve treated us really well, so I’m happy to have all my focus go into processing. It’s year-round work and it’s steady.”