Truckers like to gripe about fuel prices – and lately, they have every right to do so. The cost of diesel has reached unprecedented heights, and there’s absolutely nothing log or chip haulers can do about it. While truckers and trucking companies can’t control the price of fuel, they can control how much they use. This can be accomplished by spec’ing for fuel economy, eliminating unnecessary idling and adopting proven fuel-saving devices. Each of those tactics has been covered in this space before. 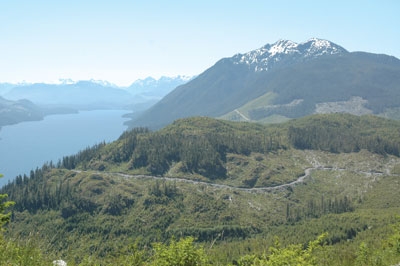 Truckers like to gripe about fuel prices – and lately

Beyond that, the rest of the cost of rising fuel prices has to be passed on to the shipper – or the mill. From there, it’s up to the mill to pass the cost further on down the chain, ultimately with the consumer footing the bill.

With profit margins razor-thin all the way down the supply chain, it’s the only option. And it’s happening elsewhere as well. All you have to do is watch the prices at the local supermarket, or even coffee shop. Signs are popping up everywhere that prices are being increased due to rising transpor-tation-related costs.

In the forestry sector, owner/operators and log hauling companies that don’t understand their true operating costs are destined for failure during these challenging times. Mills that don’t take the time to understand the challenges faced by their hauling contractors and offer to pay a fair fuel surcharge to compensate for rising fuel costs are likely to contribute to their demise. Nobody benefits from that.

It’s encouraging to see the forestry industry is seeking creative ways to recover the high cost of fuel. Tembec made headlines this summer when it announced it was slapping fuel surcharges onto the costs of its finished products. This flies in the face of the traditional strategy of simply increasing sticker prices.

By labeling the price increase as a ‘fuel surcharge’, Tembec allows itself to continuously adjust the price based on energy and raw material prices. Smart maneuvering on one hand, because it lets its customers know exactly why costs are increasing – surely anyone who’s filled up their gas tank recently can empathize!

On the other hand, it implies a temporary price increase and is subject to future pricing volatility. Customers really don’t like uncertainty.

Buyers’ Market?
Nonetheless, it’s encouraging to see some creative solutions from manufacturers. Taking a broader look at the trucking industry as a whole, the picture is currently quite bleak. Studies by Transportation Media Group have shown that shippers are taking advantage of a slowdown in the trucking industry to put pressure on rates and refuse rate increases and fuel surcharges.

In 2004, when capacity was tight, 80% of shippers reported agreeing to rate increases of more than 4%. By contrast, last year only one-third of shippers were conceding to rate increases. The slowing economy, the rising value of the Canadian dollar and the bankruptcies and downsizing resulting from both those factors, have trimmed the capacity from the trucking industry. The pendulum has now swung back in the shipper’s favour.

To make matters worse, many owner/operators and trucking companies are diving into new niches in a desperate attempt to survive. Often when doing so, they offer cut-throat rates, as they are not familiar with their true operating costs in that new segment.

Fortunately, log haulers are somewhat protected from this. For one, a truck spec’d for highway haulage will not survive long under the rigors of logging. Secondly, drivers who don’t have a background in off-highway trucking will also not likely last long.

With all this said, the future remains grim for truckers who cannot negotiate a fair rate and fuel surcharge formula with their shippers or mills. To make matters worse, the federal Liberal party is proposing a carbon tax on diesel fuel. And the provincial government in BC has already done so. BC’s carbon tax – purported as being “revenue-neutral” – will add $1,000 to the operating cost of an owner/operator this year, escalating to a $6,000 increase in 2010, according to BC Trucking Association figures.

“In a revenue-neutral situation, either everyone comes out even or some people receive more than they pay,” assessed BCTA president Paul Landry. “The government has chosen an impossible third definition: everyone gets more than they pay. But families in the trucking industry will be net payers by a substantial margin. Because diesel fuel comprises the largest portion of operating costs, the trucking industry –
responsible for transporting everyday necessities for consumers, manufacturers, exporters and importers – will be paying an excessive portion of the tax.”

Under the federal Liberals
Green Shift Plan carbon tax scheme, truckers will once again shoulder an unfair burden of the load. “Truckers will likely have a very different view of what tax revenue-neutrality means compared to what is espoused in the Green Shift Plan,” Canadian Trucking Alliance chief David Bradley recently wrote. “There is no tax neutrality for truckers in this plan, which clearly states that at the end of the fourth year ‘The average freight trucker’s total annual operating expenses (will be increased by) approximately $1,700 per year’.”

Modest business and personal income tax refunds will not be enough to offset the increased costs endured by truckers, who have no choice but to consume diesel as a way of life.

New Trucks
On a semi-related note, fuel prices have also created a dramatic change in the heavy-duty engine landscape for 2010. Previously in this space, I wrote about Caterpillar’s withdrawal from the North American on-road engine market. I also wrote about how each of the remaining engine manufacturers plan to comply with the Environmental Protection Agency’s 2010 emissions standards.

To recap: Volvo Group (including Mack), Daimler Trucks North America (including Detroit Diesel) and Paccar were planning on adopting urea-based Selective Catalytic Reduction (SCR), which involves NOx after treatment. On the other hand, Cummins and Navistar planned on meeting 2010 standards by using an in-cylinder solution involving higher levels of exhaust gas recirculation (EGR) – the technology already in use today.

Well, Cummins dropped a bombshell in mid-October, announcing it was changing paths mid-flight and adopting SCR on its heavy-duty product line. The reason for the change of heart: record fuel prices.

Cummins reps said in a conference call with media that the high cost of diesel has changed the value proposition for engines in 2010, as has the development of a new catalyst material that will allow SCR to deliver fuel economy gains of up to 5% versus Cummins’ original strategy.

It may seem like a major about-face for Cummins – and it is – but it’s not as though the company must start from scratch this late in the game. It has already been developing an SCR solution for its mid-range products, and it also has some 200,000 engines in use worldwide that use SCR.

The question remains, will truck owners still have a non-SCR alternative in 2010? Given the amount of trash talk Navistar execs have dished towards SCR, it’s unlikely they will change course anytime soon.

And it’s worth noting, in the conference call with media, Cummins vice-president of heavy-duty engineering Steve Charlton insisted it was not technical issues that halted development of its EGR solution.

Those words are no doubt encouraging to those truckers who desire a non-SCR solution, a camp that may well include loggers who often operate off-highway where fuel economy isn’t a primary concern, and remotely where access to urea may be an issue. However, their non-SCR engine choices for 2010 just got a whole lot smaller. And you can blame the price at the pumps for that one too.