December 15, 2015 - In 2011, Resolute Forest Products (RFP) recognized that the tides were turning favourably, so it was time to invest. Emerging from the devastating recession, RFP saw signs that the industry was in full recovery mode thanks to a significant uptick in the U.S. housing market. 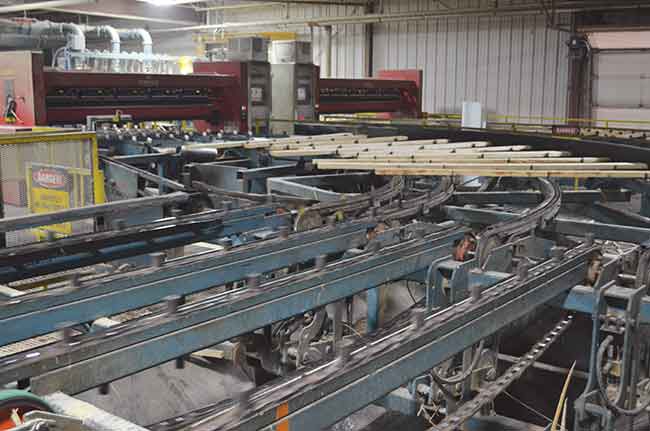 At the time, the company’s flagship northwestern Ontario sawmill, located in Thunder Bay, was producing approximately 200 to 220mmbft thanks to an intake of around one million cubic metres of logs. However, company officials recognized that the mill had the potential for even greater production, with the potential of increasing its current throughput by around 20 per cent.

“The fibre supply is there,” says Maxime Langlais, general manager of RFP’s Thunder Bay sawmill and pellet plant. “The mill is able to reach 300 million board feet with some modifications and upgrades and we were expecting the market to come back.”

So in May of 2011, the company began an $8-million expansion project that would increase production by 50mmbft per year and, at the same time, help solidify the forest industry in the region.

The starting point
Located on Fort William First Nations land on the southern outskirts of Thunder Bay, the former Bowater sawmill was originally built in 2003. The mill produced 2x3s, 2x4s and 2x6s and six- to 10-foot lengths, with 2x4s being the largest volume of lumber produced by the mill.

The mill primarily supplies lumber for the U.S. housing market, taking approximately 80 per cent of the mill’s lumber volumes. The other 20 per cent is sold into the Ontario housing market, especially around the Greater Toronto Area, as well as some volume flowing into Quebec.

The wood mix from the woods within a 250-km radius of the mill is approximately 65 per cent Jack pine, with the other 35 per cent a mix of black and white spruce. The mill keeps a six-to-eight day supply of logs on the mill site, allowing the mill to always be cutting fresh logs to produce high-quality lumber. That supply is sustainable thanks to the reliability of the logging contractors, who consistently provide stems; even in adverse weather conditions.

It is that same wood supply that is the reason why the company was able to make upgrades to the mill that will increase its production by 20 per cent. RFP recognized that there was a greater volume of wood available from the forest than was currently being used by the mill, and that contractors in the region were available to cut the extra volume. The bold move to increase production as the region was crawling out of the recession benefited the bottom line of RFP and many logging contractors throughout northwestern Ontario.

Inside the mill
When Bowater management built the original mill that opened in 2003, they sought a turnkey solution that could provide most of the sawline elements at once, rather than have multiple manufacturers and multiple contractors shipping and installing equipment throughout the length of the construction.

Such a project was a good fit for Comact, who already had previous experience working with Bowater on a similar type of project in the same region (Ear Falls). Ultimately, Comact was successful in securing the contract for the new Thunder Bay mill.

The 2003 installation included four Valon Kone Kodiak debarkers, and a fifth was added during the 2011 upgrade. Those debarkers feed three sawlines, including two DDM6 which are “optimized small log processors that can chip, profile and saw boards so that the products coming out from the machines are finished,” according to information provided by Éric Michaud, senior vice-president of business development at Comact.

Michaud continues, “the third sawline is a complete breakdown line including an optimized canter quad breakdown with a six-inch curve sawing wiggle box which was replaced in 2011 by a curve sawing TBL3 in order to increase throughput of the mill.”

The TBL3 provides a much-needed solution for the mill, which was experiencing maximum capacity with the wiggle box. The optimized sawing, chipping and profiling unit minimizes cant spacing, eliminates the need for returns to the edger, operates at speeds of up to 550ft./min. with three-inch spacing possible and offers controlled curved sawing, straight sawing and S-shape sawing.

The two trimmer lines and lumber sorter take wood from all three sawlines, with 41 bins for sorting the varying lengths of lumber for the U.S. and Canadian markets. Comact also provided a pair of bundle makers for each sorter, which produces 8×8 lumber packages for kiln drying.

Although the planer mill does not contain a machine supplied by Comact (RFP is using a Gilbertech instead), the planer mill at Thunder Bay has been integral for Comact over the past decade. The planer mill was the site of the first installation of the Comact GradExpert optimization system, which has helped the company carve out a strong marketshare for automatic grading machines. With the GradExpert technology in place, the planer mill can process up to 230 boards per minute.

The last piece that was added to allow Resolute to increase production was an extra dry kiln, the fifth used by the mill. The new kiln is a Salton Double track kiln, basically identical to the original four kilns heated by a 60-million BTU energy system with a Lamont-style heater. The kiln provides the necessary capacity to keep lumber dried at its current rate of productivity, matching the current output and providing uniform quality throughout the entire production run.

Challenges ahead?
The increase in lumber production resulted in a need to solidify the logistics systems in place for moving lumber from mill to market. The lumber destined for the U.S. market is transported by rail, which has, at times, been a challenge for the mill. In the winter of 2013-14, the mill experienced a shortage of rail cars during the extreme cold that settled into the region for several months. The mill had to curtail one shift for four to five months to compensate for the production reduction that happened as a result.  Although the shortage in rail cars that occurred during the extreme weather is not expected to be a common occurrence, additional trucks are now available to reach domestic markets. Although trucking shipments comes at a higher cost than rail, the option is there should a similar weather issue ever arise.

RFP is in a unique situation. The sawmill is located in the same city as Lakehead University and Confederation College, both of which have the ability to offer the mill educated young people equipped with some of the skill sets required by the industry. But challenges still remain, as certain types of skilled labourers become increasingly hard to come by.

“For the trades, it is tougher to find certified millwrights and certified electricians,” Langlais says. “But for production, we are able to find the people we need.”

But the bigger challenge right now is what is happening with markets overseas, which is already making lumber markets difficult in Canada.

“It’s really tough with the Chinese economy problems,” Langlais says. “The housing starts in the U.S. are still good, but there is a lot of wood on the market.”

For a mill, region and country where forestry fortunes are on the upswing, issues like the slowing of the Chinese economy can have a negative impact on the sale price of lumber both to domestic and international markets.

As Canada continues to diversify its lumber market, RFP’s Thunder Bay sawmill will continue to push to provide even more lumber to retailers throughout Canada and the U.S.

Pushing pellets
When Ontario Power Generation announced in 2010 that it would convert its Atikokan, Ont. generating station from coal to biomass fuel, RFP saw an opportunity. The company saw a way to generate a new revenue stream with the production of pellets using chips and sawdust from its sawline.

In November of 2012, RFP was awarded half of the total supply contract for the OPG Atikokan project, totalling 45,000 tonnes annually of white pellets. Within 24 hours, RFP announced its plans to construct a pellet plant within the current footprint of the Thunder Bay sawmill.

The company worked within a small footprint for the pellet mill, knowing that magnetics and destoning equipment would not be necessary. The result was a small mill profile created in conjunction with Andritz and Law Marot MillPro (LMM).  Andritz supplied a hammer mill for reducing shavings, two 1260 feed screws, two 18×56 conditioners, and two 26LM pellet machines. LMM were responsible for supplying the shavings screener, cooler and pellet screener to round out the project.

The overall investment in the mill was $10 million, and the mill was completed in the third quarter of 2014. The plant has continued to ramp up production over the past year in order to hit the target volumes needed to fulfill the contract with OPG.

The result is a secondary revenue stream for RFP that does not use any imported fibre.