Sustainability is a word that is tossed around today, but in the BC Kootenays, the man who knows the definition both from the environmental and business side of logging is Ivar Larson, a former BC Wildlife Federation president and third generation logger. As contractors look for safe passage through the US housing bite, it’s become all about sustainability now, he says, not profitability. Staying in the game is the game. In the Kootenays, where environmental concerns include naturalists, hunters, wildlife enthusiasts, tourism, ranchers, and protected species, the game is especially tough for logging contractors. 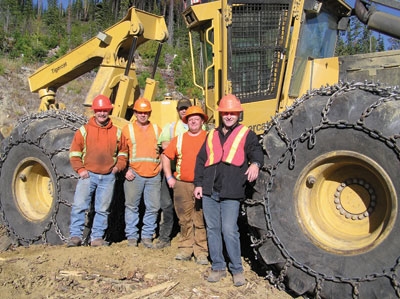 “Productivity today is tight to the line. With the rates being paid today, you have to be better, faster and generally more efficient,” says Larson, who runs Carl Larson Logging Ltd. in Cranbrook with brother and partner Lance. Both brothers are hands-on loggers. Ivar lays out the block, runs equipment, and uses his expertise with wildlife to determine what shelter or special interests may exist in areas. It’s taken time to prove out his knowledge, but wildlife officers and foresters now trust and respect Ivar’s inter-generation knowledge of the forests and his ability to ensure that his logging accommodates area creatures.

Brother Lance runs the Tigercat 830 feller buncher with a skill that often amazes forest and company officials, as he is able to leave or work around shelter areas or access timber in difficult terrain. “They often wonder how he’s able to get certain trees,” says Ivar.

Bug Battle
On a crisp and clear autumn day, the Larson brothers are working 40 minutes out of Cranbrook on a watershed area. They are doing preventative treatment so that mountain pine beetle infested pine doesn’t become tinder dry fodder awaiting a lighting strike to torch a summer fire into the Kimberley ski hill only a few ridges away. The pine is still in the green stage, some dead interspersed, but as Ivar points out, the trunks are riddled with buckshot holes, the bug’s lethal calling card.

The trick on the mixed stand block is to make the skidding work. The Larsons are running a regular Tigercat 630C and a newer Tigercat E620C, which is a powerhouse on the slopes as it packs more horsepower on a lighter and longer frame. Ivar has tried to lay out the skid trails so that he’s not skidding more than 700 metres. He’s looked at FERIC studies and determined on older skidder models that 500 metres is a threshold in the area, while with the newer equipment he can go out further. But, he’s still cautious about the number of skid trails he places in a block as “I’ll reclaim the skid trails afterwards,” he says.

That’s why he chosen to use the lighter Tigercat E620C – it’s got the ability to move quicker over longer hauls and yet pack a payload that can keep the processor busy. With 35×35 tires, a slightly longer frame (thus the E designation for elongated) combined with an arch which hoists the load central to the machine, the skidder has enhanced stability to chase the wood on the slope. The larger tires, with chains used on the slope, also allow the machine to move over stumps, produce less ground disturbance, and, in soggy areas provide better flotation. The tires are also expected to do double duty when the snow moves in. The ability to raise the arch over the centre of the machine also ensures that there is no rutting when skidding logs, as the plumed-top logs simply brush the ground after the machine.

The area the 630C and E620C are working is sloped, like most drainages, but typical of the steeper terrain are burrows, pockets, and dips. E620C operator Jory Langridge says he stays within the WorkSafeBC guidelines of 35% grade, but when there have been occasions where the machine has had to go into a steeper area to get a stem, there have been no stability problems with the machine. It hugs and climbs.

Speedy Skids
But, it’s the machine’s zip Langridge likes best. Its hydrostatic drive rather than a regular transmission gives a punch of power when needed. Reaction is immediately. ”It’s got a lot more pep,” he says. The 610, 620 and E620 series offer a high-performance hydrostatic drive system with infinitely variable gear ratio and no gear shifting. (Hydrostatic drive systems use fluid pressure system to transmit engine power to the drive wheels or tracks.)

The 630C has an enhanced system but it’s not as quick as the E620C, partially because of top travelling speed and increased weight. That zip is evident as Langridge moves the machine even around the landing. “It’s fast enough on the turns,” says Larson, “That can help the processor.” That’s a big change from an old, slower skidder that Larson was using. “The old skidder wasn’t packing enough wood to keep the processor busy,” he says.

The Tigercat E620C operator drops a turn, blades debris or repositions logs and then zips around to pick up a stack of proceeded logs that operator David Deveau, running the Linkbelt 240 with a Waratah 622B head, has spooled through. Langridge’s grapple pinches up logs and the machine runs them to piles down the hill and returns. 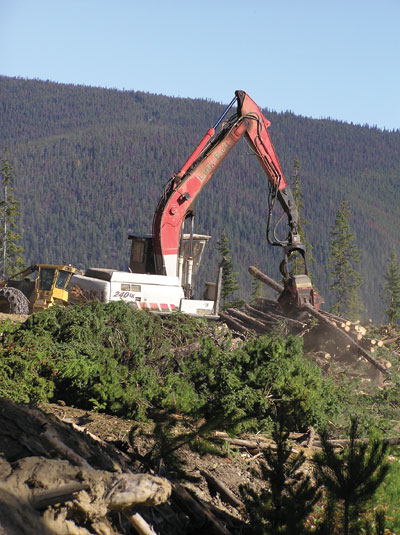 On turns in the bush, Langridge is noticeably faster hands down than the other skidder. In a race of a solid line, Langridge estimates that within seconds, he would be two machine lengths ahead of the other skidder. In general, he think he’s about one or two minutes faster on a turn than the regular 630C working the cut-block. And, the 630C operator is no slouch. Jim Lowe has run skidder for 25 years and is squeezing the best productivity out of the heavier machine. Lowe knows a few tricks to get the best cycle time on the turns, everyone at the site agrees. But, even that expertise can’t beat the E620C, which can move at up to 14 mph. That compares to the 630C’s top speed of 11 mph. Speed is generated by the higher horsepower engines in the 620s, with the E620C outpacing even the 630C. Tigercat figures for horsepower are: 610C (190 hp), 620C (220 hp) and E620C (260 hp) while the TC 630C rates at 250 hp. All hp are at 2,200 rpm.

“Everything,” is what Lowe likes when rating the E620C skidder against the other makes and models he has operated over the years. Lowe likes the agility, responsiveness, and the foot controls are “angled to the right” and the seat swivels 40 degrees, which makes it easier on the operator’s neck and back as he looks back to pick up a load.

Langridge also likes the cab set-up. A chronic ailment of skidder operators is lower back problems, but with the air-ride seat and foot controls angled, there is less opportunity of operator fatigue in the short term, or, chronic back pain in the long term. The cab also offers good visibility, air conditioning, heater, and legroom. The lights are a hit with the operators.

“They are really good,” says Langridge. “It’s got the best set up of lights.” The new lighting system on the machine is capable of lighting up the whole landing and that kind of candle power makes chasing logs during the dark winter mornings and evenings easier. Langridge chuckles that the lights are so good that some operators have scrutinized them to see if they come off easily.

Other E620C skidder operating features also appeal to the crew. Langridge likes the hose and water located in the skidder’s blade. The weight of the water in the blade (which acts as a holding tank) also lends to the stability of the machine when pulling a load. Like most summer shows, there is always the threat of fire started by machinery, albeit a spark thrown by metal equipment scouring a rock. The ability of the skidder to zip in and uncoil a water hose to douse small fires is a plus.
Working in dead material or with dying wood can bring down showers of fine needles and debris onto the machine, causing problems. The “purge fan”, says Larson who brought the skidder in June, has the ability to blow all debris from the radiator. Especially in hot weather, this ensures that the skidder is running cooler and is a lot more fuel-efficient.

Fuel costs are a major consideration for Larson and a reason he likes the IQAN systems onboard the TC E620C. Parker Pacific salesman Steve Carter – a former equipment operator – says that IQAN is a management system that monitors the operator’s actions and has programmed parameters for each function, which provides for proper machine operation. This also translates into better fuel economy.

“It’s hard right now,” acknowledges Larson, “You have fuel costs rising, equipment costs, and oil costs and in today’s business, everything is on the line.” But, by bringing in the E620C on board, Larson is hoping that the skidder will be part of a lifeline strategy that hauls his crew and company into a better US economy.