Aug. 16, 2016 - It’s hard to find good help. This is a comment echoed in almost every industry by almost every manager at one time or another. The logging industry is far from an exception. 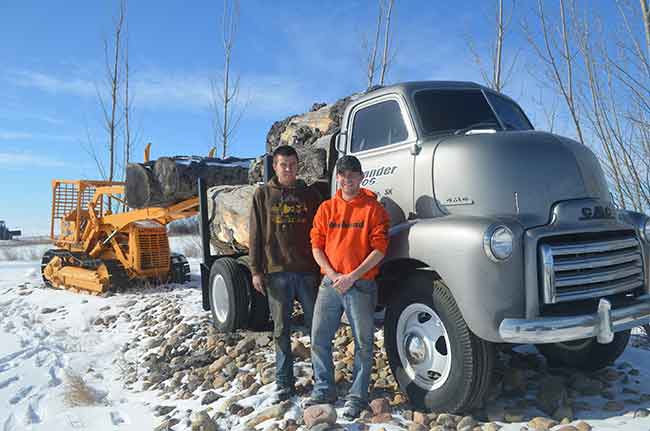 It’s hard to find good help. This is a comment echoed in almost every industry by almost every manager at one time or another. The logging industry is far from an exception.

Employee retention in Canada’s logging industry is a challenge for most organizations, large and small. This can be especially challenging for contractors operating in remote areas in northern communities.

But in the 5,000-person town of Meadow Lake, Sask., about 300 kilometres northwest of Saskatoon, operates Brander Bros., a successful logging and hauling operation that provides employment for more than 90 people in the area.

Canadian Forest Industries travelled to Meadow Lake to check out Brander Bros. logging operation firsthand, and find out how they are able to retain such a large number of employees in a remote area of the country.

What’s their secret? They put their people first.

“We have a lot of key people here,” says Kris Brander, who runs Brander Bros. along with his brother Jamie and his father Allen. “We try and keep them happy.”

The company has workers that have travelled from as far east as Atlantic Canada to find work. Keeping them comfortable and offering competitive rates are vital aspects of retaining the services of the company’s best employees. Some of the employees also joined up with Brander Bros. during the downturn in the oil industry in northern Alberta and northern Saskatchewan. The key to keeping those employees when the oil industry recovers will be operating a positive work environment.

The sites where Brander Bros. perform their harvesting operations are typically between 50 and 150 kilometres away from Meadow Lake, and employees out in the bush are usually on site for two weeks at a time. To make their downtime as comfortable as possible, Brander Bros. custom-builds remote housing out of its 14-door machine shop for all of its workers.

Each remote housing unit consists of a 12’ x 40’ unit that is divided in half to create two 12’ x 20’ living quarters, one for each employee. Each living space is completely separate from their neighbours and is equipped with a small kitchen, bathroom, bedroom and even satellite television.

“When you’ve spent 10 or 12 hours a day working with people you want to have your own space at the end of the day,” Kris explains.

The majority of the employees appreciate the efforts taken by Brander Bros. to keep them comfortable in the bush and this perk has aided in attracting and retaining the most skilled and experienced loggers in the area.

But keeping their workers comfortable doesn’t end in the bush.

Brander Bros. also built a hotel on the same property as its head office for its staff, offering the added convenience of being able to roll out of bed and start one’s day immediately.

The beginning
Kris and his brother Jamie were introduced to the forestry industry at a young age. Their father, Allen, was the general manager of NorSask Forest Products in Meadow Lake for 40 years and was a part owner in the company.

“My dad was my main influence for getting into forestry,” Kris says during our drive out to one of Brander Bros.’ logging operations in the Morris Creek area about 55 kilometres from Meadow Lake.

Of course, his father wasn’t the first Brander to work in the forestry and transport sectors. In the 1970s, Allen’s father used to feed his own sawmill that was set up in the bush 20 miles south of town using a Caterpillar machine that now sits at the front entrance to Brander Bros.’ head office.

“My grandpa owned a transport company and freighted the radar line up north after the Second World War,” Kris says.

After Tolko opened up its oriented strand board (OSB) plant in town in 2003, both brothers went to work there and worked as operators in the wood room, often during the same shift.

“When the mill started up, we had a couple of trucks and were the first load and haul contractor delivering wood to the OSB plant,” Kris says.

Brander Bros. hauled logs for logging contractors while working at the plant for two years, before leaving the plant to focus on their log hauling operations. The brothers continued to work hauling logs for another 10 years before deciding to jump into the harvesting side of the business three years ago.

The operation
Kris, Allen and Jamie now operate one of the most successful logging operations in the area, and provide significant employment and economic activity for the town that functions as the hub for most of northwestern Saskatchewan.

Brander Bros. harvesting operations typically run from June to March, and has an average annual harvest of 300,000 tons.

Approximately 75 per cent of the logs they harvest go to Tolko’s OSB plant in Meadow Lake. Kris says his company’s strong relationship with the Tolko plant has been a key to his operation’s success and growth.

“We wouldn’t be where we are today without the Tolko mill,” he says.

The remaining 25 per cent of the harvested logs are split between Carrier’s sawmill in Big River, Sask., and NorSask Forest Products.

“All the operations are cut-to-length,” Kris says. “About half of what we move now is our own volumes.”

Brander Bros. harvests a variety of species in the area including poplar, spruce and balsam.

“Spruce and balsam are the only two we separate,” Kris says.

The company owns a fleet of 25 trucks for its log hauling operations – a combination of Western Star and Peterbilt. Almost all of the trailers for their operations are manufactured by Saskatchewan-based Doepker Industries.

The Fleet
In addition to the company’s trucks and trailers, Brander Bros. is equipped with a diverse collection of gear for operating in the bush.

The company’s current lineup is a combination of Tigercat, John Deere, Caterpillar, Volvo and Case equipment; with Tigercat and John Deere making up the bulk of the fleet.

When it comes to keeping the equipment in tip-top shape, Brander Bros. are extremely self-reliant. The company does most of its servicing and maintenance out of its shop. It also has a good relationship with one of the local dealerships.

“We get good servicing out of Redhead Equipment,” Kris says.

Staying diverse
When the company isn’t busy harvesting logs from June to March, it is busy building and maintaining roads in the Meadow Lake area. The company maintains and builds 30 kilometres of improved bush roads (IBR). When the trucks aren’t hauling logs, they’re hauling gravel.

“When Jamie and I started working for OSB we built most of the street,” Kris says.

The company also has co-op fuel trucks that operate year-round, servicing the other businesses in the surrounding area.

With diverse operations, solid retention rates and planning, and strong relationships with the surrounding wood products facilities, Brander Bros. has positioned itself to be a leader in the harvesting and log hauling businesses in northwestern Saskatchewan for years to come.