Sundance Forest Industries Ltd. near Edson, Alberta must be doing something right. In what has been termed as the toughest time on record for Canada’s forest industry, Sundance is one of only a handful of mid to large-sized sawmills in the country that are running three shifts, and demand for the company’s products remains high despite low U.S. housing starts and a stagnant global economy. 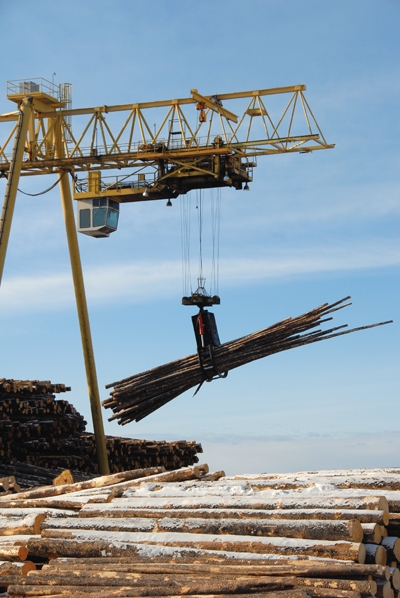 Xin Zhou, the operation’s amiable president and general manager who goes by “Joe” with outsiders and “Mr. Joe” around the office, says it is really pretty simple. “We give the customers what they want,” he explains. “We make everything and anything. If there is a request for it and we can make it on a machine centre, we will do it.”

Rod Goldie, operations manager at Sundance, estimates that throughout the mill’s history they have produced over 2,500 different products. Goldie is somewhat of an expert on the facility’s capabilities. He grew up on the original Sundance mill site 21 kilometres away where his Dad worked, and Goldie himself has been on the mill’s payroll for the past 30 years, including being employed full time by the company for the past 21 years. “We have produced smaller items such as furniture components, door and window stock, siding, fencing, decking, and even wood products that go into the core of snowboards and skis, to large products like telephone poles, house logs and fence posts,” adds Goldie who has seen numerous ownership changes at the mill, including the sale by the founding Corser family in the late 1980s to offshore investors from China, Hong Kong and Sweden. The current owners, Beijing-based CITIC Group (formerly the China International Trust and Investment Company), became the sole owner of the mill in the late 1990s when they bought out the other two partners.

It hasn’t been an easy road, but with the combination of CITIC’s commitment to the mill, a mix of European and North American technology, and hard working and dedicated Canadian employees, Sundance has carved out a niche market that produces 150 million BF of products annually. That volume includes many products that are beyond the scope of most sawmills. They do run traditional dimension lumber and finger joined products, sometimes from their own logs and sometimes as a remanufactured product from lumber bought on the open market, but this only accounts for about 15 per cent of the mill’s output. And even in these product lines, Goldie points out the “quality” differences that set Sundance’s products apart from the competition.

“We are taking this product through one more step to add even more value,” he says as we pass by a lift of perfectly finished, almost clear purchased lumber that is running through a moulder. He then turns his attention to another area where a team of Cat and Hyster forklifts maneuver around carefully wrapped pallets stacked with notched pieces of short lumber. “These will become part of a product for IKEA,” he notes while checking the quality of the shrink-wrapped product. Everywhere around the plant are collections of unique products from short pieces of lumber that will be used in Japanese roofs, to grooved decking for Korean coastal areas. However, dealing with so many different products and markets brings a number of challenges to the mill.

“This business is not for the weak of heart in the good times, never mind the bad,” cautions Goldie.
“Everyone from our production group to our sales team have to work together. We can be dealing with a furniture manufacturer that is putting out a catalogue for the entire year and you can’t change the price you give them half way through their production run, or we can be running a product that can’t have any blue stain or knots, so we have to be meticulous in our quality control.”

Both Zhou and Goldie credit the mill’s success to three things – the quantity and quality of their workforce, the raw material they have to work with, and the equipment they have in the plant.

“We try to do what some of the big players can’t and that includes successfully integrating value added products with commodity products at the same plant,” says Goldie. “We run somewhere in the neighborhood of 85 per cent specialty, but with that we have a lot of cost and a great deal of manual labour.”

275 employees, including 45 people who just handle maintenance over the three shifts, work at Sundance. And that’s just on site. “We actually start the value added chain in the bush,” says Goldie. “We have our own woodlands group who complete the block layouts and do the supervision, and then we have two local logging contractors we work with – Wilderness Logging and Westbound Logging. We have found that by minimizing the number of logging contractors we use, they each receive a substantial amount of work from us and they get used to our requests for up to 10 sorts in the bush, which helps us in the mill.”

As for the logs coming into the mill, Zhou says they can run almost any species but they stick primarily with lodgepole pine, and even if they do occasionally run a different species, they will only run one species at a time, unlike most SPF mills that sort for size but will process a mix of spruce, pine and fir through the same line. The company has a Forest Management Area (FMA), which is a mix of pine, spruce and aspen, so running mainly pine requires a fair amount of log trading with their neighbors – Weyerhaeuser in Edson and West Fraser Timber in Hinton, Alberta. “We set up our equipment for one species and then stay with it as much as possible,” explains Zhou.

On the equipment side of the business, Goldie points out that “Sundance has moulders, not planers.” He says this makes for a slower process but offers advantages in quality. “Extracting maximum value from the logs is one of the main things we look at in our production,” adds Goldie. “When the major dimension lumber producers are achieving a lumber recovery factor (LRF) of 275 to 300, we are generally seeing a lower LRF in the 200 to 210 range.”

The mill brings about 650,000 cubic metres of logs across the scale every year, which are off loaded from the logging trucks with a 19 tonne Texas-built Kranco gantry crane that runs on close to half a kilometre of track.  On a busy day, about 130 trucks will be unloaded after traveling an average of 125 kilometres from the cut block. Mill crews are in constant contact with the crane operator, providing information that will allow him to make the decision of dropping incoming loads onto “hot decks” for quick consumption by the mill, or moving them into storage for later use. In addition to the crane, three Cat 966 loaders move logs around the yard and feed the cut to length (CTL) infeed deck, which is just out of reach for the giant Kranco. About 15 per cent of the logs processed by the mill are CTL.

Once in the mill, tree length logs are processed through one of two bucking lines equipped with Perceptron scanning equipment. One of the bucking lines includes a butt reducer for removing excess flare. The CTL infeed is positioned between the bucking lines and a pair of VK Brunette debarkers. From the debarkers, the logs go to one of four sort decks with two of the sort decks feeding the mill’s large log line, a Swedish-built Soderhamn Eriksson line with some equipment from another Swedish manufacturer, Vislanda. This line includes Perceptron scanning, which creates a profile of the logs, followed by a quad band saw equipped with reducer heads. The line also features a Soderhamn canter followed by a Soderhamn board edger and then a Vislanda canter/reducer and a Vislanda gang.  The other two sort decks feed a similar line that is primarily Vislanda equipment.

Boards from both lines are sent to a 68-bin Newnes J-Bar sorter and then to a Newnes stacker before heading to one of six Wellons dry kilns, all powered by thermal oil from the mill’s own Wellons thermal oil plant. Correct drying is critical for the mill as in many cases their products will be processed further by another company. “With specialty products we might have drying times that range from 72 to 146 hours,” says Goldie. “We pride ourselves in our quality and because some of our products will be ripped and glued by someone else, we can’t have any movement.”

Once dry, further processing is primarily done in one of two on-site buildings. The first stop is the sorting facility where boards are sorted for grade and size based on customer need. At this point, some lumber may be pulled rough and sold, some is processed further with various pieces of equipment, including a Baker sawline, a Newnes trimmer and a Weinig moulder, while the remainder is moved to the yard to fill orders that are in the works, or is transferred to the facility’s 80,000 square ft. remanufacturing plant. Known on site as the “SunPlus Building,” this area houses a Western Pneumatics Finger joint machine and an extremely accurate and high tech WoodEye Cross Cut scanning system from Sweden. The scanner is integrated with a Danish-made System TM chop saw line, two Weinig Hydromat moulders from Germany and six System TM automated stackers that can handle products ranging in size from 16 inches to 10 feet. Throughout the sawmill and reman facilities, a number of the process control systems in place are from ATS Automation, a small company based in the Vancouver suburb of Richmond, that specializes in the design of PLC and computerized Industrial Control Systems for independent sawmills.

Almost all of Sundance’s products leave the mill wrapped and they have numerous wrapping systems in place, including an AutoWraptor that is made by J. Desco Inc. and marketed by Signode. This system automatically wraps loads with a tight plastic film to maximize package protection and production efficiency without using staples.

Keeping everything in top shape is the responsibility of the mill’s maintenance personnel and they have a number of workshops and saw filing rooms strategically located throughout the site to handle this task and to store the more than 290 cutting heads Sundance uses to handle various profiles. The saw filing rooms are filled with numerous pieces of equipment, including major gear from Armstrong and Vollmer.

Finished products are kept in the mill’s 22,000 square ft. covered storage area and are mainly shipped out by container through the mill’s two-bay container loading dock. The mill has four on-site sales people and works with a cooperative export sales group called Interex. With offices in Vancouver and
Tokyo, Interex also represents Millar Western, Carrier Lumber, Dunkley Lumber and Ainsworth. Almost all of Sundance’s products are Sustainable Forestry Initiative (SFI) certified, which Zhou says helps them in all markets.

Sundance has developed a keen sense of where the markets are for their products. This, combined with international ownership and their interesting mix of equipment has given the company a global perspective that provides them with a real advantage over the competition, says the Beijing born, Canadian educated, and Chinese and American trained Zhou, or Mr. Joe. “We are essentially running a European system in a western Canadian interior mill and marketing our products to the world,” he concludes.