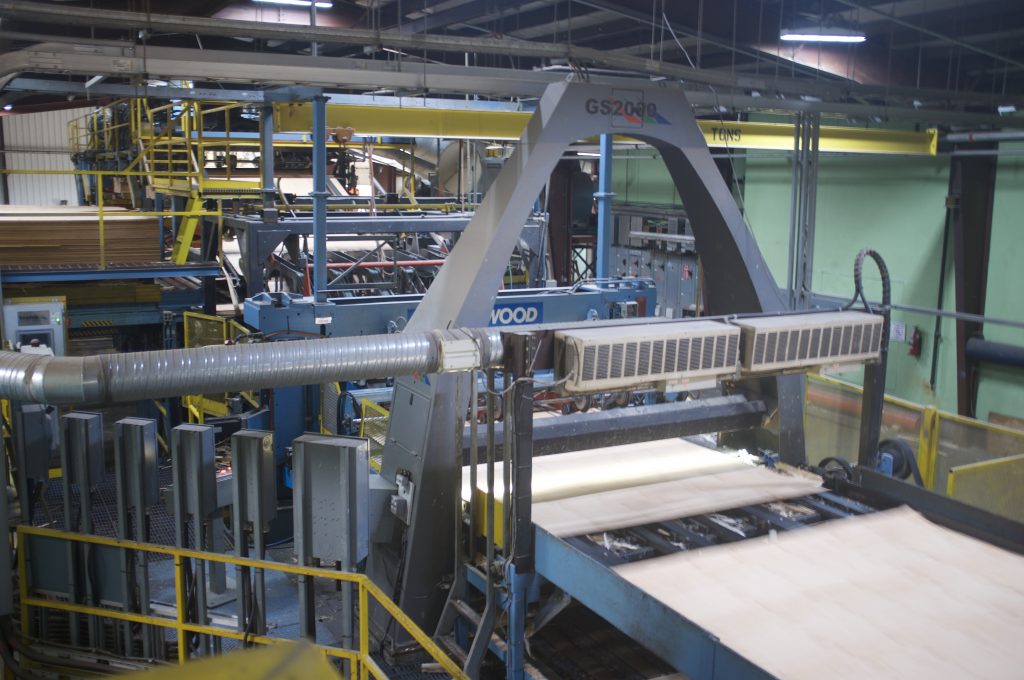 ATCO’s primary product is softwood veneer, but that is far from all they do.

The pretty little village of Fruitvale, B.C., is just about the last place you would expect to find a bustling softwood veneer facility, especially considering the plant is not located on the far-outskirts of town, but close enough that employees can stroll down the main street for a bite to eat on their lunch breaks. Equally surprising is that the mill does not look out of place; the tidy buildings are tucked behind tasteful landscaping and flank a meandering stream straight out of a Norman Rockwell painting. A 1957 powder blue locomotive sits out in front of a new ATCO Wood Products sign made completely from veneer products.

ATCO’s veneer plant, and the sawmill that preceded it, have been welcome fixtures of the Fruitvale community for more than 60 years. Atle Nelson Sr. started the company in 1958. ATCO is a combination of ‘Atle’ and ‘company’. Nelson had six children and several of them ran the company at various times. In 1992, Ted Nelson became president and when he retired in 2007, he sold it to his daughter, Rebecca Weatherford. She renamed the company ATCO Wood Products Ltd. and took over as president. Rebecca’s husband, Scott, joined the team as the company’s CEO and they were off and running.

Although neither of the Weatherfords had sawmilling backgrounds when they took over, Rebecca’s experience in the hospitality industry working for several large hotel chains and Scott’s engineering background and knowledge of the trucking and equipment industry have served them well. Understanding and respecting people and managing the orderly flow of materials and machinery is universal to any manufacturing business, and a veneer plant is no exception. Unfortunately for the Weatherfords, 2008 was the beginning of a difficult time for Canada’s forest industry. ATCO weathered the downturn by making chips for a local pulp mill while running the plant at a reduced pace.

In 2011, ATCO purchased a short-line railroad to the nearby community of Trail, B.C. The rails were laid in the 1890s as a conduit for minerals and lumber from the West Kootenays to Pacific Northwest markets. The line shifted hands several times and the section from Fruitvale to Nelson was closed altogether until ATCO purchased the tracks as a vital part of their transportation strategy. With the addition of a reload facility at Columbia Gardens in Trail, ATCO offers others the opportunity to take advantage of one of the few locations on the Canadian/U.S. border crossed by an American rail line.

Since the Weatherfords became involved in the company, the well-being of their employees has been a priority. Safety is always No. 1 and ATCO is justifiably proud of its safe work climate. Every work station features iPads that contain all of the safety procedures for every job, a recent innovation to a safety program that is being constantly upgraded, leading to significant reductions in the number of reportable first aid incidents. 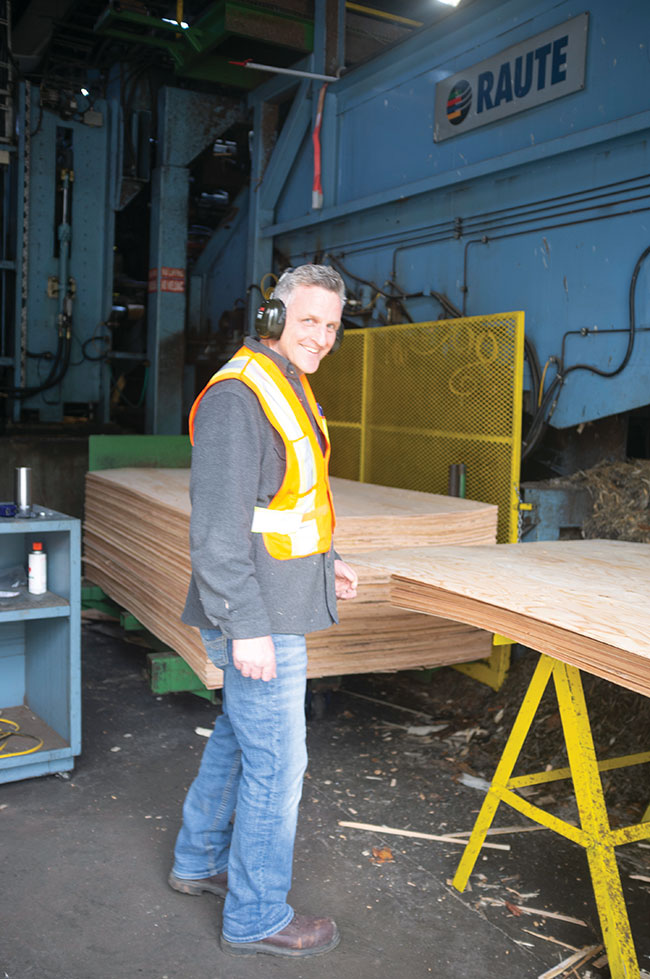 The plant employs 65 people directly and contracts another 60. More than 75 per cent of the production and maintenance materials are locally sourced, keeping employment and money in the surrounding community.

Perhaps it’s a little cliché to say that a company values its employees as family, but in ATCO’s case, that is absolutely true. In return, employees are expected to treat each other with respect and honesty, and to work together as a team. The employees take pride in what they do and it shows in the smiling faces you encounter while touring the facility.

ATCO’s primary product is softwood veneer, but that is far from all they do. The company uses what I like to call the “full buffalo” approach to manufacturing. Every bit of every tree that enters the facility is used to generate income. Cores left over once the veneer has been stripped from the logs are used for landscaping ties. They are shaved on the top and bottom and are sometimes stained per customers’ requests. Bark becomes high-grade ground cover. Logs that are not used are turned into firewood. Wood chips go to the pulp mill for paper production. Forest resources are paid proper respect as nothing is wasted.

The mill uses approximately 200,000 cubic meters of fibre per year and produces about 130 million square feet of veneer. Sixty per cent of production is sold into the U.S. while 40 per cent is used domestically. Logs retained for production are primarily Douglas fir, larch and spruce, depending on customers’ requirements. The lathe can handle logs from nine to 30 inches in diameter, while off-size and unsuitable species are horse traded with other mills.

After the logs are brought into the building, they pass through a VK Kodiak double ring 36-inch debarker. They are trimmed into blocks of 103.5 inches and fed into peeler bins, which are then moved to the conditioning chests. In addition to the older chests, which use hot water to soften the logs, ATCO is experimenting with new chests that use technology from Windsor Engineering in New Zealand. The Windsor tanks use clean atmospheric-pressure steam inside an insulated chamber to condition the logs in preparation for peeling. The new equipment is said to be cheaper to run and uses less water. A test unit is being installed that will handle 30 per cent of ATCO’s current capacity. If the project works out, the rest of the chests will be converted. 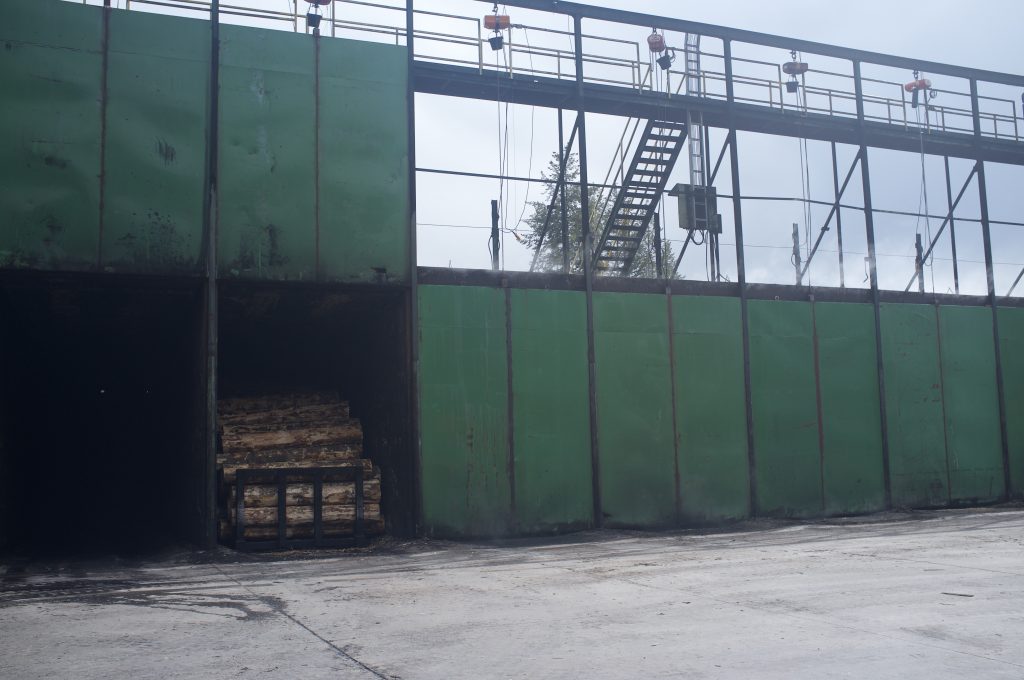 Logs are trimmed into blocks of 103.5 inches and fed into peeler bins, which are then moved to the conditioning chests.

After softening, blocks are sent to a Raute X-Y charger and then peeled into veneer by a Premier Gear lathe with Elite Automation controls. A very quick trip through a Ventek scanner accurately plots out the perfect cuts to be performed by the Raute clipper, which trims it to size before it goes through the Altec thickness monitor. From there, sheets are sorted by the Raute stacker into four bins where they are prepared for strapping and shipment to customers. 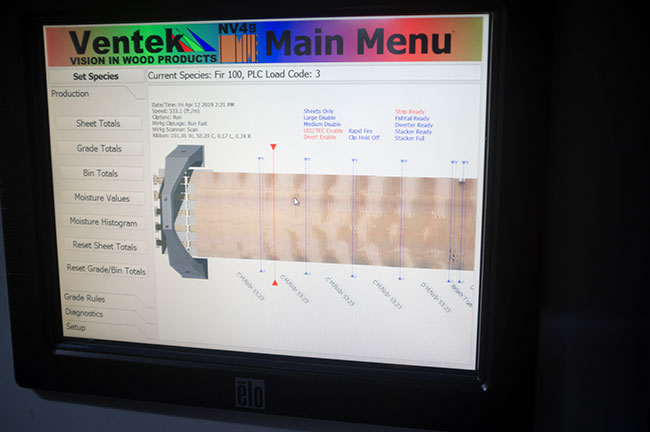 A Ventek scanner accurately plots out the perfect veneer cuts for the Raute clipper.

Another new project that is starting to pay off is a new dust collection two-stage cyclone purchased from and installed by B.C.’s Corbilt Welding and Fabrication and Wrangler Engineering.

These days all of the best forest companies take the environment very seriously and ATCO is no exception. In fact, ATCO has been known to turn down offers of timber where the harvesting methods or the location didn’t meet their standards. Much of their fibre comes from tenure, while some is privately purchased, and some sourced from their own land managed by ATCO’s company Voran Skoog, which is Swedish for “our forest.” Voran Skoog doesn’t just refer to ATCO’s own land – it represents what they know to be true of all trees in that they belong to all of us; they are quite literally rooted in our communities and as such must be respected and used responsibly.

ATCO works closely with user groups such as watershed custodians and recreational groups to determine how to best use the resource and how to harvest sustainably and responsibly while minimizing impact. ATCO plants over one million seedlings every year and its foresters are adept at bringing the young trees to a point where they are self-sustaining. 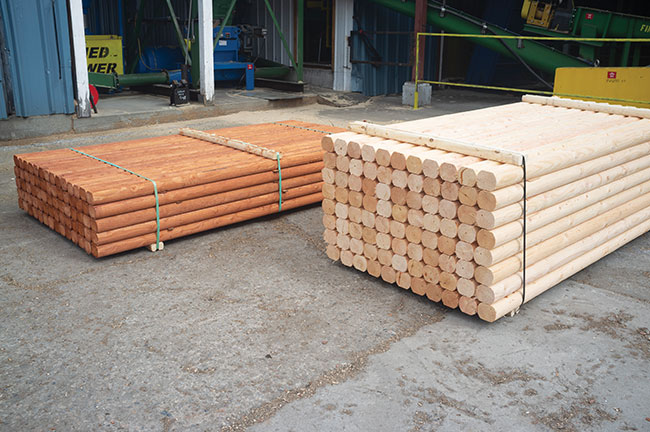 ATCO Wood Products in Fruitvale, B.C., uses approximately 200,000 cubic meters of fibre per year and produces about 130 million square feet of veneer as well as other specialty products.

But there are challenges the company has to overcome in order to continue receiving the log diet they need. Land is constantly being removed from the working forest for private property expansion, new parks, and other infrastructure associated with a growing population. Fibre demand keeps increasing, but the supply is never going to meet demand, so companies like ATCO must add value to the logs they harvest. Scott is closely involved with the Interior Lumber Manufacturers’ Association, which works tirelessly to ensure the right logs go to the right mills, so they will be used to their full potential, rather than feeding high-value logs into low-value products.

The current lumber downturn has affected ATCO, as it has most B.C. forest companies. The slowdown started in the fall of 2018, but really took hold in December, when falling prices and increased stumpage fees combined to create a difficult environment for Scott and his team. While it’s difficult to see a light at the end of the tunnel, “hope is not a strategy,” Scott says. “A responsible mill owner reacts to market changes by examining their business model, making adjustments as required and using the increased pressure as motivation to add value to their existing products and services.”

Along with respecting the trees, forest companies must respect the community they live in, and, for ATCO, there was never any question of doing otherwise. They are active in forestry education through schools and community events. They donate firewood to local groups for fundraising and provide bark and woodchips for playgrounds. They also support charities such as the local hospital, food bank, and Girl Guides of Canada and Scouts Canada groups. Every year, ATCO offers Santa-themed Christmas train rides down the short-line, which has become a seasonal favourite in the community. Activities such as this, and their success in business, led to ATCO Wood Products being presented with the 2018 Canadian Family Enterprise of the Year by the Family Enterprise Exchange.

The future looks bright for this family-run veneer plant tucked away in a quiet corner of B.C. Constant research and development and a commitment to modernization mean that incremental upgrades are always ongoing.

The possibilities are endless: a veneer drying plant would increase the value of their product and isn’t out of the question down the road; a larger machine shop is on the drawing board; and new mobile equipment is always on the wish list. ATCO has become well known for the quality of their veneer and it seems certain that the company will continue to be a West Kootenay feature for many years to come.