Sept. 7, 2016 - While logging contactors across Canada continue to struggle with stagnant logging rates, climbing machine costs, and staffing, those in Quebec have a unique set of challenges and opportunities. These are some of the findings of a national logging contractor survey done by Canadian Forest Industries and Operations forestieres et de scierie magazines this past spring. In general, Quebec contractors reported the following:

Rates & profits
When it comes to the logging rates paid to contractors, Quebec seems to have been the worst place to try to negotiate better rates over the past three years. Across Canada, only 41 per cent of contractors saw a rate increase in the past three years. That’s not a great trend, but it gets much worse for Quebec loggers, with only 17 per cent having seen a rate increase during the same period.

As for profits, Quebec loggers sit in the middle of the pack, with 17 per cent claiming to have made no profit last year, the average across Canada as well. This puts Quebec ahead of Ontario (31 per cent saw no profit) as well as the BC Coast (21 per cent without profit).

Quebec also sits in the middle of the pack for trends in logger profitability, where unfortunately 46 per cent of Quebec loggers say profits were lower last year than three years ago (Canadian average was 41 per cent). On the other hand, Quebec had the second lowest number of contractors report that profits were higher than three years ago. At 13 per cent, only Alberta had fewer loggers say profits had improved, and that province saw the collapse of its oil and gas sector in that same period.

Operator pay
Obviously the hourly rates paid to machine operators will vary greatly by region, with competition in places like BC and Alberta driving rates higher than elsewhere on average. Still, Quebec was the only province east of the Prairies where some operators make in excess of $30/hr (benefits excluded). That was the case with just 13 per cent of respondents, and compares to 50 per cent of more out west, but it’s still an oddity.

The vast majority of operators make between $21 and $25/hr, thus faring much better than those in Atlantic Canada, where 80 per cent make less than $20/hr. Still with 26 per cent making less than $20/hr, Quebec still skews to the lower side of the industry pay scale. In neighbouring Ontario for instance, 62 per cent make $21-$25/hr and the rest make $26-$30/hr.

Employee benefits show similar patterns versus loggers elsewhere, with 50 per cent claiming to pay some operator benefits versus 44 per cent in Atlantic Canada, 54 per cent in Ontario and close to 90 per cent in BC.

Workload
If Quebec contractors and operators tend to skew to the lower side in earnings, they are in part compensated by working fewer hours on average than loggers in the rest of Canada. Just 38 per cent of Quebec contractors claim to work 55 hr/wk or more, compared to 75 per cent in the BC Interior and 77 per cent right next door in Ontario. Even in Atlantic Canada, where profit margins and wages are lower, 63 per cent of contractors claim to be working 55 hr/wk or more.

Still, it’s not like logging in Quebec is a relaxing gig. An additional 25 per cent work between 51 and 55 hours a week, meaning that 63 per cent are still working well beyond a typical work week. The life/work balance may be better among Quebec’s contractors than their counterparts elsewhere, but it is still nothing to brag about when trying to attract the next generation of loggers.

A similar picture emerges from harvesting volumes, a reflection both of fleet size and tree size no doubt. About 50 per cent of Quebec loggers harvest 50,000 m3 or less, while only 15 per cent of loggers in Ontario fit this bill, and just six per cent in the BC Interior.

Contractor age
Perhaps the biggest surprise from this year’s survey is the relatively young age of Quebec’s contractor force. Only 13 per cent of Quebec respondents placed themselves as 56 years of age or older. Compare that to 46 per cent in Ontario, 44 per cent on the BC Coast, and 36 per cent in Atlantic Canada, all regions that need to treat succession planning with urgency.

Also astounding is that 42 per cent of Quebec contractors are under 35 years old. The closest province to that is Ontario with just 18 per cent under 35.In the rest of Canada that younger range is 10 per cent or less, positioning Quebec as a succession leader.

Still another surprise in Quebec centres around retirement plans. Despite the large youth movement, a full 48 per cent of Quebec loggers expect to be out of the industry in fewer than 10 years, lower than most regions but higher than expected. Whatever Quebec has been doing to inject so much youth into its contractor force they’ll need to keep doing for a few more years yet.

The survey was conducted in April 2016 for Canadian Forest Industries and Operations forestieres et de scierie by independent research firm Bramm & Associates, generating over 230 replies to a detailed list of questions. Many thanks to our sponsors for making the research possible – Hultdins, Stihl, Tigercat and Ponsse. 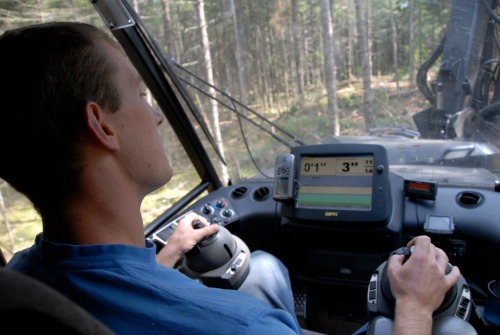