Apr. 9, 2014 - The Lac Mégantic tragedy has brought the transportation of hazardous material by rail to the forefront. Confronted by this issue of economic and social importance, provincial, federal and local governments have had to make some decisions that will have a significant impact on the forest industry.

Wood is not considered a hazardous material to transport, however, the industry has been under social scrutiny, particularly in regards to the safety and maintenance of the rails and its equipment. Maintaining the system is expensive for small operators, especially over the long distances between sawmills and their clients. Projects transforming railway tracks for local uses such as bicycle lanes, snowmobile tracks, or for rail tourism can provide a use for these century old railways when they are no longer needed.

When resources and goods are no longer being transported by rail, trucking is the only option left, which multiplies the shipping costs. During the Lac Mégantic tragedy, Mayor Colette Roy Laroche said: “Without trains, it’s very difficult for the businesses in our industrial park. Trucks supply the companies that ship as well but trucks don’t carry hazardous materials. They’re essentially transporting wood products.”

That’s why, despite the dramatic tragedy the locals endured, the trains are running again … only a few months after the explosion.

Beyond human tragedy, rail routes in Gaspésie demonstrate the lengths to which a region will go to conserve rail transport. Railway tracks were supposed to be dismantled and sold as raw material to China. In 2006, Alain Tremblay, the president of St-Elzear sawmill said: “Gaspésie was penalized because our mills are far from related products. There is no infrastructure to deliver our chips at a reasonable price. We’re surrounded by water, shipping ports are everywhere but we have no infrastructure to send our products.”

He also denounced the lack of viable alternatives to ship wood products. Without rail and no infrastructure at the ports, trucking remains but it is way too expensive to reach the furthest clients. “The mills that used our shavings weren’t always so far away. But we have no other options,” he remarked sadly.

Chinese investors were ready to pay $25 million for the dismantling of the rails and the raw material while the Quebec government was willing to pay only $5 million to buy them. Tremblay asked himself what it would cost to build a railway that would connect Gaspésie to the rest of Quebec, in 2006, and was looking for greater government participation.

“What do they think it would cost to rebuild the rail line today? Imagine the infrastructure, the bridges, all of that would takes years and millions to build.” According to Gaspésie’s Rail Society, the cost of rebuilding the line would be more than a billion dollars.

So after $35 million dollars in government aid, the municipalities of Gaspésie have formed a corporation that now owns the region’s railways. This mobilization has allowed for the conservation of passenger trains through Via Rail, consolidated the forest industry and it plans other projects like a tour train and the delivery of windmill blades by train. According to plans, the local ownership of the line has become a means of economic development for the region.

The greatest result of this operation has been the resumption of chip delivery from the Temrex sawmill, a manufacturer of softwood lumber. The transformation is the result of the amalgamation of the Saint-Alphonse and Nouvelle sawmills, for sawmilling and planing. With an annual production of 150 million board feet of pine and spruce, Temrex is one of the largest softwood sawmills in Gaspésie.

On the other hand, there is still a lot of money to invest to maintain the rails according to safety standards. According to Olivier Demers, the general director of Gaspésie’s Rail Society, the previous owners had neglected the rails for the past 30 years and it’s important to bring them back up to date. Since 2007, freight transport has been on the rise but it hasn’t brought in enough funds to pay for its maintenance. The society has managed to make a profit by reducing costs: buying trains rather than renting and raising prices.

The group is now asking both provincial and federal governments for $20 million over five years to maintain their finances while undergoing a modernization of the 300 km stretch along two axes, the lines (signals, crossings, rails, sleepers and culverts) and 95 bridges (which make up 70 per cent of the maintenance costs). Most of these structures are more than a century old. The society plans to invest $15 million in the project including the tour train, a new station in Gaspé (in collaboration with the municipality), and the transportation of wind turbine components in addition to allowing companies in the sector to enter the territory more effectively and to be more competitive. Dismantling is not an option. The railway is the region’s connection to economic viability and local jobs.

Journalist Gilles Gagné says the Gaspésie example is transferable. He uses a case in New Brunswick as an example: the railway brings in considerable revenue with 11,000 cars at its disposal and railway traffic five times higher than in Gaspésie.

In Quebec, thousands of cubic metres of timber are carried from one end to the other and to markets along the Atlantic. In March 2013, TYT Group announced an investment of $750,000 to develop its first transfer terminal in Quebec to serve the North Shore, Beauce, Mauricie, Saguenay, Bas-du-Fleuve and other regions. Transfer capacity in Quebec could double to 6,000 cars per year.

Examples of dismantling and rail line salvages abound but Quebec’s forest industry is only able to take advantage of rail lines that are in operation. 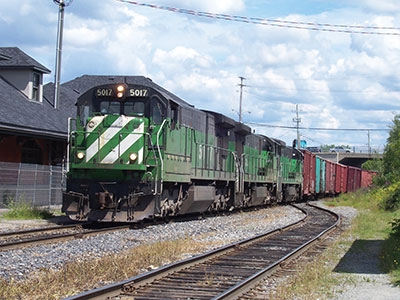 When resources and goods are no longer being transported by rail The Lac Mégantic tragedy has brought the transportation of hazardous material by rail to the forefront.
Print this page