The ever-enthusiastic Serge Simard walks me through an ideal roadside planting area almost two hours from town. The silviculture superintendent for the Girardville Forestry Cooperative is keen to show me some good and not-so-good examples of raised-site planting in this massive burn zone just recovering from 2005’s record fire year. And why not? We have the time. Our driver for the day, Bracke’s Jean-Luc Hudon, has locked the keys in our pick up, and is doing his best Grand Theft Auto impersonation with his truck’s aerial. What’s a day in the remote Quebec woods without a little adventure?

The co-op is a large-scale CTL harvesting and silviculture operation based just outside of Dolbeau, a forestry centre in the famous Lac St. Jean region. For the past few years the region has seen an explosion in new site prep gear and silviculture techniques, as industry and government alike come to terms with an ailing industry and dramatically reduced AACs (See CFI Nov/Dec 2008 at www.canadianforestindustries.ca for more details on this, and the use of Bracke mechanical planters to put the maximum volume of land back into production).  In 2008, the co-op planted well over 20 million seedlings, treated some 15,000 ha, and harvested over 200,000 m3. Much of that work was done with a new fleet of site prep gear brought into service over the past three years.

Simard says the impetus for modernizing its mechanical site prep fleet came from several directions at once. For starters, the aging fleet of site prep gear was getting a little embarrassing. “You’re talking about equipment bought in the last rush of site prep investment in the 80s. How many other sectors of the forest industry are relying on 25-year-old equipment for all of their work? A lot has changed in 25 years in equipment in general – efficiency, computers, production. It was time.”

Moreover, some key players in the co-op, as well as the local MNRW, had been to Scandinavia to compare reforestation methods and results there with what was being done in Quebec. Given the province’s reliance on protection of advanced regen and discouraging of herbicides, there were no doubt more differences than similarities between the two jurisdictions. Still, one thing that really stood out to the visitors was the use and impact of raised-site, or mound, planting.

“There is actually a site not too far from here – north towards Chibougamau – where you can compare the results of raised-site planting with traditional planting in local conditions,” notes Bracke’s Hudon. “The results are stunning, but it’s not an official study site, so there are no numbers to convince the ministry to change, for example. In Sweden, you can stand among trees planted on different elevations on the microsites, and the data are there. It had a big impact on the co-op and the local ministry officials.”

That potential productivity boost leads us to the final, and perhaps largest reason for the investment in new site prep tools and techniques – Need. Like the rest of Quebec, the region is still dealing with the aftermath of an average 20% cut in AAC resulting from the Coulombe Commission. “It’s really pretty simple,” explains Simard now that we’re back in the pickup. “We can’t continue with business as usual. We have to adapt, innovate, change, and get better all the time if we want to survive and compete. We have to be willing to re-invent our business. This is part of that.”

“The T26 does a better job – There’s no question,” says Simard. “So of course both the ministry and AbitibiBowater would like us to use them,” he says while watching operator Fréderic Tremblay run one of two T26as working this site on John Deere 748 skidders. Simard says that the differences between the older and new models are many, and impact both weekly production and quality. Pure head-to-head production varies 4 to 5% according to year-end comparisons.

“There’s not nearly as much downtime or maintenance, so there’s more production time there,” Simard explains. “The teeth are now easy to change out – no more welding – so that’s another gain.”

The biggest difference is the quality of the planting sites left behind, and Simard lists several reasons for this. The machine uses larger planetaries, allowing it to work through more material and still create good sites. It also uses hydraulic shock absorbers that put the disc back on the terrain immediately after an impact or obstacle, maximizing the treated area. Finally, with the T26a, site prep has entered the computer era, as Bracke’s Hudon explains.

“The programmable controls are maybe the biggest improvement over the original models. With the older system, you’d treat every metre exactly the same, regardless of terrain, moss depth, amount of slash and debris. These are all big variables here. Now we have six preset programs that can be fine-tuned to local conditions. That allows the operator to respond to changes in site conditions instantly, and as often as
required.”

That in turn puts more responsibility on the operators to remain alert, and on the co-op to educate them to various site conditions and what can be done to use the programs to compensate for them. Hudon says the better operators respond well to the challenge.

“ In some sites, you could change the program eight or 10 times an hour to get the most from the machine and create the best planting sites. Pushing the button is easy – that’s what it’s made for. The harder part is getting the operator to recognize the different growing conditions and to respond as required.”

Still, feedback from both AbitibiBowater and the ministry means that, for the most part, they are responding.

“It’s simple,” Simard concludes. “They’d like us to use the new trenchers on all their jobs. Only it’s not that simple, as we still have members (owners) with the older models we have to phase out. But the results point that way.”

On High
Building on that success, and increasingly convinced of the benefits of raised-site planting in terms of yield from the forest, the co-op added a Bracke M36a mounder for the 2007 season. Now finishing its second year, the three-row mounder is still the only one of its kind in North America. Still, the sophisticated site prep machine is also proving to be a good investment. The M36a is best suited to a powerful 8WD forwarder, and the co-op’s unit is no exception. It is mated to a new Ponsse Elephant (to see this mounder in action, watch the linked video at www.canadianforestindustries.ca).

CFI saw it working a massive burn salvage site over two hours from Girardville, itself almost seven hours northeast of Montreal in good weather. Nearby, another T26a works a smaller patch, a messy site full of slash, deep moss, and an incredible amount of rock. As Hudon explains, deciding where to use each machine is as much art as science.

“With the planter, the trenchers, and the mounder, the co-op now has the option of using the best tool for each job. For starters, the size of the area to be treated is a factor. You won’t likely bring the mounder into a 10 ha site – The large forwarder is harder to float, and takes more time to turn, so the smaller block will counter any gains. You’d use a trencher. But give the mounder a 50 ha site without too much moss, and it will create ideal microsites in a hurry.”

“Too much moss” for these parts means substantially more than six inches deep. Beyond that, or in sites with an abundance of rock or small pockets, the co-op will use a trencher. But where it works, and there are no shortage of sites to fill the mounder’s schedule, it will treat 1.2 ha/hr versus 0.9 ha/hr with the newer T26a. Working about 20 hours per day, four days a week, the M36a has been averaging over 100 ha per week, including downtime or other delays. Hudon adds that the four-row M46a will manage 1.6 ha/hr.

The downside, Hudon admits while watching the nearby trencher struggle through a rubble pile, is that the trenchers can end up getting a greater volume of poorer sites, with the larger, gravy sites going to the more efficient mounder.

“It’s a balancing act now,” says Simard. “We have to apply the machines where they will give the best results, but at the same time we have to keep our members (machinery owners) working in a way that allows them to make a profit. There is more management involved now as far as which machines to schedule where, but I don’t mind. It’s what we wanted. In the end, it means we have a larger tool box now to choose from.”

Nor are they alone in the Lac St. Jean forestry region. They may have the only M36a mounder for now, but their three T26a trenchers are part of 13 of the new models working the area, and their two mechanical planters are part of a fleet of five. Given the response from both ministry and industrial clients, there will likely be more next year.

For now Simard and company continue to work with the MNRW, its operators, and its planters to develop “best practices” guidelines. As far as planting goes, Simard says the final word from the MNRW has yet to be given, but he works with planters in the meantime to teach them a pecking order for choosing the best spot in each microsite.

“Up here is best,” he says as we walk that ideal site en route to town. He’s pointing to the top of the mound, but cautions that there are variables that planters must consider. “But if there is too much air underneath, or a big rock there, then we prefer here,” he adds, touching a spot about halfway down the mound, but still out of the neighbouring depression. “Teaching the planters to make these decisions at the pace they work is part of the process of course, but we continue to progress.”

The co-op also waits a full winter for the snow load to settle things down before planting. That way the mounded site the planter sees is likely to stay that way in the coming years.

For Simard, a longtime forest harvester foreman who deliberately changed to silviculture when he joined the co-op in 2006, it’s all very new and exciting. Even as he and his crew continue to fine-tune the new equipment and methods, new opportunities continue to arise. This includes using the trenchers to create planting conditions similar to those made by the mounder in some areas.

“We’re looking at using the program in the new trenchers to create more mound-like conditions where the ground conditions permit. We have to get approval from the ministry of course, but I can see it coming.”

And it’s that attitude that impresses observers like Hudon. “They are very dynamic and progressive in all aspects of site prep and planting. They go to Sweden almost every year to look at opportunities to maximize the yield here, and to improve. It’s very rewarding to work with them as a result.”

Of course the true reward of all this effort will come a few decades from now, when future foresters look at these young stands and start considering their own options. If Simard and others like him in northern Quebec have their way, there will be more options than now. 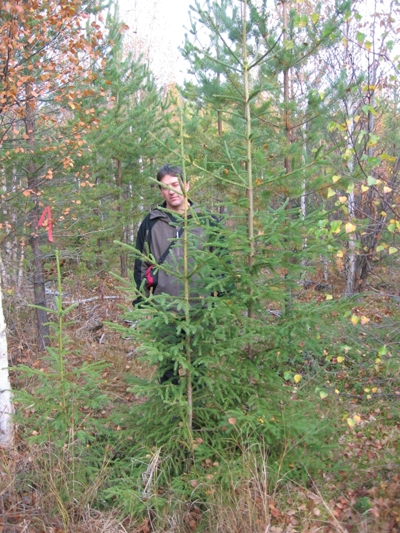 Bracke’s Canadian service and training rep Jean-Luc Hudon hides behind seedlings planted on raised or not so raised sites. “When the co-op and ministry saw these The ever-enthusiastic Serge Simard walks me through an ideal roadside planting area almost two hours from town.
Print this page