Lemare Lake Logging has built its reputation by excelling under extreme circumstances. 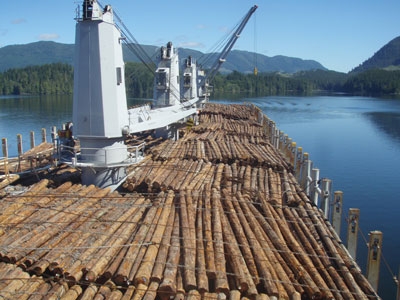 A log vessel in Cultus Cove with a load of wood bound for China. Lemare Lake Logging has built its reputation by excelling under extreme circumstances.

To say Eric Dutcyvich’s logging crews are frequently challenged by working conditions in northern Vancouver Island would be an understatement. “In some cases we’ve had to drill into sheer rock face and establish a beachhead that would enable us to unload our equipment barge,” he says. “Up here it’s all about the huge stands, rock and mud – and of course, lousy weather.”

But like so many people who make a living in this rugged region of British Columbia, Eric and his brother, Chris Dutcyvich, who co-own Lemare Lake Logging, were seemingly born to deal with extreme situations. Longtime Port McNeill mayor Gerry Furney sensed this as he watched them grow up. “They were smart kids and absorbed a great deal of knowledge from their father, Dave Dutcyvich,” he says. “I had no doubt they would distinguish themselves in the logging community.”

Today Lemare is one of the largest logging and roadbuilding contractors in B.C., with an equipment inventory of 300-plus machines and an equal number of employees who every year build about 200 kilometres of road and harvest one million cubic metres of the mixed hemlock, balsam and cedar stands of the coastal rainforest.

At a time when logging has become, according to Eric, “more about financial hacking and cutting than building a future,” the brothers’ approach to business is what differentiates them from the competition: in addition to logging, Lemare also provides log marketing, custom cutting, engineering, custom dryland sorting and construction services, all with the aim of keeping crews and equipment busy year-round. “One of the ways to develop loyalty with your crew and improve efficiency in your operations is to provide consistent work, plus diversifying one’s forestry portfolio is the key to long-term survival,” says Eric.

Logging remains Lemare’s bread and butter, and in this realm its crews are a rare breed. “One of the areas they’ve made a name for themselves in is true pioneering logging, taking contracts other people won’t handle,” says Furney. “They go into places that haven’t been touched by humans. Their equipment is brought in on barges and low beds, and the first order of business is to get the backhoe going to open up the terrain and determine the most practical way to build the roads.”

Furney, a former truck logger, adds, “It’s all very well to have a lot of equipment, but the only way you can do pioneer logging successfully is if you have excellent crews and a lot of experience. Planning ahead is critical, and you quickly find out that welding torches and a good supply of oil are as important as the harvesting machinery.”

To which Eric, 45, replies, “We spend enormous sums of money and a great deal of energy on safety and training in order to maintain a workforce that is second to none. And given the physical conditions in which they operate, we’re equally diligent about maintaining and repairing our equipment.” In 2003, the Dutcyviches opened a 20,000-foot service shop just south of Port McNeill, managed by chief mechanic Ian Zimmermann, that can strip any machine (including Lemare’s Hitachi-Deere 450 log loaders with Waratah heads, Madill 144 grapple yarders and Madill 4800 log loaders) down to its frame and rebuild – in the case of the older machines, often better than new. “It’s one of the largest maintenance facilities owned by a logging company in the world,” says Eric. “We wouldn’t be able to function without it, considering they’re not making any more grapple yarders or off-highway trucks, and considering our units are subjected to enormous stresses in the form of buckets constantly biting into rock and log trucks manoeuvring uneven terrain.”

The Dutcyviches maintain a core of well-maintained heavy equipment to handle the steady work. This is accomplished with a combination of relatively new equipment and in-house rebuilds. In addition to action repairs and regular maintenance, Zimmermann and his staff of 37 always have a number of rebuilds on the go. “We take advantage of advances in safety technology and so forth, and we can manufacture almost any part in our machine shop,” says Eric.

For travelling to work sites, Lemare has a large fleet of Ford pickups and Argo crew boats powered by Volvo engines. The Dutcyviches favour Hitachi-Deere equipment for processing, Madill 4800s for loading and Madill 144s for grapple yarding.

The 35-unit trucking fleet consists of Pacific P16s and old Hayes machines, and the construction fleet consists of John Deere 450s and Hitachi 450s. The preference for these machines is the result of years of use, says Dutcyvich, and they are chosen because they are efficient and dependable.

Lemare’s prominence as one of B.C.’s biggest contractors hasn’t gone unnoticed by the outside world, as any follower of reality-based television programming will attest. Much to Eric’s chagrin, the exploits of his crews have been immortalized via the popular History Channel series Ax Men. When the series debuted several years ago, U.S. audiences were introduced to Lemare by a tough-talking narrator who intoned, “Everything is bigger north of the border: bigger wood, bigger equipment, bigger headaches. Meet Lemare Lake Logging, a crew that works sites so remote, they set up camp and live on floating barges for months at a time.”

Eric groans at the mere mention of Ax Men. “Reality television is about 20% truth and 80% fiction,” he says. “The Ax Men producers and camera crew are good guys, but I haven’t seen a single episode, nor have many of the people in my company. As my brother likes to say, check your ego at the door!”

So how did the Dutcyviches manage to get embroiled in television? “The BC Forest Service gave the producers referrals, and when they came to me and asked how much money I wanted, I stated a price I was sure would make them walk away in disgust,” says Eric. “Instead they agreed, so I then had to ensure that the camera crew was sequestered in one of my more isolated camps so as not to hinder the bulk of our workforce, which typically logs closer to Port McNeill.”

Celebrities they are not, but in the best sense of the word the Dutcyviches are opportunists who for the past two decades have been motivated by fluctuating market conditions, environmental pressures and ongoing friction between the Canadian and U.S. governments. Lemare was formed in the mid-1980s when Dave Dutcy-vich purchased his longtime employer, Inlet Contractors; the Dutcyviches performed stump-to-dump work and road construction for Canfor and Weyerhaeuser (then MacMillan Bloedel), both of which have large timber tenures on northern Vancouver Island. Via the provincial government’s small business program, they also logged for other timber sale bidders.

Acquisition has played a major role in Lemare’s growth, with the purchase of Cheslakee Logging in 1992, followed by the 1998 purchase of Tribune Timber, a Western Forest Products contractor. “Tribune’s contract had been moved to the Mahata River area, where we were already operating for Canfor and Weyerhaeuser, so it involved consolidating our work over there,” says Eric. During that decade, Lemare transported 300,000 cubic metres of spruce and cedar annually across the Island on behalf of Western, as well as built 40 kilometres of road.

Eric notes, “Logging is a very detail oriented business. To be successful you have to be extremely hands on. You also have to recognize that your clients need to generate a margin. This means consistently delivering a quality product at a fair price while making sure that everyone on your crew stays safe and goes home at the end of the day.”

Although Lemare is a full-phase market logging contractor with in-house RPFs and forest technicians, the company also offers professional forestry services on a contract basis – again, to provide much-needed consistency to employees and achieve corporate sustainability. “Forestry planning, roadbuilding, harvesting and marketing logs for clients are all services that help us mitigate risk,” says Eric, adding that utilizing the company’s resources in this fashion can be tricky: on one hand if a certain market or client suffers a slowdown, Lemare simply refocuses on other markets and clients, while on the other, during times when the industry is running flat-out (which many pundits predict will happen in B.C. over the next five years) intense planning is required to deploy manpower and equipment in a way that leaves no client shortchanged.

All this may lead an observer to conclude that Eric and Chris are office-bound, arranging when and where to dispatch their resources. In fact, both men spend most of their time in the field, the former presiding over logging operations and the latter supervising roadbuilding – which means a lot of pick-up truck driving, a lot of flying and travelling by boat. Not surprisingly, the brothers have experienced their fair share of adventure and tend to cite their work on East Creek and East Seymour as two of their more memorable projects. “Although East Creek happened 13 years ago it’s still vivid in my mind because it was a real engineering and roadbuilding feat,” says Eric. We couldn’t come in directly through the coast; instead, we had to come in from the back by climbing our way to the top of the valley, at which point we worked our way down, falling about 300,000 cubic metres in truly horrible weather.”

The East Seymour project was a First Nations joint venture that took place in 2008. “That was when we put our roadbuilding units and other equipment on a barge and blasted the rock face to establish a beachhead,” Eric recalls. “It was a process of drilling a section of rock and setting a charge, getting back in the barge and detonating the charge, and using our excavator to clear the rock away. We repeated the process until we had enough room to unload one machine, blasted and cleared some more, unloaded another machine, and so on. It took us a full week just to unload.”

After a pause, he notes, “Not a lot of companies are doing remote camp work anymore, mainly because it’s an expensive way to log. Our remote work is part of our overall services; we’ve always had a mainstay of logging in areas that are far more economical for our clients.”

As Eric and Chris move further into middle age, neither is thrilled by the prospect of spending long months away from home. “However, we’re about to start a year’s worth of offshore work for Interfor in the Broughton Archipelago,” says Eric.

The future for the Dutcyviches will consist of doing what they do best: maintaining flexibility and taking advantage of new opportunities. “By the time Chris and I are in our 50s, we would like to drive as much certainty into our business as possible, have a strong balance sheet and our debt at a reasonable level, with more diversification and less dependence on pure contract harvesting,” says Eric. “That means growing the brokerage and custom cut side of the business and keeping an eye on fibre tenure opportunities. It also means growing the construction side of Lemare.”

What about when Eric turns 60? “Will we become a third-generation family business? There’s not a lot of multi-generational success in forestry – but anything’s possible. Given our drive to diversify, we may even be known as the construction specialists who used to be loggers.”