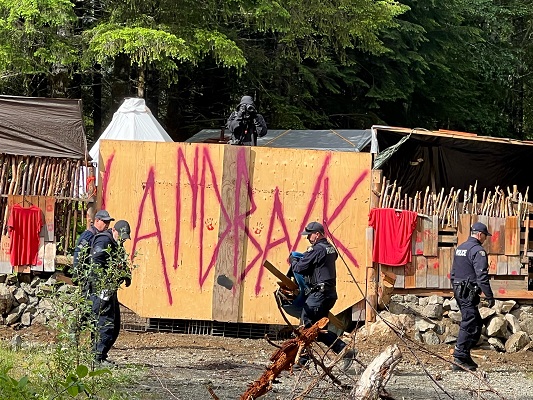 Police officers at the entrance of the protest camp on the forestry road. Photo: RCMP.

The RCMP said they arrested five people as they removed a protest camp on Vancouver Island that’s blocking access to a forestry operation near Lake Cowichan on June 29.

“After weeks of discussions with the Indigenous leaders from Ditidaht, Huu-ay-aht and Pacheedaht Nations, the RCMP attended the Haddon Main and Carrmanah Mainline Forest Service Roads near Lake Cowichan on June 29, to remove the protest camp and blockade that was re-established there in early June,” the RCMP said in a statement. 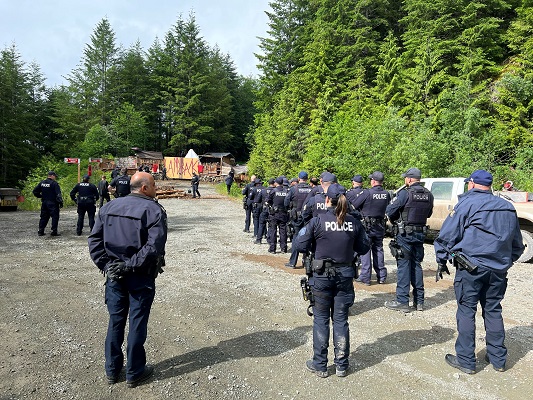 Police officers forming outside the protest camp on the forestry road. Photo: RCMP.

Police said the impacted First Nations communities had made several unsuccessful but peaceful attempts over the past several months to have the group dismantle their camp and vacate the area to allow the lawful forest operations to resume.

Earlier this month, Indigenous leaders from the Ditidaht, Huu-ay-aht and Pacheedaht First Nations met with protesters to give final notice to immediately dismantle an illegal camp built across a main logging road on Ditidaht traditional territory.

The police enforcement began at approximately 8:30 a.m. when officers from the Community-Industry Enforcement Group’s Quick Response Team (C-IRG QRT) encountered the group of protesters who were encamped on the forestry road. They were advised that enforcement will commence, and officers worked on dismantling the structures of the blockade after taking individuals into police custody. 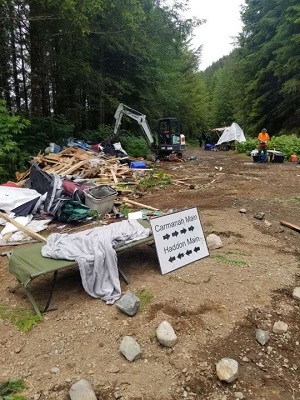 Piles of garbage and debris that required proper and safe disposal. Photo: RCMP.

The RCMP said there was a large amount of garbage and debris located within the encampment, as well as some flammable (gasoline) and dangerous materials that required proper and safe disposal. The Ministry of Forests have been engaged and are making arrangements to remove the piles of debris, the RCMP added.

“Once again, similar to other protest camps set up in the area over the last year, our officers had to haul massive amounts of garbage, debris and harmful chemicals from this encampment,” said Chief Superintendent John Brewer. The environmental damage to the grounds they have caused is appalling and that “interfering with the lawful use and enjoyment of property is a criminal offence and impeding access to the forestry roads is a clear violation of the court-ordered injunction granted to Teal-Cedar Products Ltd.,” Brewer added.

Four women and a man were arrested for breaching the injunction order (contempt of court) granted to Teal-Cedar Products Ltd. All were taken to the Lake Cowichan RCMP Detachment for processing. Of those arrested, one of the women and the man refused to identify themselves, and two of the women are repeat offenders under charge — these four were held in police custody overnight to appear before the court for a bail hearing. 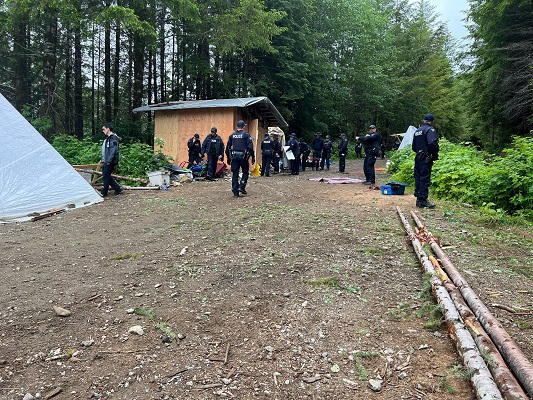 The Mounties said they maintained a police presence in the area and in the corridor, with regular patrols to ensure that the forestry roads remain unobstructed and accessible. Police said they will continue their roving patrols in the Fairy Creek Watershed area and its corridors to ensure that individuals are exercising their right to peaceful, lawful and safe protest within the terms set by the Supreme Court in the injunction.

“Access to the area near Haddon Main and Carrmanah Mainline Forest Service Roads will be limited only for the period of time required by police to clear the road of obstructions and arrest anyone in violation of the injunction,” the RCMP said in a news release.