Ric Singor is a typical custom sawmill owner. The independent sawmiller and partner in Muskoka Timbermills spends most of his time behind a desk handling wholesale marketing. Yet, he has a hands-on side, and prides himself in being able to run every piece of gear in the mill. The day CWP dropped in this past March, Singor was in work clothes, filling in for a vacationing foreman. Along with a flexible marketing approach, this flexible management style will serve Muskoka well through the current rough markets. 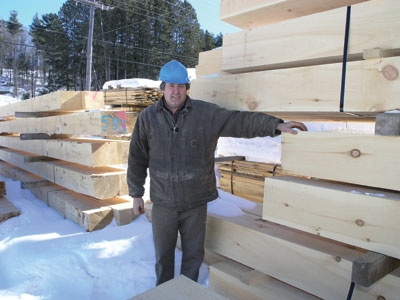 Ric Singor with some of the mill’s trademark squares Ric Singor is a typical custom sawmill owner. The independent sawmiller and partner in Muskoka Timbermills spends most of his time behind a desk handling wholes

You’ll find Muskoka Timbermills on a side road heading out of Bracebridge, ON, a town of 14,000 two hours north of Toronto. It looks more like a retail operation, and in fact Singor says the original business founded over a hundred years back was a rural big box store long before people even knew the concept. Singor, whose background is in dairy farming, took over the operation in 1991 because he and one of his partners saw potential in the local market for heavy timbers. Today the company sells far more, and like most area mills, Muskoka saws a mix of white pine and maple, but also dabbles in red oak, cherry, birch, red pine, hemlock, spruce and others as required. Still, Singor says the main claim to fame remains those large timbers. 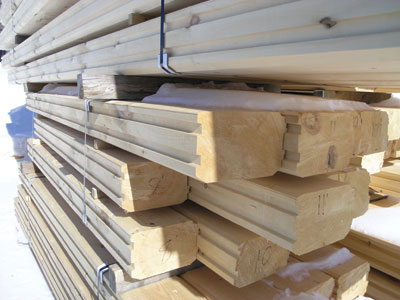 “A big part of what we do is big squares,” he explains while touring the yard and stopping in front of some gorgeous profiled squares for a timber home building client. Square, profiled, or dimension lumber, almost all production is made to order in a custom cutting mill with lots of flexibility, and thus limited automation.

“We don’t plane anything until we’ve sold it, and even in the sawmill we run mostly with orders in mind. It’s part of what we do – It’s custom made for the customer.”

Such customers range from the local cottager looking for a special run to match an extension to the original 1930s lumber, to the bulk of the production which is sold through wholesalers.

“The cottager needed only a few thousand boardfeet of the kind and size of lumber that just isn’t made this century, and it was priced accordingly. The hardwood is sold mostly through a half dozen wholesalers, and then we do everything in between.”

Hands-on Milling
Producing this range starts with sorting in the yard, with softwood and hardwoods piled separately, and kept under water from May to Thanksgiving via a recirculating irrigation system. Muskoka started off as a softwood producer, but Singor says they added hardwood to keep busy outside of the building season. In 2006 the mill cut almost 50% hardwood, although by the winter of 2007, this market was shrinking rapidly as domestic and US furniture manufacturers suffered under cheap Asian imports. When CWP was on site, Muskoka was very cautious in its hardwood log buying, relying instead on its Crown timber supply.

Debarking is via a Rosserhead on the big wood, and a ring debarker for the smaller logs. Breakdown starts with a Cleerman slant carriage and double-cut bandsaw running Uddeholm steel. The carriage was added and upgraded to Silvatech optimization for taper and opening face five years ago. From here, production flows to either a Morbark gang or a McDonough vertical band resaw for the boards. Trimming, grading, and sorting are manual. 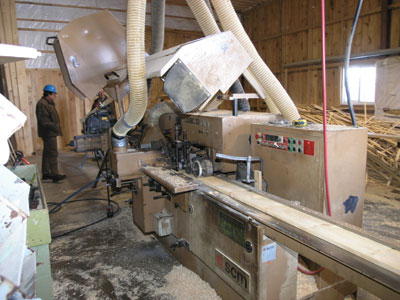 “It’s a traditional type mill, with a good bit of re-conditioned gear, but it has worked wonderfully for what we do. It’s actually our third kick at building a sawmill in our 16-year history. The first was a circular head rig and board edger. Then we opened it all up to put a bull and a circular resaw. Then about five years ago we put in a band headrig, band resaw, and the filing room to match.”

Lumber is sold as a mix of rough and planed, dry and green, with about 60 to 65% of the pine sold dressed. For drying, the mill runs four oil-fired 20-hp Nyle de-humidification kilns, but like many faced with rising power costs, they have an eye to efficiency here as well. To control costs, Muskoka stopped running its kilns during peak winter months starting in the winter of 2005-2006.

“First, in winter, you spend a lot of time and money bringing the temperature up while thawing lumber and melting ice. Second, in winter the price of heating oil jumps up. Right now (March), it’s almost 90 cents/litre. It just doesn’t make sense to run the kilns from the end of December until mid March if you don’t have to. We just watch the weather, and run when it pays.”

Instead, the mill does a lot of air-drying, especially with its pine, to remove the free water prior to the kilns. “I like to let nature take care of a few things for us, so we spend less energy for stress relief at the end of the pine drying, we get straighter, better looking lumber, and the market for most of our pine is not great in January anyhow, so we’ve got time.”

Such patience is also being shown on the production side, where Singor is waiting for improved markets before investing in mill improvements. He’d like to move to some form of wood-fired system for energy, given stubbornly high energy costs. He also feels the return on a 3-D optimization system for the headrig is good, and says the manual trimmer is a bottleneck when production passes 25,000 bdft/shift, making an automated trimmer attractive.

“We’ve got lots of ways to spend money once the markets turn – That’s not the problem,” he adds with a smile.

Sawmill residuals are well spoken for, including bark and yard waste, as Muskoka runs a Morbark tub grinder to process and colour mulch for the local landscaping market.

Overall production capacity is 6 million bdft on a single shift, five days per week, with a total of 25 employees. That level puts a special challenge on marketing, Singor admits.

“There’s a lot of competition for the big suppliers and big box stores, and we just can’t compete there. We have a core group of about three dozen repeat clients we serve, plus the special orders, and that’s our focus. The trick today is finding new markets when others, like the softwood export market or hardwood furniture market, dry up.”

As in the past, the path will likely take them to filling needs that few others can meet, but the challenge is not new.

“We started in 1991 in the depth of the last slump,” Singor recalls with a smile. “But like a lot of people, we forgot the pain. Now we remember,” he concludes as we walk past some massive timber on the way back to the office. With luck and imagination, this custom business will survive through another bout of amnesia.