March 26, 2018 - My first impression of Fornebu Lumber Company’s single sawmill in northern New Brunswick was awe at its log yard. Heading up the driveway, the mill itself is hidden behind several mountainous decks of 8- and 9-foot sawlogs. 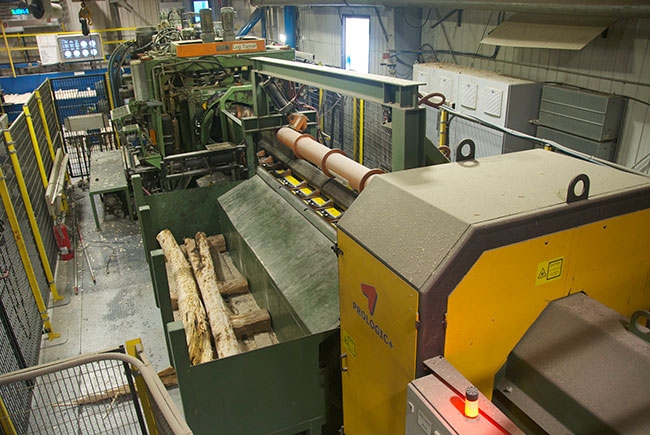 The mill produces about 100 mmbf per year of spruce and fir. Fornebu’s unique sorting configuration allows it to 100 per cent batch feed its sawline

Two bright green Sennebogen 830 material handlers zip along the rows, stopping occasionally to load and unload trailers, extending their booms to reach the top of the decks.

Log supply, it appears, is a strength for the lumber company, but it’s the unseen changes the company has undergone in the past several years that are truly inspiring. General manager Michael Godin says a series of employee culture shifts and capital projects have allowed the mill to dramatically improve its recovery. Just four years ago the mill consumed 4.28 cubic metres to produce 1,000 board feet and today that number is down to 3.6 cubic metres.

The entire recovery project — a two-year undertaking — was done internally. “We are very lucky. We have a very strong, good team. We hit a lot of challenges but we just hit them one by one and then we had our resolution,” Godin says.

In 2009 Fornebu Lumber was purchased by Umoe Group, a privately owned Norwegian company with stakes in shipping and energy, real estate, as well as restaurants around the world. But Fornebu operates almost entirely independent from its owners; mill management are still making the key investment decisions.

The bountiful sawlog supply I witnessed is thanks to Fornebu’s forest management business, which is run out of nearby Miramichi. Roughly 16,600 hectares of company owned forest, and a further 945,000 hectares of managed Crown forest feed the mill spruce and fir.

Fornebu cuts approximately 212,000 bdft per shift and in total produces about 100 mmbf per year.  Around 80 per cent of their production heads to the U.S., while the remainder is split between domestic and overseas markets.

Built in 1974, the mill was a fixture in the pulp industry under various pulp and paper owners before being purchased by Umoe Group in 2009. Under Umoe the mill’s focus shifted from producing mainly chips to dimension lumber. Before any equipment investments could be made, employees needed to shift their mindset, Godin explains.

“We held a lot of team events to talk about recovery and to explain how recovery affects our business. When we started the project — around 2012 — the price of the wood was pretty low. We had to explain why we needed to stay competitive for the future.”

Instead of sending a piece of 2×4 to the chipper, employees were encouraged to find ways to save it — a simple idea but a new concept for former pulp company employees. “At the end of the day that made a huge difference,” Godin says. “Today we are just one sawmill so the only chance we have to add more value to our product is to produce lumber.”

The next step of the recovery project was to readjust the equipment specs, sawing patterns, scanning, etc., to maximize the quality of the products. Some employees undertook training to better operate the Prologic+ and Autolog scanners in place throughout the mill. Next they evaluated the planer and a middle grade product was added.

“We started with the log yard and we finished at the planer mill. We really did the full loop with one objective — to have a better recovery. It’s easy to have a resolution when everybody is pushing in the same direction,” Godin says.

With the employees on board to maximize recovery, Fornebu began looking at capital projects to increase production. Over the past five years the company has invested $12 million in equipment in the log yard, the mill and the planer.

In 2013 Fornebu invested in a Sennebogen 830 M-HD S log handler, which features stabilizers and an impressive 45-foot reach — perfect for stacking stems to maximize Fornebu’s log yard. Godin was so impressed with the machine’s performance he purchased another the following year, this time an 830 mobile trailer to shuttle fibre to the log deck.

“There is less electronics on them and they are more user-friendly. And they are strong machines so you can put a larger grapple on it — that’s what sold the machine for us,” Godin says.

In the mill new chipping equipment from USNR was purchased in 2015, including a chip screen. Last year they installed a new dust collection system by Concept Air. The system, which cost about $250,000, spans the entire sawmill.

“The dust collection was for health and safety of employees. The more dust we remove from the air the better is for staff. It’s working well and we see the difference with little dust on the railings and on the machines,” Godin says.

Batch flow
Fornebu’s unique sorting configuration allows it to 100 per cent batch feed its sawline, which results in feed speeds of up to 700 feet per minute. In 2012 Fornebu held the record for the world’s fastest HewSaw. (www.woodbusiness.ca/sawmilling/maritime-missile)

Sorting first happens in the woods. Roughly 20 contractors for Fornebu divide cut-to-length logs in large and small sorts — large is 7–13 inch and small is 4–7 inch.

The mill will run either large or small logs for weeks before changing. Two log infeeds funnel the stems into the mill and lead to Nicolson A5 debarkers. Prologic+ log scanners then scan for defects and sort into seven decks.

“Because we have the seven decks and we sort in the bush, we have every chance to save the maximum we can. We can close the gap and speed the line. When you adjust your machine it will pass 80 to 100 logs before it will switch again. We gain a lot of efficiency because of that,” Godin says.

The sawline is an R200 HewSaw equipped with edging tool that was installed in 2010. Lumber then passes through an Autolog scanner and is treated to a Carbotech trimmer and a 39-bin drop sorter. The conveyors and long handling equipment are supplied by Hollins Industries, based in 100 Mile House, B.C. A Carbotech stacker and Samuel strapper round out the mill before lumber heads to the kilns and planer. Once planed the spruce and fir processed at the mill are shipped out as 2x4s, 2x6s, and 1x4s.

The mill produces about 100 mmbf per year of spruce and fir. Fornebu’s unique sorting configuration allows it to 100 per cent batch feed its sawline

which results in feed speeds of up to 700 feet per minute.

Safety culture
In 2012 Fornebu received a mandate from its owners to improve their safety record. Godin selected safety-veteran Christian Fournier to run the effort to improve safety at the mill and to shift the culture. Fournier established monthly training sessions on everything from lockout to how to use a ladder safely. All staff members are required to take part in the meetings  even Godin.

Fournier also runs safety challenges on a monthly and yearly basis to keep safety top of mind. “All together if employees win everything they can it’s $188,000 a year for the mill. That’s what we are willing to do to show our employees that safety is first,” Fournier says.

“Safety doesn’t start from the floor, it is top down. Everybody will follow, but they need a leader to show them that we are ready to make a change and invest in safety,” Godin says.

As of print Fornebu had gone more than two and a half years without a lost-time injury.

Future
The future of Fornebu will continue to involve key investments to remain competitive in the challenging Atlantic Canada lumber market, Godin says. This year they will be looking at installing a biomass burner for their six dry kilns that currently run on propane. The burner will be fuelled 100 per cent by bark from the mill.

“Bark is always a problem to sell and it’s the lowest priced product we have. If we can burn it we will turn the lower product into a revenue,” Godin says.

Several pieces at the planer mill are also scheduled for upgrades this year, including the trimmer, drop sorter and stacker. The planer mill was built in 1974 and much of it is the original equipment, including the A20 Yate planer. But as they’ve learned with their previous capital projects, it’s the employee buy-in that will make them successful lumber producers.

“You can invest all the money you want, but if you don’t have a good culture and good team work you aren’t going to have any success with any new equipment,” Godin says. “We need to make sure all our people are on board before we start to invest money.”