June 23, 3014 - Driving east of the nation’s capital to the Larose Forest, it is difficult to picture that the land on which it stands was one considered to be a desert.

The over 26,000-acre forest sits atop the Prescott-Russell sand plains, approximately 60km west of Ottawa, where clear-cutting for shipbuilding and agricultural land devastated the area of its natural forestation by the mid-19th century. When it was realized that the land was too sandy for crop growth, an ambitious plan in the 1920s worked to restore the land to its natural forestation.

The first 40 hectares that were planted were red pine. Subsequent tree planting across the next 50 years included white pine and white spruce, along with more red pine. Some deciduous trees like poplar and birch were eventually added into the mix. Today, Larose Forest is the second-largest planted forest in southern Ontario.

In 2000, the United Counties of Prescott-Russell took over management of the Larose Forest from the Ontario Ministry of Natural Resources. One year later, they released a strategic plan for the forest to help manage growth and maximize natural and historical elements of the forest.

Managing the forest
Heideman Forest Services in Eganville, Ont., located 190km northwest of the Larose Forest, had already been logging in the Larose Forest for 15 years prior to the takeover by Prescott-Russell. Heideman established a market for red pine in the early 1990s that allowed plantation owners in eastern Ontario and Quebec to profit from thinning their stand.

The company has developed a market for red pine in the landscaping and housing business. Much of the red pine processed by the Heideman Forest Products sawmill outside of Eganville is used to create 4x4 and 6x6 timber for fencing and decking, along with other uses inside and outside the home.

The company employs two logging teams trained specifically to tackle the challenges of harvesting red pine in thinning operations, using versatile machines to reach through the dense stand without damaging remaining trees. Each harvester and forwarder team works in the Larose Forest as well as on private plantations in the region. All trees are made cut-to-length onsite and then trucked to the Heideman sawmill.

On the cold February day that Canadian Forest Industries joined the Heideman logging crews in the region, the crews were thinning two sections of the Larose Forest as well as cleaning up a private thinning job in the same area. The minus 20° temperature and three feet of snow made for ideal cutting conditions in the forest, which can have drainage and mud issues when the ground is not frozen.

On the first site, near the southeast corner of the forest, a Valmet harvester was thinning red pine alongside a primary concession road. The Valmet 911C with 960 Valmet head is a single grip harvester that features a Cummins 5.9L engine. The 911C was built in Michigan for the North American market in the mid-1990s.

At the second site, a forwarder was finishing a red pine thinning operation northeast of the Larose Forest. The Puma forwarder, with Kesla 600 arm and Hultdins SuperGrip grapple, is a product of Norco Equipment Co. in Wisconsin. The 12-ton six-wheel Puma 612 forwarder was introduced by Norco in July of 2010, and has now been re-branded as the Barko 612, featuring the same 197hp Volvo engine – following Barko Hydraulics’ purchase of Norco Equipment in May of 2012.

The forwarder was competing with snowy terrain with tire ruts 3 to 4 feet below the accumulated snow. Thanks to the cutting and stacking pattern used by the harvester, the forwarder had easy access to piles that provided no obstacles for getting to the wood to bring it to roadside for pick-up.

In the northeast section of the Larose Forest, a harvester was working in tandem with a skidder. The Timberjack 460D TC skidder was pulling tree-length logs to a loading area where the contractor was preparing them for shipment to the mill in Eganville. Further into the forest, a Tigercat 822C harvester with Quadco 5660 processing head did the thinning work.

Challenging Conditions
Cutting at the end of February means that the crews are nearing the end of the logging season in eastern Ontario, causing a need to increase the pace of the operation. A growing number of restrictions, warnings and conditions have reduced the logging season significantly the past several years.

“Every year there seems to be a new restriction put in place that is very difficult to understand and to react to,” says Ed Heideman, owner of Heideman Forest Services.

Restrictions have been introduced to prevent logging at certain times of year, in most cases spring and fall months.

“Some of the species of trees, white pine and red pine in particular, have to be handled very carefully during the summer months.”

With spring, summer and fall all out of the question, most of the logging is restricted to the winter months of December, January and February.

“The Endangered Species Act is possibly the biggest danger to the industry right now,” says Heideman. “It has the potential to be harder on the industry than the recession was.” 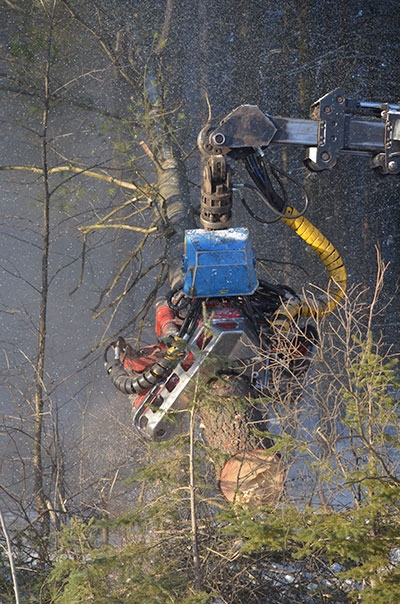 With dense stands and little room to manoevre Heideman established a market for red pine in the early 1990s that allowed plantation owners in eastern Ontario and Quebec to profit from thinning their stand.
Print this page