In good times and bad, the owners of WKO, Inc. in Carson, Wash. have reinvested in their operations. This past downturn has been no exception and despite the recent tough times facing the forest industry, they have heavily invested in new equipment that will keep them at the forefront of the U.S. Pacific Northwest industry. 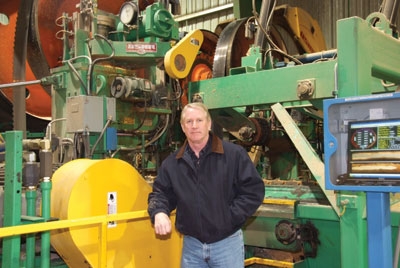 “Year after year we have invested in the company, which has brought it to the competitive operation it is today,” explains Bill Wilkins, the president of WKO, which stands for Wilkins, Kaiser and Olsen. “Our willingness to reinvest our earnings over the years in modernization projects has been the key to our success. We have put between $1 million and $2 million back into the mill every year since 1980, and I have even had some of our employees ask why are we spending money when times are tough. My answer has always been the same – ‘don’t worry when you see us spending money, worry when you don’t.’”

With that bit of advice from Wilkins, the company’s workforce shouldn’t have any concerns right now. The planer mill has seen some significant upgrades over the past 12 months, most of which were designed and engineered to help it keep pace with the sawmill, which saw a significant increase in production in 2008 with the installation of a new USNR double length infeed with Porter Engineering automated scanning technology.

“Like many other sawmills, we have had to continuously look at our operations and find ways to improve recovery, unit costs and productivity,” Wilkins says. “It’s a continuous learning cycle, but at the end of the day, I have to say we are running better now than we ever have. The double length infeed has been the biggest factor in our improvements and we are running better now on one shift than we did on two with our old tilted carriage and small log sharp chain system.”

Wilkins says the double length infeed project was in the works for some time. “We looked at it three times and as far back as 2000,” he notes. “We finally made the decision to go ahead in 2007 and did the installation in the first half of 2008. It was a large project for us as we had to essentially cut the mill in half and then tie it back together again. We removed a tremendous amount of equipment as we really replaced two primary breakdowns with this one project.”

Time for the Planer 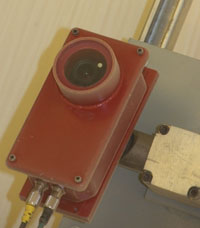 With the new double length infeed completed and the mill back up and running in June 2008, Wilkins says they quickly realized the pressure was on for a significant planer upgrade project if they wanted to keep the planer production running hour for hour with the sawmill. That included the installation of a new USNR-Coastal planer infeed and bridge, a used USNR planer and two USNR MillTrak systems. “We had to do a significant amount of work to bring the planer mill speed up to the sawmill,” he explains. “The first thing we did was install the two MillTrak systems. We saw MillTrak for the first time while we were looking at other equipment on a new mill tour in Oregon. We were impressed with what MillTrak could do, so we decided to order two of them for ourselves.” 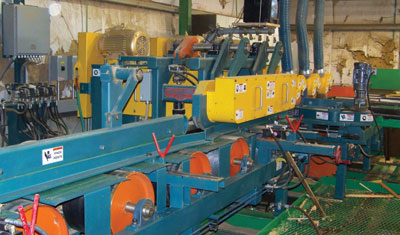 MillTrak is a vision-based material flow management system designed to maximize efficiency by replacing multiple photo eyes and proximity sensors. The MillTrak vision sensor is positioned above the production flow where it is less susceptible to dust and moisture, which reduces maintenance. It can recognize the presence or absence of materials in the detection area as well as the width, length and skew of the material. According to USNR, one MillTrak system can replace up to 100 conventional photo eyes with a cost-effective and simple installation.

At the Carson mill, one of the new MillTrak systems was installed at the planer infeed, while the second one is located downstream at the lug loader that feeds the trimmer. “It’s a really good piece of hardware,” says Wilkins. “And it works very well with our in-house designed PLC. It has given us a fully automated planer infeed and has allowed us to move the planer operator 30 feet upstream, which allows him to do other things, like turn and trim boards.”

Wilkins adds that the planer operates on variable speeds and with MillTrak in place they have a more consistent backlog at the planer infeed. That’s also the case at the lug loader. “Lug loader performance is dependent on a proper and consistent backlog as that will provide you with the correct percentage of filled lugs,” he explains. “If the backlog is right, the percentage of filled lugs is right.”

The used planer WKO purchased is a 2001 USNR model with electric drive and 24 knives. Although Wilkins is happy with what they have achieved to date, he adds they are not done yet. “The new USNR-Coastal planer infeed and bridge along with the used USNR planer are performing to our expectations,” he notes. “However, the line is capable of 3,000 FPM and at this time we are only operating at up to 2,400 FPM. Between now and the end of this year, we are adding a new USNR-Newnes revolver lug loader, a USNR paddle fence, a USNR smart tipple and a used 38-bin PHL bin sorter. Once completed, we expect to be able to take full advantage of the planer line speed capability. The new infeed and bridge have also allowed us to slow the ratio between the planer speed and the infeed speed with the boards matching up end to end at a much slower speed. This really helps minimize breakups in the planer.”

The company has a long history in the U.S. Pacific Northwest and was started by Bill’s father, Bill Wilkins Sr., and Joel Olsen. They began as high lead loggers in 1962 before building the company’s first production facility in Carson in 1966, which was a 4-ft. veneer mill. In 1972 they added the sawmill when they acquired a chip ‘n’ saw, and then in 1976 they installed a quad band breakdown line. In 1980 they installed an Albany head rig, which is still operational today, and then in 1998 they built a new planer mill and dry kilns in Carson. Today, the Carson site, which is about an hour and 15 minutes east of Portland, Ore., is home to the two-line sawmill and planer complex and High Cascade, which is a veneer plant. The company also owns Mt. Hood Forest Products, which is a green lumber production facility across the Columbia River and just east of Carson in Hood River, Ore.

The Carson mill runs smaller logs (under 24 inches in diameter) through the double length infeed line, while large logs are directed to the headrig line. Both lines are fed with a Barco 550 hydraulic loader, which distributes logs between two debarkers – a Nicholson A5 (35-inch) and a Nicholson A1 (60-inch). The small line can receive logs from both debarkers, while the larger headrig only receives logs from the A1 debarker.

The USNR double length infeed line features USNR modules with Iggesund Tools’ Powerheads, a 6-ft. quad band mill and a 6-ft. twin horizontal, both manufactured by L&B (now USNR). The line has three edgers – an optimized 6-inch gang edger and an optimized board edger, which were both manufactured by Sherman (now USNR) and a 12-inch Ukiah double arbour combination edger. All boards from the small line end up at a Newnes trimmer optimizer, which is followed by a Newnes 60-bin J-bar sorter and a Newnes stacker.

The headrig line features an Albany 60-inch carriage and an Albany 84-inch bandmill, a Ukiah combination edger, a 36-inch Salem pony carriage double cut and a 5-ft. single resaw. Finished products go to either the 60-bin sorter or a green chain.

Any product from the sawmill that is going to be dried is sent to one of four 104-ft. double track Wellons steam powered dry kilns, all of which are powered by a Wellons 55,000-lb.-per-hour wood fired boiler.

Next in the process for any product that is not being shipped rough is the planer mill, which features the new infeed and bridge and the recently acquired used planer. The planer line has the new USNR MillTrak sensors along with Autolog linear planer optimization with profile and knot grading capability (profile and vision scanning). As mentioned earlier, the planer will be further updated later this year with new trimming, sorting, and loading equipment from USNR and PHL. Following the planer, most lumber goes through a Signode semi-automated packaging station with manual paper wrapping and is then put into inventory prior to shipment, which is by truck and rail. The site doesn’t have a rail spur, so rail shipments are trucked to a reload facility, which is located about four miles from Carson.

Between the two lines at Carson, the mill can produce 2×4 to 2×12 and timbers in any dimension. They run about 50% Douglas fir, 45% white fir or hemlock, and about 5% pine. High Cascade Veneer and Mt. Hood Forest Products both run 100% Douglas fir, Wilkins says, so which facility the fir goes to depends on market conditions. Right now, all three plants operate on one shift, although the Carson sawmill has historically operated on two shifts.

According to Wilkins, the biggest challenge the company faces right now is log supply. They currently source logs from state and federal timber sales along with open market logs from private landowners. “Sawmills don’t go broke by running out of logs,” he says. “They go broke by paying too much for them. Right now, with the uncertainty of the log market and the uncertainty of the lumber market, the best strategy for us is to stabilize our costs on a one-shift basis and run as steadily as we can.”

With the latest round of upgrades just finished and more to come later this year, it seems to be a strategy WKO has embraced wholeheartedly. “The mills left running today are very efficient and with our upgrades in place and our policy of reinvesting in the business, we plan to remain one of them,” Wilkins concludes.