The average annual production at the remanufacturing facility was approximately 15 million bdft., but there was room for improvement. So the company shut down operations for four months in 2015 (from May to August) and upgraded the facility’s entire production line. The result was a huge increase in production and a diversification of its product offerings.

Upgrades to the mill included a new Gilbert infeed and planer, an Innotech Canada stacker, a Novilco lug loader and a VAB lineal grading system, upgraded software for its FEI Wellons kilns, and upgrades done to the mill’s current trimmer. The price tag for the project, including new infrastructure, installation and equipment totalled approximately $5 million. The main driver behind the investment was efficiency.

“We also had ample supply for production and we have the markets, so it all just made sense,” Sibley says.

With the new upgrades running at full capacity, production is expected to more than triple at the mill, going from about 15 million bdft. annually to about 50 million bdft.

While the mill was still in start-up mode, fine-tuning all the latest upgrades, it ran a single nine-hour shift until mid-November, when it moved to a shift-and-a-half, and then to two shifts at the start of 2016. The final goal is to produce 200,000 bdft. daily.

Most of the boards that MP Atlantic Wood remanufactures come from mills throughout Atlantic Canada.

“We source from all over the Maritimes,” Sibley says. “We have a good partnership with Irving, we get a big supply from them.”

The company also gets a good portion of its supply from Brunswick Valley Lumber in Fredericton, N.B.

“We get good support from them,” Sibley says.

The process
After lumber is loaded onto a 60-foot-long infeed by a JCB 940 forklift, it runs along a conveyor to a recently custom-built unscrambler, built by MP Atlantics Wood, to help the mill adjust to its new production levels.

“Everything has to be changed when you want to go to a higher production,” Sibley says. “A lot of the time, the infeed at a mill will be 100-feet long because you have to have time between the lifts. So in order for us to compensate [so the mill doesn’t run out of wood from one bundle to another], I put an unscrambler in place so I can put about a half a bundle of lumber into it while the bundles are changing, so there’s a continuous load for the infeed.”

The lumber then moves via an Atelier Fabrication RY Inc. feeder to a Gilbert infeed and then over to a Gilbert planer. It then goes through a new VAB lineal autograder system.

“A VAB moisture meter measures the moisture in every piece going through the planer,” Sibley adds.

The upgrade to a VAB lineal autograder system was vital so the facility would have automatic grading.

“I have consistency in my grades now so I can maximize recovery in my lumber,” Sibley says.

He says VAB’s customer service has been unbelievable.

“Their technicians just drop by to see if everything is working OK and see if anything needs to be tweaked,” Sibley says. “They do random calls, you don’t see that a lot. They really support their equipment.”

After boards exit the VAB lineal autograder, they travel through an Innotech Canada slowdown belt over to the newly installed Novilco lug loader, which can operate at speeds upwards of 350 lugs per minute.

“It’s great how smooth this thing goes,” Sibley says. “We’re currently operating at about 95 lugs per minute. But we have the capability to go three times that speed, no problem.”

From there it moves through an older Technologic trimmer, which has been upgraded over the years, down a conveyor and either moves over to an Innotech stacker system or over to a manual sorting line.

“The primary product we produce goes to stacker, and the secondary product – the trims – go to the manual sorting line,” Sibley says.

Drying upgrades
The company runs two high-pressure steam FEI Wellons kilns for its lumber drying operations. The company recently upgraded the kilns with FEI Wellons software. The investment is expected to increase efficiencies within the kilns by between 20 and 25 per cent.

Sibley says the drying schedules for the operation are very straightforward.

The drying schedules have been optimized so the change times are within an hour from the time the kiln is done to the time it’s changed, 24 hours a day.

“With the planer mill producing more every day, every minute counts,” Sibley says.

Self-sufficient
No residuals at MP Atlantic Wood go to waste. All of the trim ends currently run through a hog and are sent to a boiler to dry lumber.

“By using the kiln-dried ends, our boiler became much more efficient,” Sibley says.

The company was previously burning green sawdust, so the efficiency in its boiler has gone up at least two-fold, according to Sibley.

“Now we’re burning half the fuel and getting good pressure in your boiler all the time,” he says. “When you’re burning green sawdust, 50 per cent of the sawdust you’re burning is going to pre-drying and heating up sawdust to make the heat to dry your lumber.”

Expanding operations
MP Atlantic Wood has plans to expand its operation and is currently building a 50,000-sq.-ft. finger joint line on the mill’s property.

“It’s a work in progress but the building is up and hopefully we’ll have it running by late spring or early summer in 2016,” Sibley says.

The company had originally planned for the facility to be built sooner, but the unusually harsh winter experienced in most of New Brunswick last year created delays in construction.

As part of the new facility’s construction, the company plans on installing a second Gilbert planer for its finger joint operation.

“The support I get from Gilbert has been great,” Sibley says.

The plan for the new facility is to produce another 50 million bdft. of finger joint stock.

“It will complement the existing operation,” Sibley explains. “Not only is it going to utilize a lot of the low grade and shorts out of my operation, but also a lot of shorts from local mills. It will help create a local market and aid the mills with their own efficiencies.”

With production more than tripling in the near future, and another operation soon to be up and running, MP Atlantic Wood should continue to thrive in Dieppe, keeping the company competitive for the long haul while creating much-needed jobs for people in the Moncton area. 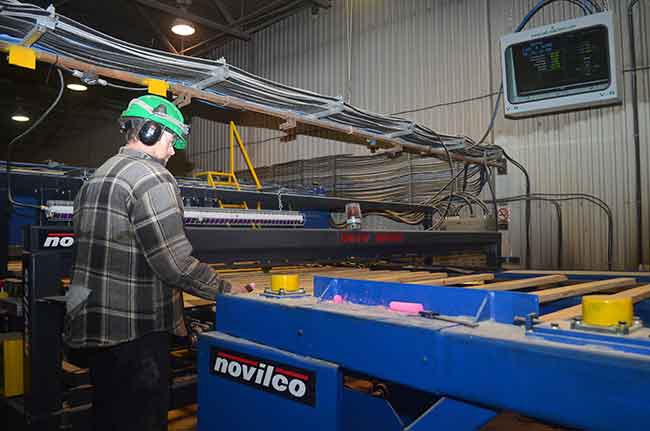