San Group has been pouring millions of dollars into creating a tight ecosystem in Port Alberni, B.C., to keep costs for the business and the environment down and make the best use of every log they can get their hands on. 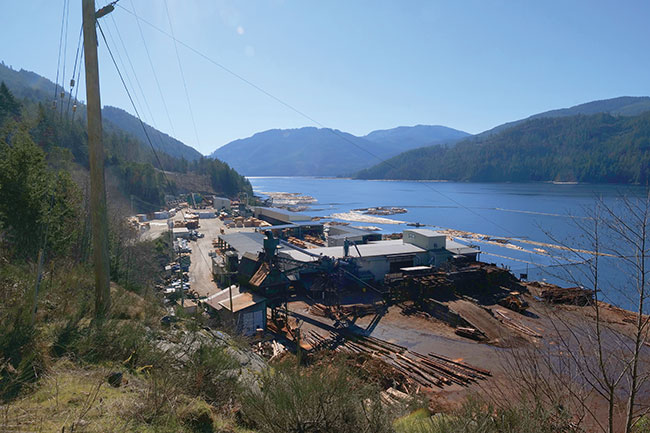 The large-diameter Coulson mill, purchased by San Group in 2017, now has a small-diameter HewSaw R200 line in a new building that can process logs down to three inches in diameter. Photos: Annex Business Media.

The provincial government looks to defer up to 26,000 square kilometres of old-growth forest, redistribute timber harvesting rights to First Nations and communities, and give government greater oversight with a view to making the province “the landlord of the forests again.”

All the while, the government is looking to the value-added sector to drive the industry forward, while cracking down on log exporters.

The irony of this, according to the industry, is that remanufacturers depend on high-value old-growth logs. Some feel the government simply does not understand the forest industry.

Following much doom and gloom at the annual Truck Loggers Association conference, Canadian Forest Industries visited one of the most forward-looking value-added forestry companies in the province – San Group – in February to find out how they are reacting to this paradigm shift.

“It’s going to impact us in a very big way,” San Group’s CEO Kamal Sanghera says of the old-growth deferrals, while noting that they are looking for clarity from the government on its direction. “We’re looking for what the government’s definition of value-added is.”

For several years, San Group has been pouring millions of dollars (approximately $200 million by this point) into creating a tight ecosystem in Port Alberni. With the purchase and expansion of the Coulson mill, the creation of a remanufacturing facility, an agreement with the Catalyst paper mill next door to purchase pulp logs while providing waste fibre for hog fuel, a deep-water port, and now a biomass facility in the works to turn shavings and sawdust into pellets, San Group plans to do it all within a handful of kilometres.

This is all to keep costs for the business and the environment down, says Sanghera, and making the best use of every log they can get their hands on. “We use less to create more – this is the philosophy that is working here,” he says. 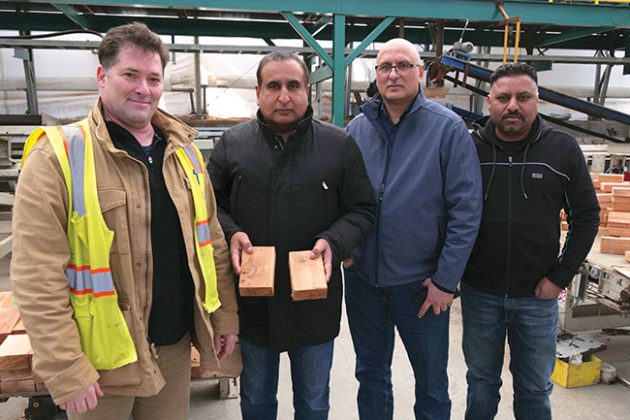 This is achieved in many ways, including with major changes to what had been a large-diameter mill at Coulson, but which now processes every available tree species down to a 12-inch diameter; adding a HewSaw R200 line that can process lower-grade timber down to three inches in diameter (now in production); a Fezer Slicer, supplied by Quebec’s Industrial Machinery Sales, at the reman facility to make veneers with little waste; creating engineered products with high-value veneers atop low-grade wood cores, and more.

Giving an example as we walk through the reman facility, Sanghera points to some clear 6×6 old-growth lumber. You could get about six pieces of siding or other product out of one 6×6 normally, he says. But by slicing it into veneer and using lower-grade wood for the core, San Group gets 48 to 50 pieces.

Achieving San Group’s vision requires a dependence on cutting-edge technology (literally and figuratively), bringing in computer scanning and automation with tools like their Microtec Goldeneye 502 Quality Scanner to add speed and precision to their operation. Unfortunately, pandemic-induced supply issues mean the reman facility has been awaiting some components for months, leaving staff to run machinery manually. 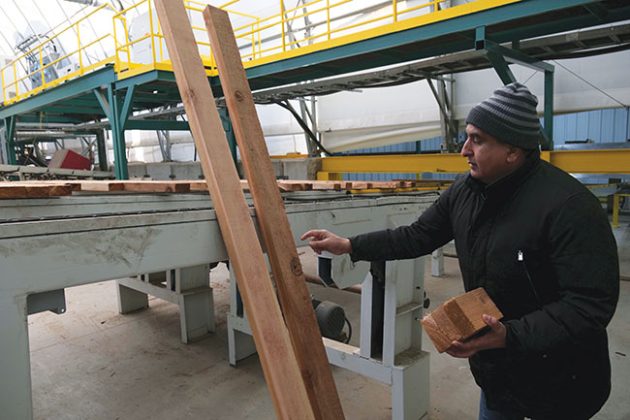 Those issues combined with an industrial fire in April 2020 in which San Group lost their Conception finger jointer (now replaced with a Western Pneumatic finger jointer) have caused some frustration. But Sanghera says the company is in good spirits as far as their Port Alberni project goes, with their reman facility currently at about 70 per cent capacity with 80 staff. They are looking to increase to 105 staff at full production. The Coulson mill’s new small log line has one shift now fully running, with aspirations for a second shift as fibre is secured.

Overall, the company expects their Port Alberni operations to be an example of best practice in the maximum use of available fibre while achieving a low-carbon footprint. And, though not yet quite fully realized, it’s a feat they hope to replicate elsewhere.

“Honestly, what the San Group has done, they are defining a lot of what the modernization policy speaks to,” says Kevin Somerville, vice-president of operations on Vancouver Island. “We are re-defining what value-added means to the coast, and how it should be defined.”

But the question is whether San Group’s redefinition fits with what the government is looking for. That is a question the company is looking to answer.

As far as the government’s decisions relating to old-growth, some amount of it will always be needed, he says.

“We depend on a very small fraction of old-growth,” Sanghera says. “But we have to have some in order to make other components out of the low grade.”

Despite this reduced dependency, Sanghera says “the sword is hanging on our head, too,” with Somerville adding that exactly how much old-growth fibre has been removed from the harvest remains difficult to know.

While San Group is committed to getting the most out of every log (their stance on waste is that no amount of waste is acceptable), Sanghera says they believe in a working forest where second and third growth has the opportunity to grow into old-growth, rather than being over-harvested to maintain existing old-growth.

While that may sound in contrast to some of the government’s recent decisions, San Group said it sees positives in the direction the government seems to be going, and notes there may be some opportunities as well.

Currently, San Group has about a year of fibre supply built up, but after that, supply becomes a question as they hold no licences, Sanghera says.

However, with the redistribution of timber harvesting rights, San Group is looking at prospective partnerships with local First Nations and communities to secure a consistent fibre supply. Greater certainty in their fibre supply would of course be a major boon to the business.

And, while others have decried this tenure redistribution to smaller players as a loss in efficiency, San Group begs to differ.

It’s more efficient, Somerville notes, to mill logs and manufacture products in the regional areas in which the trees are grown, rather than shipping logs to another country or to other parts of B.C.

It’s also more efficient to make use out of every available tree in a given cut-block, rather than selectively logging high-value trees from a single species and leaving the rest to become fuel for forest fires.

“I think with the system we’ve got in place, you can create the jobs, you can have the working forest, you can have something which is sustainable for a long time to come,” Sanghera says.

And, in San Group’s opinion, their system fits very well into what the B.C. government and British Columbians are calling for.

But only time will tell if the government’s vision will align with San Group’s re-definition.

Related
San Group, Seaton Forest Products partner to grow value-added BC manufacturing
Editorial: Is wood products business over in BC?
Why do we still log old-growth? The answer is not in a 15-second sound bite
Atlas Engineered Products purchases Hi-Tec Industries