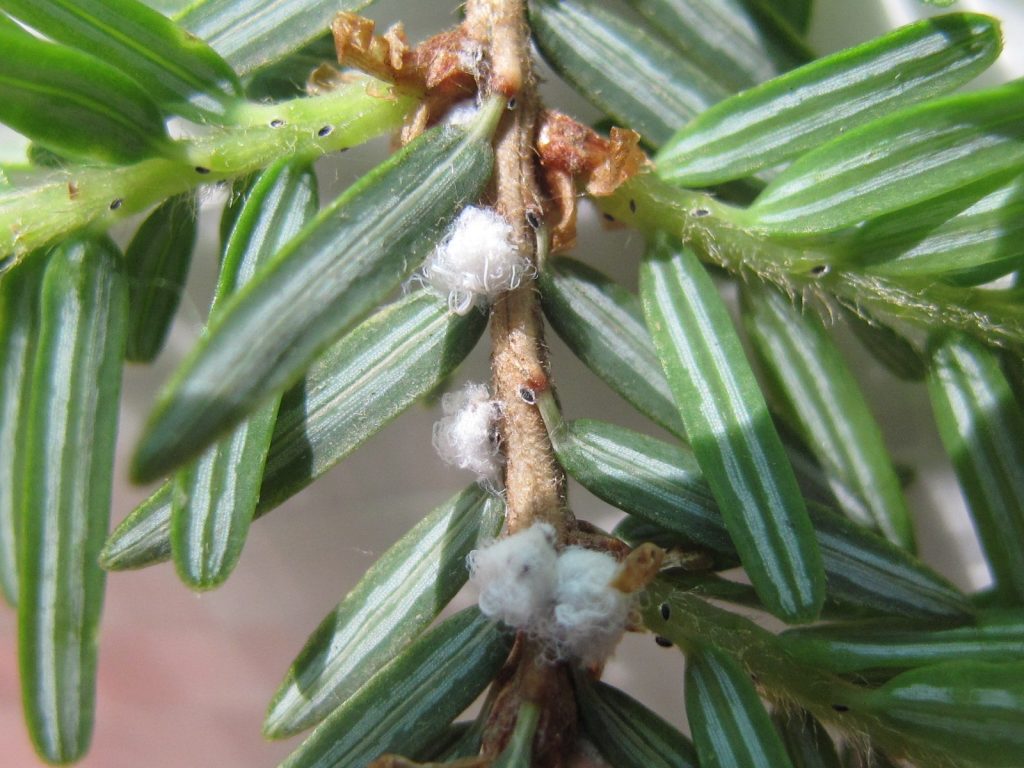 This summer, scientists from Natural Resources Canada’s Canadian Forest Service and student researchers from the University of Guelph found a large infestation of hemlock woolly adelgid (HWA) in Ontario that had gone undetected for some time.

The researchers were originally collecting data to create an inventory of hemlock trees in the province to understand the risk that HWA might pose to the trees in southern Ontario. But the group discovered the large number of HWA, a serious invasive forest pest originally from Japan that has killed hemlock forests across the eastern United States since the 1970s.

The tiny, aphid-like insect is about the size of a grain of pepper and covers itself in a white wool. It kills the tree by sucking the sap at the base of needles, draining the tree of its energy. It can spread on infested nursery stock or on the wind, but often hitchhikes on birds which then introduce it to new areas. 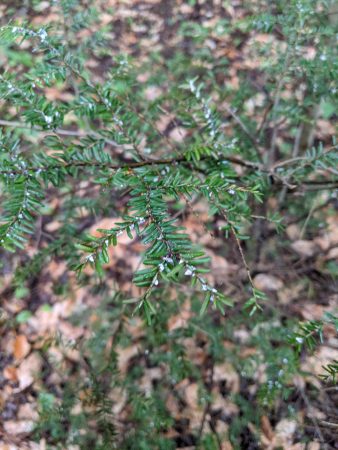 In Canada, it was found in Toronto in 2012 and in the Niagara Gorge in 2013, both of which seem to have been eradicated. The only known population in the province was an isolated forest in the Niagara region that was not connected to other forests. The bug was also found in southern Nova Scotia in 2017, causing significant mortality to old-growth hemlock forests.

This summer’s discovery is worrisome, since the bug was found far from other known populations and close to forests with large amounts of hemlock.

In the Cobourg area of Ontario, the Canadian Forest Service crew saw large numbers of the insect as well as many dead hemlock trees, suggesting the bug has likely been present in that area for many years and may have spread beyond the known infestation. This discovery gives the Canadian Food Inspection Agency and others the chance to manage the infestation to reduce its impact and spread.

According to the researchers, finding HWA near Cobourg is a big jump from where it’s known to be in Niagara, and very close to where there is a lot of hemlock in Ontario. It’s not as bad as what they are seeing in Nova Scotia, but it’s concerning based on how close this is to a large number of hemlock trees. 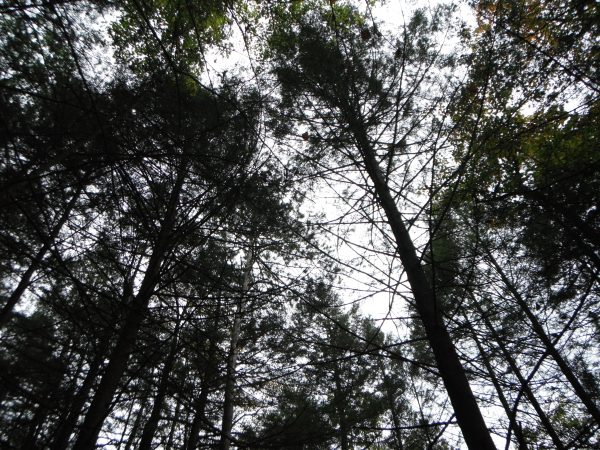 Cobourg’s hemlock forests are part of a contiguous forest that stretches to the Kawartha Lakes and Muskoka regions. This means that cottagers and landowners with large stands of old-growth hemlocks are at risk of having the insect spreading there. Hemlocks have ecological and cultural value and make up many of the trees in this region. Hemlock stands are commonly used by white-tailed deer as wintering yards because the tree canopy intercepts the snow, making it easier for deer to travel their trails.

To slow the effects of HWA, the Canadian Forest Service is collaborating closely with partners including Parks Canada, the Canadian Food Inspection Agency, the provincial governments of Ontario and Nova Scotia, University of Guelph, Ontario Nature, the Niagara Peninsula Conservation Authority and Canada’s Invasive Species Centre. Research is being conducted on tools such as siviculture (culling and replanting trees), biological control (using other bugs) and insecticides.