February 25, 2016 - It can take Mother Nature 1,000 years to grow a forest. But Nikolay Strigul, assistant professor of mathematics and statistics at Washington State University Vancouver, can grow one on a computer in three weeks.

He and Jean Lienard, a mathematics postdoctoral researcher, created the first computer simulation that grows realistic forests down to the branches, leaves and roots of individual trees. They are using the simulation, detailed in a new paper in Royal Society Open Science, to determine how drought, warmer weather, more frequent wildfires and other climate-related changes will affect forests across North America.

They have already used the computer model to predict increases in fire rates and plant growth in Quebec hardwood forests due to rising CO2 levels and warmer temperatures.

“We call our model LES after the Russian word for forest,” said Strigul, who grew up in Russia and came to the U.S. In 2001. “It is a tool that forest managers can use to create 3D representations of their own forests and simulate what will happen to them in the future.”

Intricate detail, adjustable scale
LES uses recent advances in computing power to grow 100×100-metre stands of drought and shade tolerant trees that can then be scaled up to actual forest size.

The model is unique in several ways. First, it is the only forest-growing simulator that creates intricate root systems and canopy structures for each tree. Previous forest simulators could either grow one or the other.

Below ground, the roots of different trees in LES compete for water resources in each pixel of the model. Above ground, the leaves in each tree’s canopy compete for sunlight in a similar fashion. Over time, the trees’ canopies change shape to expose their leaves to more sunlight.

Drone images, 3D models
The researchers use a combination of data from the U.S. Department of Agriculture’s Forest Inventory and Analysis Program and other forestry databases, as well as aerial reconnaissance from UAVs, to customize their model to particular forests. The simulator lets scientists project how changing climate conditions will impact forests over thousands of years.

“In cooperation with the U.S. Forest Service, we developed a method where we fly drones around a forest and take pictures and gather other imaging information,” Lienard said. “We use this data to develop 3D models that have real distributions of space and ecological features.

“Details of our drone work were recently published in PLOS One and Measurement,” he said. “It is a method that can be adapted for practically any forest.”

The effects of a changing climate
For large parts of North America, climate change is leading to more frequent drought, warmer weather and other varying natural conditions. What effect this will have on forests and their ability to recover from dynamic disturbances like wildfires or clear-cutting is difficult to determine.

Scientists know relatively little about the mechanics that drive forest recovery. The process can take several decades to document and involves trees with diverse physiological characteristics competing for resources over large and ecologically varied areas.

Strigul and Lienard plan to use LES to help forest managers determine which species of trees and other ecological factors are necessary for forests to reestablish themselves after being destroyed by wildfires and other disturbances.

“Drive an hour east along the Columbia River from Vancouver and you will notice a complete transition from very dense forests to savanna and then to desert,” Strigul said. “The fear is that drier conditions in the future will prevent forests in places like Washington from reestablishing themselves after a clear-cut or wildfire. This could lead to increasing amounts of once-forested areas converted to desert.

“Our model can help predict if forests are at risk of desertification or other climate change-related processes and identify what can be done to conserve these systems.”

The research was partially supported by a grant from the Simons Foundation and a WSU New Faculty SEED grant.

The paper can be found at http://rsos.royalsocietypublishing.org/content/3/2/150589. 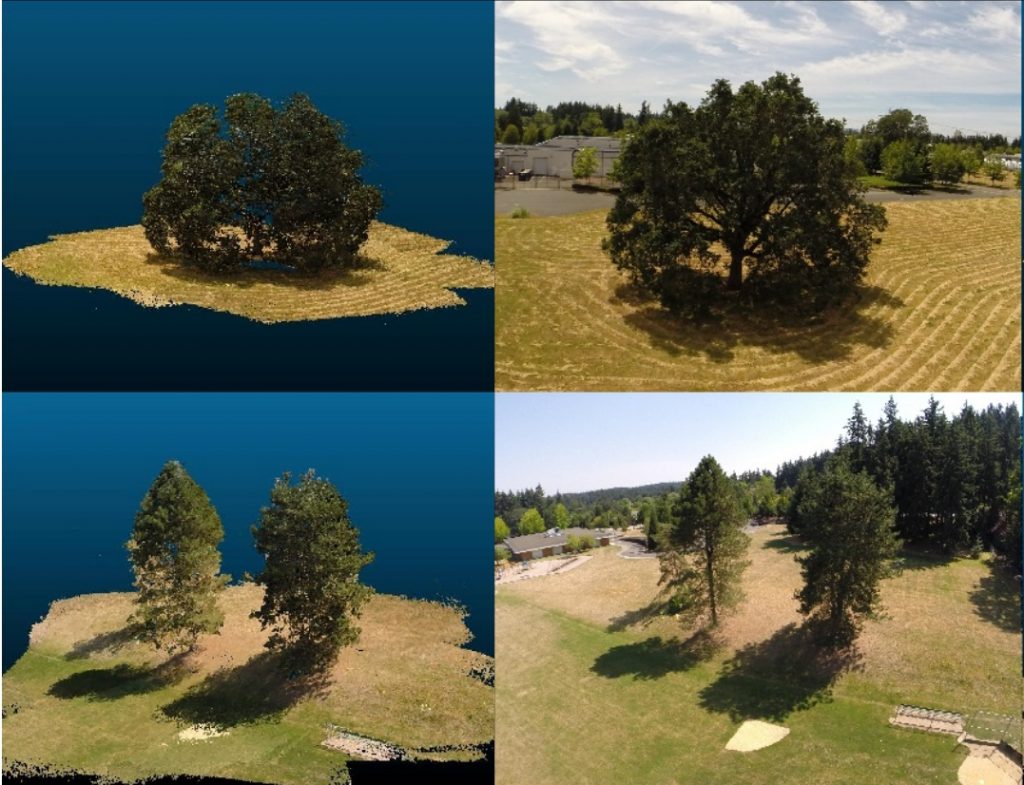 Real trees are on the right. Trees on the left were made using imaging data collected by aerial drones and the LES forest simulator.
Print this page