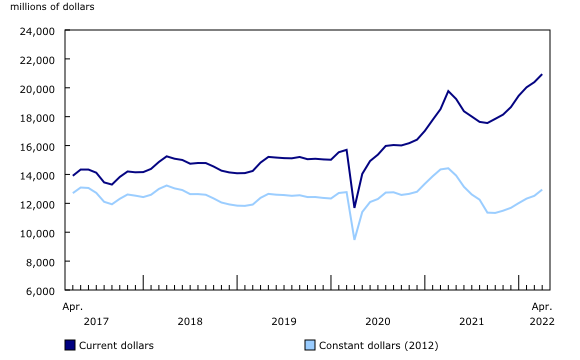 Investment in building construction in Canada increased by 2.7 per cent to $20.9 billion in April. Gains were reported in both the residential (+3.2 per cent) and the non-residential sectors (+1.4 per cent).

Residential construction investment rose for a seventh consecutive month, up 3.2 per cent to $15.7 billion in April. British Columbia (+8.3 per cent) led the way and reached a record high.

Investment in single family homes increased 4.5 per cent to $8.8 billion, with gains in seven provinces. Conversely, Saskatchewan reported the largest decrease in investment (-12.5 per cent), after being up six of the seven previous months.

Multi-unit construction investment advanced 1.5 per cent to $6.9 billion, with British Columbia behind much of the component’s advance.

Investment in the non-residential construction sector advanced 1.4 per cent in April, with seven provinces posting increases.

Investment in industrial construction increased 1.7 per cent to $931 million, with Ontario accounting for most of the net growth.

Commercial investment advanced 1.5 per cent to $2.9 billion. Nine provinces reported growth, with a notable retail project in Vancouver contributing significantly to the month.

Institutional investment rose 1.0 per cent to $1.4 billion, its fourth consecutive monthly advance. Growth was led by Quebec, with a federal building in Shawinigan designed for the Canada Revenue Agency and Employment and Social Development Canada.