Jan. 2, 2017 - It's been less than two years since Resolute's newest sawmill in northwestern Ontario opened for business following an accelerated 13-month build. 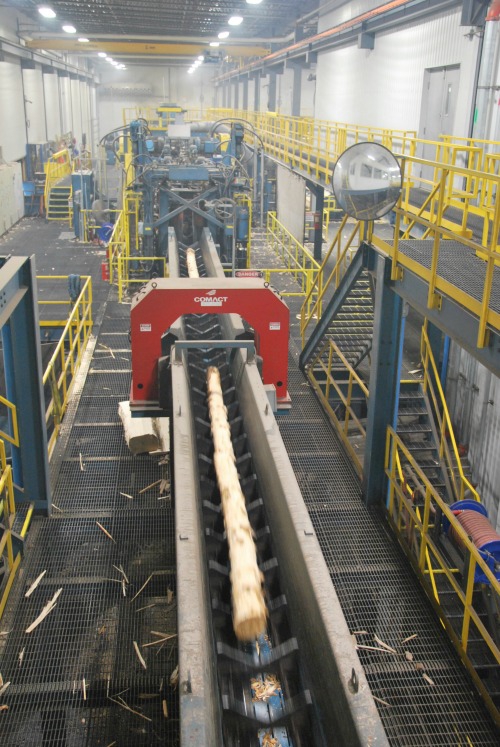 Situated a half-hour drive east of the small town of Atikokan, 200 kilometres northwest of Thunder Bay, the sawmill began lumber production in the summer of 2015. The chosen site was a former Buchanan Forest Products’ AFP mill, but Resolute began fresh by levelling out a new portion of land to accommodate a larger operation where sawmill and planer mill are housed under one roof.

The new mill was the most significant element to an almost $100 million sawmill investment plan by Resolute in northwest Ontario. Resolute is the largest forest products company in Eastern Canada. The company has several other operations in the area, including a pulp mill, paper mill, cogeneration plant, sawmill and a pellet mill in Thunder Bay, and a recently reopened sawmill in Ignace – 250 kilometres northwest of Thunder Bay.

Much of Atikokan’s sawline equipment was brought over from Resolute’s former Oak Hill sawmill in Nova Scotia, which closed in 2012. Built in a brand-new 220 foot by 40 foot building, the mill is a single-line 16-foot sawline that is almost entirely supplied by Comact, including the new TBL-3 curve sawing gang edger with a 10-inch arbour, which allows them to produce 2×3 2×4 2×6 and 2×10 boards.

On the planer side, which runs under the same roof as the sawmill, Resolute purchased new a complete high-speed planer line, which was supplied entirely by USNR save for a Comact GradExpert scanner. The planer mill opened in April 2015 a few months before the sawmill was up and running. The planer also receives wood from Resolute’s Ignace 9-foot stud lumber sawmill 165 kilometres north of Atikokan.

Atikokan’s 2016 production output fell short of its 150 mbft target. “We’re encouraged by our steady progression in log counts per shift, but we’re not where we need to be,” says Michael Martel, vice-president of forest products operations for Resolute in Ontario and Quebec. “The ramp up is longer than anticipated, primarily due to challenges around the availability of people and logs.”

Resolute is facing those challenges by forging partnerships with nearby municipal and First Nations communities, and working closely with logging contractors who face similar employment shortages.

“We’re taking a more hands-on approach to connecting the potential labour force with the [logging contractors], recognizing that they have a variety of skills and limited time – these are very busy entrepreneurs – to be able to dedicate to that,” Martel says.

Look for a full mill profile in an upcoming issue of Canadian Forest Industries.

Touring the @resolutefp Atikokan sawmill today – lots of new equipment to see. Here’s one in the filing room. pic.twitter.com/oGuhhAxL38