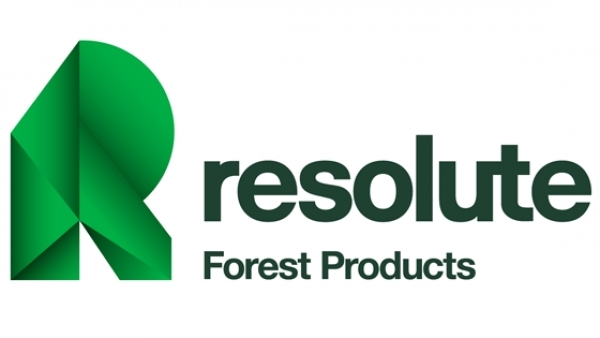 “Overall positive price momentum and improved operational performance led to record profitability this quarter. Our strong financial results allowed repayment of $105 million of debt during the quarter, significantly improving our balance sheet and leverage,” said Yves Laflamme, president and chief executive officer. “We are also very pleased that the countervailing duty order on supercalendered paper has recently been revoked, resulting in a $60 million refund of duty deposits over the coming months.”

A new four-year collective agreement was also ratified, shortly after the end of the second quarter, with the company’s largest Canadian union, Unifor, covering 1,000 employees at six of its sawmills. Earlier in the year, Resolute reached a new four-year collective agreement covering 1,100 employees at eight of the company’s Canadian pulp and paper mills.

Non-GAAP financial measures, such as adjustments for special items and adjusted EBITDA, are explained and reconciled below.

Operating Income Variance Against Prior Period

Consolidated
The company recorded operating income of $121 million in the quarter, compared to $48 million in the first quarter of 2018. The $73 million improvement reflects higher prices realized across almost all of our product offerings ($58 million), a reduction in energy costs, largely seasonal, favorable fiber usage, and higher shipments following distribution constraints in the first quarter. The operating results also benefited from the effect of the weaker Canadian dollar. These favorable elements more than compensated for the 20 per cent increase in market-based stumpage fees and a rise in recovered paper prices. Maintenance and labor costs were also higher this quarter, largely related to the scheduled outages at two of our pulp mills.

Market Pulp
Operating income in the market pulp segment was $41 million, $8 million higher than the first quarter. Positive pulp price momentum continued in the quarter, resulting in a $37 increase in the average transaction price to $747 per metric ton. While productivity improved at most mills, shipments were down 9,000 metric tons, largely due to scheduled maintenance outages at the Catawba (South Carolina) and Calhoun (Tennessee) mills, as well as the planned inventory buildup at Saint-Félicien (Quebec), ahead of the extended outage required for the previously announced strategic investment. As a result, inventory increased by 17,000 metric tons. The operating cost per unit (the “delivered cost”) increased by $12 per metric ton due to planned maintenance outages and higher recovered paper prices, offset in part by lower wood and fuel expenses, mostly stemming from improved efficiency. Pricing gains outweighed lower volumes and higher costs, resulting in EBITDA of $49 million in the quarter, or $137 per metric ton, up from $110 per metric ton in the first quarter.

Tissue
The tissue segment incurred an operating loss of $10 million, compared to $1 million in the first quarter, largely attributable to the first time inclusion of Calhoun’s results in the second quarter. When compared to the previous quarter, Calhoun’s operating results improved by $3 million, mainly due to an increase in shipments. If Calhoun’s first quarter sales, previously recorded as a reduction of start-up costs, were included in the tissue segment, overall tissue sales would have risen by five per cent, as product mix shifted favorably towards more converted product volume. Finished goods inventory decreased by 3,000 short tons. The delivered cost remains elevated as we continue to optimize productivity. EBITDA for the segment was negative $5 million.

Wood Products
Compared to the first quarter, operating income in the wood products segment improved by $26 million, to $79 million. The increase is almost entirely attributable to the rise in average transaction price, up $55 to $514 per thousand board feet, as new highs were reached for most grades during the quarter. Shipments also increased by 39 million board feet as a result of improvements in rail car availability. Finished goods inventory dropped by nine per cent to 128 million board feet. Despite better fiber recovery, the delivered cost rose by $13 per thousand board feet to $355 due to higher market-based stumpage fees linked to lumber selling prices, a rise in diesel fuel cost, and an increase in maintenance activity. EBITDA for the segment was $86 million, compared to $61 million in the first quarter, reflecting a margin of 34 per cent.

Newsprint
At $18 million in the second quarter, newsprint generated $22 million more operating income compared to the first quarter. Sales rose by 16 per cent as the average transaction price improved by $26 per metric ton and shipments increased by 38,000 metric tons to 393,000, following freight constraints and timing of export sales in the first quarter. Finished goods inventory at the end of the quarter was 8,000 metric tons lower, at 85,000. The delivered cost also improved by $30 per metric ton, largely due to higher volumes and a seasonal reduction in energy costs, offset in part by higher planned maintenance. EBITDA improved by $54 per metric ton from the previous quarter, reaching $88 per metric ton, or $35 million.

Consolidated Quarterly Operating Income Variance Against Year-Ago Period
The company’s operating income improved by $169 million, compared to the second quarter of 2017. The favorable pricing environment across almost all of our products added $145 million to our results compared to 2017, as the average transaction price increased by 33 per cent for wood products, 18 per cent for market pulp, 15 per cent for newsprint and eight per cent for specialty papers. The improvement in operating income also included the elimination of fixed costs due to capacity closures in our paper segments ($20 million) in 2017. In addition, there were no significant closure and other related charges in the quarter, compared to $65 million in the same quarter of 2017.

These favorable items were partially offset by an increase in manufacturing costs ($26 million), mainly resulting from scheduled maintenance and higher market-related fiber costs, a 15 per cent rise in freight expenses ($16 million), and the unfavorable impact of the stronger Canadian dollar ($15 million).

Following the revocation of the countervailing duty order on supercalendered paper by the U.S. Department of Commerce, all of the $60 million of cash deposits previously paid will be returned with interest. Including $67 millionfor softwood lumber and $6 million for uncoated groundwood papers, cumulative duty deposits of $133 million are recorded on our balance sheet.

Outlook
“Our view on pulp markets remain optimistic through the third quarter, as supply and demand dynamics are expected to be strong in most markets. Despite extensive pulp downtime related to the major capital project in Saint-Félicien, which will increase pulp production in the long term, we expect our pulp performance to remain solid. We believe the underlying market fundamentals for lumber will support healthy operating results in the medium term, in spite of a recent pull back in lumber prices. Paper markets are expected to remain favorable in the third quarter, as we continue to benefit from rising prices across our product offering. For tissue, we have made progress in increasing sales and market penetration. Our operations are now focused on supporting our strengthening market position,” Laflamme said.

Resolute Forest Products is a global leader in the forest products industry with a diverse range of products, including market pulp, tissue, wood products, newsprint and specialty papers, which are marketed in close to 70 countries. The company owns or operates some 40 manufacturing facilities, as well as power generation assets, in the United Statesand Canada. Resolute has third-party certified 100% of its managed woodlands to internationally recognized sustainable forest management standards. The shares of Resolute Forest Products trade under the stock symbol RFP on both the New York Stock Exchange and the Toronto Stock Exchange.