Aug. 11, 2017 - The mill in Ignace, Ont., an almost three-hour drive northwest of Thunder Bay, is more than just a modern sawmill. For the town of about 1,200, Resolute Forest Products is one of its biggest employers. 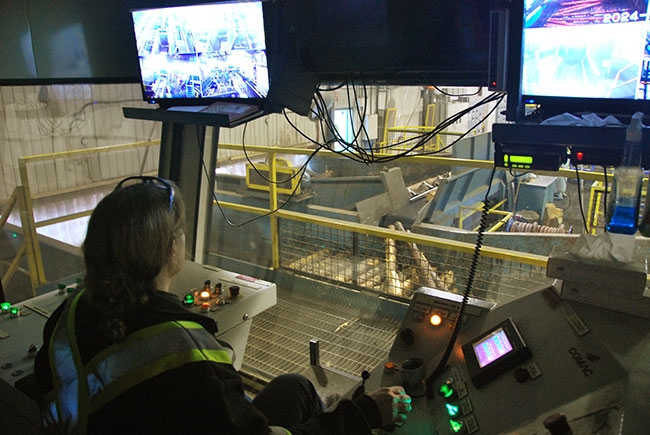 It’s easy to imagine there were cheers when Resolute reopened the 9-foot stud mill in early 2015. But the former AbitibiBowater mill’s restart was not without challenges, some of which are unique to the area and others are felt company and industry wide.

My drive up to see the mill during a snowstorm last November was a good illustration of one of its main challenges: its remote location. I started in Atikokan, Ont., – the location of Resolute’s newest sawmill – and drove 160 kilometres north up the 622 secondary road. It was a long haul for my little rental car. For prospective employees in, Thunder Bay, the commute is 246 kilometres on the Trans-Canada Highway.

“The biggest challenge for Ignace is finding people. Knowledge, including staff knowledge, is difficult to find,” says Michael Martel, vice-president of forest products operations for Resolute in Ontario and western Quebec.

Bowater (a predecessor to Resolute) purchased the independent sawmill in 2000 and had it up and running in 2004, but in 2006 the mill was idled in response to the U.S. softwood lumber quota. The mill had no historical shipments to the U.S. and so was left without a quota allocation when the last U.S.-Canada softwood lumber agreement was negotiated.

Almost 10 years later, Ignace officially reopened boasting $12 million in equipment upgrades to modernize the sawmill as well as the installation of new dry kilns. The mill is now targeted to produce 115 mmbf per year – a jump from its original output of 85 mmbf – and running three shifts for 63 staff and hourly employees.

Resolute is the largest forest products producer in Eastern Canada and including Ignace has several facilities in northwestern Ontario. Regional operations include a newly built sawmill in Atikokan (read about that mill in the May/June 2017 issue), an upgraded sawmill and new pellet plant on the land of the Fort William First Nation in Thunder Bay, as well as a pulp and paper mill and 65-megawatt cogeneration plant in Thunder Bay.

“We’re fully integrated right now. If you look at our regional operations, we make lumber at three facilities, we make pulp, we make paper, we make wood pellets and we produce power,” Martel says. “Green Energy is key to our company and the transition to use virtually 100 per cent of our sawmill residuals to produce thermal and electrical energy is a strategy that is at the core of Resolute’s drive to be at the forefront of carbon emissions reductions.”

Under the roof
Ignace is a small, single-line stud mill that produces 2×3, 2×4 and 2×6 in nine-foot lengths. The line begins with two log infeed decks that lead to two 17-inch Nicholson debarkers – installed for the mill restart – followed by new Comact C2 Scanners. The debarked logs are then grouped in four sort bins. From the bins the blocks are sent through another Comact C1scanner that determines the optimal sawing solution for the single-line Comact canter-quad, followed by a DDM-SB with an integrated optimized log turner.

The Comact C2 scanners are among the most recent equipment upgrades for the mill, one component of the $12 million investment by Resolute.

“We only have four log bins in Ignace, and we had very old scanning technology there so our accuracy in terms of sorting logs into bins was not great. We wanted to run three of the bins in pattern, or batch mode. These new scanners allow us to more accurately put enough into the proper bins which allows us to run faster when we’re in pattern mode, which improves our recovery,” Martel says.

Other recent installations include a Novilco strip or sticker placer and fuel-kiln handling upgrade supplied by Megadome. The Megadome upgrade shelters planer shavings that fuel brand-new Wellons direct-fired kilns that were commissioned as part of a Wellons turnkey project in 2015. Shavings are trucked in from Resolute’s planer in Atikokan and are kept dry and out of the wind in the Megadome shelter, a strategy that makes the kilns more efficient and keeps the site clean.

The Novilco strip system replaced a first-generation strip-placing machine that required frequent maintenance. “With many of our trades contracted out at Ignace, we found it was a very high-maintenance item – it took a full-time operator. We replaced that with this more reliable piece of equipment, which ended up eliminating the bottleneck,” Martel says.

Sawdust is then shipped to Resolute’s pellet plant adjacent to its sawmill at the Fort William First Nations operation in Thunder Bay. The pellet plant is a first for Resolute; it produces 45,000 tonnes each year, all of which is sent to Ontario Power Generation’s 100 per cent pellet-fuelled power facilities in Atikokan and Thunder Bay. Bark from Ignace is shipped to Resolute’s 65 megawatt combined heat and power facility in Thunder Bay.

Other upgrades to Ignace include new Comact C2 scanners

Fibre sourcing
Ignace is well positioned to receive fibre from Resolute’s timberlands in the area, all within about 200 kilometres of the mill. Its 10 logging contractors supply 450,000 cubic metres a year of mainly spruce and jack pine, as well as some balsam.

“The forests south of Ignace were under-harvested for a long period of time. We are now harvesting wood – primarily on the pine side – that is over-mature, and not of great quality due to rot, stain and large knots,” Martel says. “However, our grade out-turn continues to improve as we learn to extract value from this wood and we are on target thanks to the hard work of our quality and optimization team at Resolute.

“The wood quality challenges affect our production because you have logs breaking up in the machines, getting jammed and that sort of thing. We need to chew through that wood – it will pass but we have a few years of this,” he says.

When Ignace restarted in 2015, contractors were in short supply in northwestern Ontario. To help with the shortage Resolute recruited one of its top tier Quebec contractors to relocate to northwestern Ontario late last year. With enough fibre feeding the mill, Ignace was able to add a third shift at the mill in March this year.

Workforce
“Our biggest challenge here aside from wood is recruitment and retention,” ¬¬says Roxanne Van Tassel, human resource, health and safety co-ordinator for Ignace. “It’s hard to attract new people to come here and then to keep them. And for maintenance they have to be qualified trades people.”

The mill keeps its maintenance team staffed with a combination of apprentices, skilled local trades and fly-in-fly-out tradesmen from Quebec. “It’s a unique situation for the company but an absolute necessity given the regional shortage of skilled millwrights, electricians and process engineers,” Van Tassel says.

Resolute has made important strides in partnering with municipalities, trades schools and First Nations communities nearby to source employees, but that often means a significant investment in developing young, inexperienced people.

“We need to recognize that we have a very young workforce and that starts with our First Nations and non-Indigenous communities,” Van Tassel says.

Resolute recently participated in a program that will see First Nations apprentices graduate from the Industrial Mechanical Millwright Technician Program at Cambrian College in Sudbury, Ont. These graduates will then be hired at Resolute’s mills, including Ignace. So far three have graduated, and one was hired; the two others are making their way through the process.

“We are initiating another program this fall in partnership with Confederation College and Anishinabek Employment and Training Services in Thunder Bay for 10 new Aboriginal millwright students per year,” Martel says.

As with its mills in Thunder Bay and Atikokan, Ignace fully contracts out its mill yard work to Dallan Forestry, a 100 per cent First Nations-owned partnership between Lac des Mille Lacs First Nation, Nigigoonsiminikaaning First Nation and Dale Levesque, a member of the Fort William First Nation. Another First Nations company, Rainy Lake Logistics – a partnership between Gardewine Group and Boundary Waters Anishinaabeg Development Company – is contracted to haul all residuals and lumber.

For the 63 employees working in Ignace, Resolute’s determination to make its operations a success in northwestern Ontario, in spite of the challenges, has meant a steady job for the past two years. And so far the mill shows no signs of slowing down.