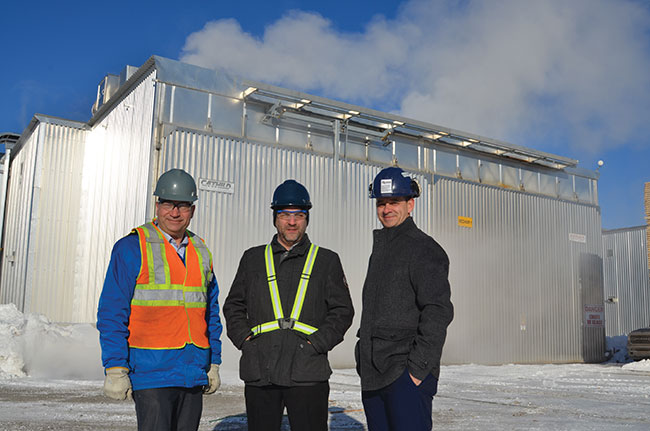 “Watching propane delivery trucks pass by each week used to drive me crazy!” jokes Benoit Girard, president of Scierie Girard, a sawmill based in Shipshaw, Que., which used to burn 2.4 million litres of the fuel each year.

But the company’s recent conversion from propane to an electric system to power its six dry kilns will make high fuel consumption levels a thing of the past, said Jonatan Julien, Quebec’s Minister of Energy and Natural Resources. In terms of the impact on greenhouse gas emissions, the conversion is the equivalent of eliminating 5,000 cars from Quebec’s roads each year.

Julien made the comments during a press conference last February, when the Quebec government announced a $2 million grant for the $3.5 million project as part of the ÉcoPerformance program, which is funded by the Fonds vert (Green Fund) and managed by Transition énergique Québec.

For its part, Hydro-Quebec kicked in $300,000 as part of its Programme Démonstration technologique et commericale (Technological and Commercial Demonstration Program), which facilitates the testing of new electrical applications.

For nearly a decade, Scierie Girard had been trying to convince Hydro-Quebec to offer a rebate for medium-volume customers who want to use the utility’s surplus power. That wish finally came true in April 2019, when the company became eligible for “Rate M” in Hydro Quebec’s pricing structure, a fixed levy of $3.73 /kWh.

However, Hydro-Quebec’s offer came with a major constraint: clients who took advantage of the rate are obliged to halt energy consumption during peak winter demand periods.

“We had to shut down our dryers for a total of about 25 hours this winter, broken down into short periods lasting about five hours each,” Girard explains. Although this slowed production, it was more than worth it because of the large overall savings the bundle provides.

“It costs us about $10 to dry a thousand board feet of wood,” he adds.

Better still, Hydro-Quebec offers stable pricing, unlike propane markets, which fluctuate wildly. For example, if the price of propane were to rise to $0.41 per litre, the sawmill could save as much as $1 million per year.

“I have never been so happy to pay my Hydro-Quebec bill,” Girard says, noting that he prefers to buy his energy locally from a Quebec crown corporation rather than send money to the oil giants.

When Hydro-Quebec runs out of surplus power, Scierie Girard’s business plan calls for the sawmill to opt for its “Rate L” pricing option, which would raise drying costs by five dollars per 1,000 board feet.

Switching to an electric system has also increased the quality and efficiency of Scierie Girard’s drying operations because the process is more uniform. It’s also faster – Girard estimates it now takes about 40 hours to dry pine, 60 hours for black spruce and 90 hours for fir.

Since Nov. 22, 2019, the dry kilns at Scierie Girard have been fully powered by the electric system. At the time, it was the largest installation of its kind in the world.

“The conversion was not necessarily needed from an economic standpoint,” Girard says. “However, the transition was important to us for environmental reasons. Wood is already regarded as a green product, but we wanted to make it greener.” 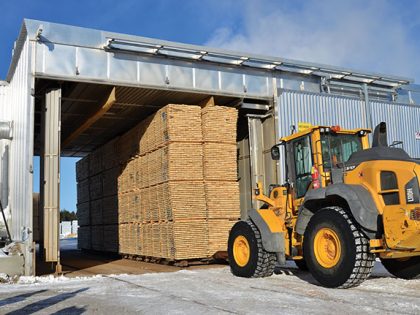 The electric-powered dry kilns eliminate the consumption of 2.4 million litres of propane per year. 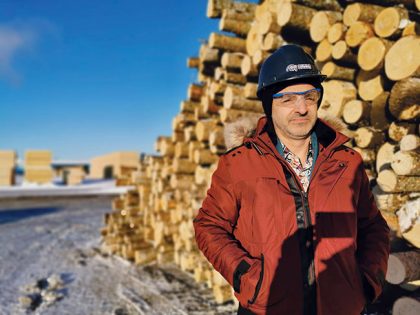 According to Benoit Girard, the conversion was not necessary for the proper functioning of the sawmill, but it makes the wood products even more green.

Modernization upgrades
The project caps a $17.5 million investment plan that began in 2017, which included the installation of a new HewSaw sawline and an optimizer from VAB Solutions.

“It is much better adapted to the kind of wood we need to saw,” he says, since Scierie Girard saws about 40 per cent balsam fir and 60 per cent black spruce and jack pine. The sawmill’s speed has also improved, reaching over 650 feet per minute.

The mill owner was also impressed by HewSaw’s service, describing it as “incredible.”

Now, the sawmill runs more than 11,000 logs per day, compared to 7,000 before this investment. The sawline is also equipped with Prologic’s Scan-n-set technology.

To increase production even more, Scierie Girard also invested in a VAB Solution Lumber Grading Optimizer, which improved the product value by increasing the amount of premium grade-lumber while reducing trim loss.

“We beat new records with this optimizer,” Girard says. “VAB has exceeded our expectations and our return on investment was very fast.

“We are not smarter than anybody else, but we like to be surrounded by smart people to make it work,” he adds.

The sawmill has a guaranteed supply of 175,000 m3 of wood annually and buys extra from government auctions and private land, for a total of 260,000 m3 per year.

Overcoming challenges
Despite the success of these modernization projects, powering dry kilns with electricity did have its challenges. Indeed, many in the industry doubted that Scierie Girard would see its plans through.

To meet his goals, Girard surrounded himself with a cutting-edge team comprised of top talent from Hydro-Quebec, Cathild (which manufactured the dryers), and Idéa Contrôle (an energy management consultancy firm).

For example, Scierie Girard’s six dryers each consume 1.2 MW of energy, generating a theoretical maximum demand of 7.2 MW. However, the project budgeted a maximum energy allocation of five MW for the initiative. Idéa Contrôle added a series of electrical load shedding systems that activate automatically during peak power consumption to remedy this problem. The systems complemented the company’s existing controllers.

“Not all factories want to be forced to run a thermal power plant,” Giroux says. “Electric drying reduces the work associated with maintaining a biomass-fueled boiler. You don’t have to deal with frozen bark and residue in the middle of winter; you can just sell it.”

Hydro-Quebec hopes to continue to unload excess capacity and reduce greenhouse gas emissions by convincing other sawmills to shift from propane and natural gas to electricity. At Scierie Girard, the cost of offsetting one tonne of CO­2 is $23 over 20 years, a low-cost option in Quebec.

This demonstration program is already bearing fruit for Hydro-Quebec.

Indeed, electric dryer projects have already emerged across Quebec since the spring, notably at Stella-Jones’ sawmill in Gatineau, Que., Scierie Saint-Michel and the Damabois factory in Cap-Chat, Que.

Officials from both Cathild and Idéa Contrôle agree that Quebec’s energy supply is big enough to supply local sawmills. The two companies recently put their money where their mouths are by announcing a partnership to help meet the projected demand.