In 2005, Ken Eldredge delivered a load of pack baskets to a customer in southern Maine. He left Corinth early to beat the morning rush hour traffic and arrived ahead of schedule. Eldredge decided to kill time in the pellet stove section of a nearby store, where he struck up a conversation with the owner and ended up missing his appointment. 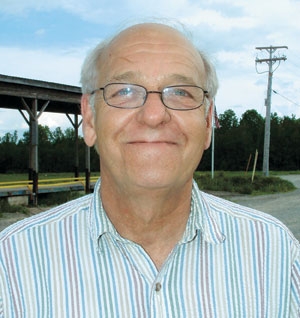 “I had heard of pellet fuel and pellet stoves, but I didn’t know much about them. They had one and it was putting off tremendous heat,” Eldredge recalls. That chance encounter ignited the 30-year basket manufacturer’s entrepreneurial engine. The 62-year-old businessman felt conditions were ripe for development of a pellet fuel plant in his hometown.

Worldwide, alternative energy sources were in great demand, especially in Europe where incentives were already in place to encourage power companies to use more renewable resources. Corinth is located less than 60 miles from the port at Searsport, providing relatively easy access to export markets. And at that time, there was also an abundant supply of sawdust from area sawmills, whose traditional paper mill outlets were disappearing in Maine and New Hampshire.

Eldredge went home and started researching the pellet business. He talked to business and wood industry associates, and visited or conferred with pellet operators and machinery suppliers across the country. In November 2006, the former basket weaver purchased the 40-ha site of a recently closed pallet mill. Five months later, Corinth Wood Pellets LLC (CWP) began producing premium grade pellets. Line one started up in April 2007 with three CPM pellet mills; line two came up in July with a CPM and (Andritz) Sprout pellet mill. A third production line encompassing four new 400-hp Bliss pellet mills is slated for installation and startup this year. Current employment is 22 and is expected to increase to 40 with this expansion. The privately funded $5-million enterprise is located in the state’s Pine Tree Economic Development Zone, which provides some tax benefits in the first few years of operation to encourage job creation and growth.

Eldredge is president and co-owns the business with several private investors. The operation is a family affair with daughter Samantha, wife Kathy, her son, Joe Amerault, and brother Paul Faxon assisting in the operation. Faxon, formerly in the construction and development business, serves as operations manager and also assists Eldredge with sales. “Paul is like my third hand,” asserts Eldredge. “If it wasn’t for him, we wouldn’t be where we are right now.”

“I think pellets are one of the energy solutions of the future,” he predicts. First year operations appear to be on target with that assessment. In less than six months, the company built a distribution network of roughly 100 retail outlets and it’s still growing. Initially, managers have focused their full attention on establishing domestic distribution in the Northeast. “We’re taking care of our domestic markets first. As a startup business, we’re trying to get into the business here before we go overseas. The more we can expand our business here, the better it will be for us. As we add the new lines we will target that for overseas.”

Export markets are expected to account for half of planned future production capacity, and arrangements have already been made for handling bulk shipments. CWP has contracted with Sprague Energy to bulk ship and dump product at the port, where there are moisture- and temperature-controlled storage facilities with conveyor systems to fill the ship’s storage holes. Eldredge expects to begin exporting this year. 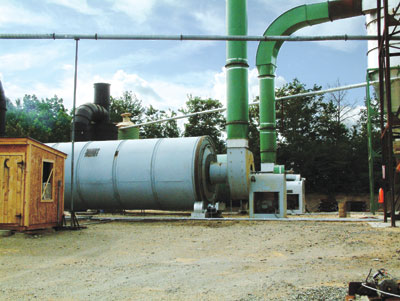 Extraction fans on dryer outfeeds blow material into cyclones that dispense it to augers feeding Jacobs hammermills and two interior storage bins. The key is the length of the hammers and screen size to break up the larger pieces and change the shape of the sawdust particles.

“My feeling is that we need to change the outside molecular structure of the sawdust because I believe that makes a better pellet,” Eldredge states. “That’s why the first test we sent off was a premium grade pellet. It’s burning about 8600 BTUs with less than 1/2% ash and less than 1/2% fines.”

One storage bin feeds three 250-hp CPM pellet mills, and the second feeds another CPM and a 400-hp Sprout. Throughput on the CPMs is about 3 1/2 tons per hour. The Sprout generates 6 tons per hour. Pellet dyes are changed every 3,000 to 4,000 hours of operation. The company started up with five of the smaller CPM units, and has already started replacing those with the larger capacity Sprouts.

Pellet temperatures can reach as high as 300° during the compression process. Pellets discharge from the bottom of the machine and transfer to cooling towers, built in house. Heat is removed via large fans and thick suction pipes. Air passing through the pellets solidifies and hardens the finished product. A quality pellet should have a nice semi-glossy sheen, Eldredge emphasizes. 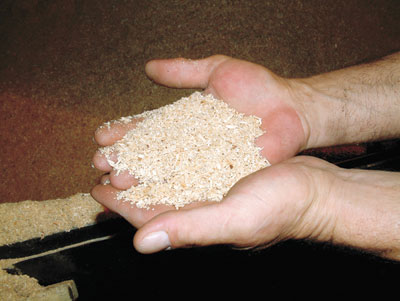 CWP runs only one species at a time, and prefers white pine as the raw material. He believes pine makes a better quality material, although CWP has also experimented with spruce, fir, hemlock and hickory.

BM&M and Precision shakers remove the fines, which are used to fire the burners. Elevator conveyors transfer pellets to a storage silo. Pellets are screened at the shakers again before being conveyed to the packaging lines.

The facility has a manual bagging station and a fully automated Tech Pack Machinery packaging line equipped with a Hamer bagger, capable of processing one bag per second. A Fuji robot arm stacks completed packages onto pallets for final wrapping. 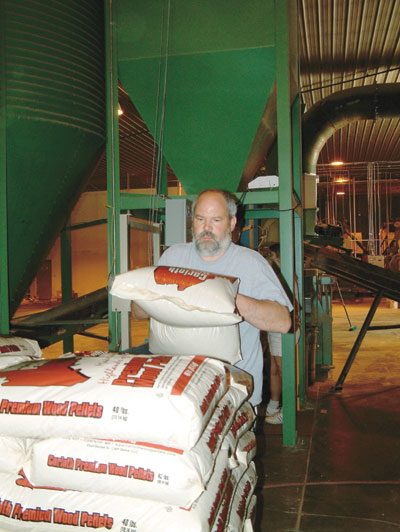 Fibre Risks
Although CWP is poised for growth, available raw material from area sawmills is shrinking due to the market downturn in the lumber industry. Many sawmills have curtailed production, and in some cases ceased operations. Moreover, CWP is just one of several larger pellet projects to grace the state of Maine recently, driving demand up.

“We’ve been buying the sawdust and chips but we’re very picky about what we use for the grades and species,” he says. “And we’re having a hard time getting what we would like to have, so we’re going to process our own.”

CWP has re-permitted the existing log yard and is bringing in some roundwood logs. A Hood loader unloads the trucks, and a demo model CBI horizontal grinder processes material. Immediate plans call for the purchase and installation of two ring debarkers and grinders, which will supply about half of CWP’s future raw material needs. The company was also awarded a $400,000 grant to help build a sawdust storage building. Construction on that project began in October 2007.

Jennifer McCary is an experienced forestry writer for Panel World Magazine, where this report originally appeared. Used here with permission.