May 22, 2013 – Focus on recovery, and the remaining problems solve themselves. That's how EACOM Timber Corp.'s Mel Lemky summarizes the spate of recent projects and investments at the company's Ontario sawmill operations (see a primer on its integrated Ontario operations here).

Lemky, a graduate of the B.C. Interior sawmilling school of hard knocks, is EACOM's vice-president of operations for Ontario. Originally part of the Domtar pulp & paper empire, EACOM purchased its wood products division in 2010, with eight sawmills in Quebec and Ontario. Since that time, the emphasis has been on improving such standard sawmill performance indicators as unit cost and recovery. Lemky says the work his team has been doing at the company's Nairn Centre sawmilling complex reflects that new focus.

"We've been working on some targeted upgrades and focusing on some key areas to take a mill that has been underperforming and make it a respectable sawmill again. Basically we've given the team the tools they need to significantly increase recovery."

The timing couldn't be better, as a steady recovery in the U.S. housing market and expected supply-side constraints in the lumber market have made recovery gains a worthy goal again. At Nairn Centre both the sawmill and planer mill have seen investments worth more than $7 million as part of a larger initiative that also includes non-capital improvement projects.

One of the first steps was to replace a 1980s vintage Esterer board edger with a new USNR optimized edger with Miltrak camera-controlled infeed to maximize both recovery and throughput. Not only did this move solve some obsolescence issues and boost recovery by double digits over the old model, but the enhanced production allows EACOM to target the markets with the highest return rather than being limited by edger throughput.

"The old edger topped out at 4,500 to 5,000 boards per shift (employees work four nine-hour and one eight-hour shifts), so we had to be careful of our product mix to avoid a bottleneck," Lemky says. "The new USNR edger has been tested at 40 pieces per minute with no issues, although we have no need for that speed. We can get 11,000 boards per shift without pushing it at all, which opens up a lot of options for us."

For example, the mill runs some export products for the U.K., a market it would like to keep to maintain some diversity. The challenge was that the product essentially meant making a single target piece and sending the rest of the material to the edger. That run no longer stresses the board edger.

The edger has a three-saw top arbour and reman head to help handle the export products more efficiently, and a combination of mill-flow controllers, speed-up chains and positive chargers to maximize throughput without creating jack-pots.

Another change made last year was upgrading the optimization system on the mill's single breakdown line to brand new Porter technology. EACOM runs an Optimil double-length infeed with four sided canter and twin bands. This is followed by a McGehee (USNR) gang. It has been a reliable producer, notes Lemky, but the scanning and optimization was a little dated.

"With the Porter system we essentially went from 1993 technology to cutting edge. I get a chuckle explaining it sometimes – I'll ask people what was their computer like back in 1993? Think of the changes in computing power and performance in the past 20 years, and then imagine what that means for log scanning and optimization. The improvements have been dramatic."

The mill runs two basic sorts to the single line (large and small), handling a log diet that ranges from a 4-in top to 20-in butt. Lumber from the main line and the edger converge on a Comact optimized trimmer followed by a Gemofor/Carbotech 50-bin sorter. Stacking is on a Gemofor double-fork stacker, which Lemky says does the job but with its fair share of maintenance. The mill also added some extra drying capacity last year, with the addition of an FEI-Wellons138-ft double-track kiln. Overall the mill has two direct-fired natural gas kilns and two wood-fuelled kilns with a Konus hot oil system.

Nairn Centre dries and dresses all its own production, as well as that from the nearby Gogama stud mill, where dual HewSaws produce 100 million bdft. Add that to the 150 million bdft produced at Nairn Centre, and the planer mill has its work cut out.

Currently the mill runs two planer lines: stud and random length. Both have been converted to optimized grading using VAB Solutions systems. The stud line was converted in 2010, and after the project exceeded expectations, the random line was upgraded in 2012. The stud line runs graderless, while at the time of Canadian Wood Products' visit in March, graders on the random line had been dropped from three per shift to a single grade checker.

Lemky admits that with all the big players in the auto-grading sector, going with a smaller group like VAB may seem odd. Still, he notes that the system is doing exactly what they bought it for, adding that the other systems they looked at were considerably more expensive.

"We know what to expect from VAB, we know the principals, and we know they invest in R&D. Regardless of what you buy, that last point is key. Auto-grading technology is evolving so quickly that you're looking at major upgrades every few years."

With more consistent grading and a reduction in graders from six to one per shift, he concludes that once you look at the numbers it's hard not to make the investment. And given the expected difficulty in staffing operations, eliminating hard-to-train occupations is a bonus (see more on EACOM's staffing challenges here).

The new and upgraded equipment is great for morale, Lemky admits, and opens up a lot of potential for the mill (see a list of possible future improvements here). Still, he notes that adding equipment is only half the battle. The rest is training the staff and working with them to capture the technology's full potential.

"Once the technology is installed, it's a case of making the mill run. As soon as you make significant upgrades, it changes everything and you have to get everyone properly trained and upgrade skills where required. And you have to look at the whole flow and see how the new technology can be used to its fullest."

The new board edger is a perfect example. Installed in the summer of 2012, it took some training and attention to key details to get the most from this investment. Following that and a tune-up in January 2013, Lemky says they noticed significant improvements. 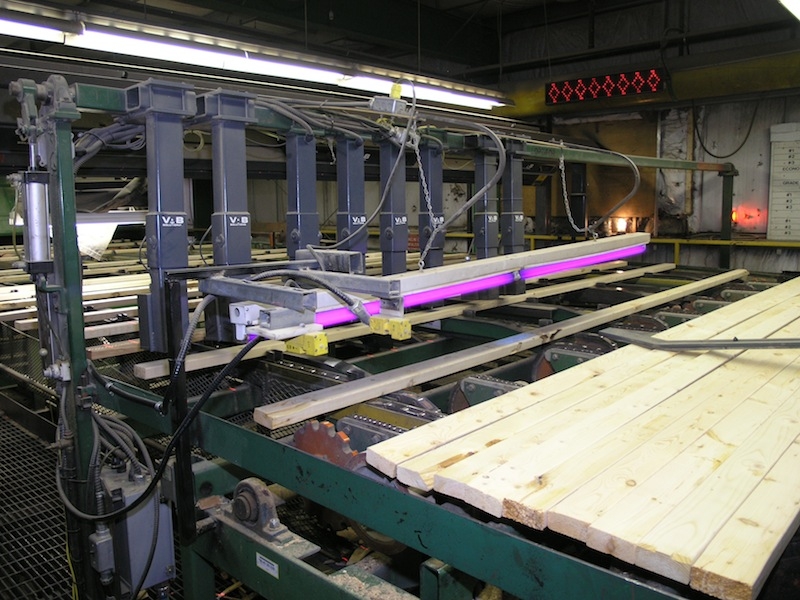 The planer mill upgrade includes VAB automated grading systems on both stud and dimension lines EACOM Timber’s Nairn Centre focuses on recovery gains to capture the most from improving markets.
Print this page