So far, 2019 has not been very kind to the forestry sector. The industry has been dealing with declining lumber prices, low demand, and raging wildfires in Alberta, in addition to the ever-present issues of labour retention and dwindling fibre supply throughout western Canada.

“We’re always looking for new ways to do things, just to stay productive and be efficient, because in the logging industry the rates don’t go up too often, so we just have to try to make it up in efficiencies,” Fortin says.

The company started operating in July 2004 with a chipper, a skidder, a rented loader, and six employees working two 12-hour shifts, five days a week. Now, during their peak season in the winter, Peace River Logging directly employs 60 people, working nine days on and three days off. Including truck drivers and processors, that number almost doubles, Fortin says.

Logging profile
The company harvests and chips hardwood for Mercer Peace River Pulp Ltd. in Peace River, Alta., and provides a consistent diet of tree-length sawlogs for the Boucher Bros. sawmill in Nampa, Alta., as well as some cut-to-length incidentals for West Fraser over in High Prairie, Alta. Their harvesting profile consists of aspen and spruce. The volume harvested per year varies, depending on the mill’s needs, Fortin explains. Last year, the company harvested 500,000 cubic metres for the pulp mill.

Harvesting occurs as far as 180 kilometres outside of town, mainly to the north, on the east side of the Peace River, Erik Lokseth, superintendent at Peace River Logging, tells CFI.

This past year, the season was cut short thanks to an early spring, so the company only harvested around 580,000 cubic metres total.

Out in the bush, they try to keep the skidding distance to 200 metres or less, averaging 160 metres. “There are some fingers, just like any cut blocks, where you have to go 300 or so, but there’s not too much of that,” Fortin adds.

Iron fleet
The company provides chips for Mercer. Recently, they bought a new Peterson 5000H whole tree chipper. When asked why they turned to Peterson, Fortin says, “We tend to have better quality with a Peterson, better chip quality, and probably a little bit better dealer network and support than from other brands.”

When it comes to harvesting, Peace River Logging sticks to a few key manufacturers. “We run all Tigercat 870 bunchers, and we have a combination of Caterpillar 545D skidders and Tigercat 630Cs,” Fortin says. “We’ve found that the Tigercat skidder is probably a better suited machine for the chipping operation – they’re built a little heavier than the Caterpillar for hog removal utilizing a front grapple – but we have a Caterpillar dealer, Finning, right in Peace River, while Tigercat is in Grande Prairie.”

All told, the company has 10 skidders and six feller bunchers. The company also does their own road building with six crawlers from Komatsu and Caterpillar, a Hitachi track hoe, two John Deere road graders and one Caterpillar road grader. On an annual basis, they maintain 160 kilometres of road, Fortin says. They also do block roads, such as installing culverts and bridges and use snow making machines in the winter to install creek crossings.

Despite their increasing workload, Peace River Logging continues to look for efficiencies, including limiting the number of spare pieces of machinery on hand. “We just need to maximize the use of the machines we do have,” Fortin explains. 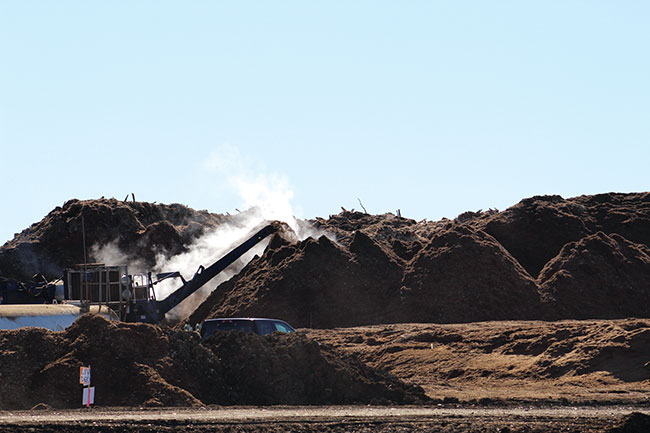 Challenges
The challenges of a short season and a more difficult-to-access fibre supply are exacerbated by other difficulties as well, mainly the problem of labour retention, especially as the oil and gas industry gains momentum again in Alberta.

“The key in logging is trying to get your staff back the next year, the next season, which is a challenge. We’re always competing against the oilfields,” Fortin says.

But even when the company gets employees from the oil and gas sector, it’s not as easy to train or retain them as it was in the past, Lokseth says. Many of these new employees do not have experience working in high-production scenarios, which logging contractors must do to stay afloat in such a challenging industry. “We’re production-based, so we generate money from getting things done in a more efficient manner.”

Attracting younger workers is another challenge for the logging company, particularly in recent years. “In the past, there used to be a lot of farming that worked hand-in-hand with logging,” Lokseth elaborates. “Farming was happening in the summer time and then logging started up when farming stopped, so it worked really well. But now, with our operations transitioning to year-round with the implementation of our new satellite yard, it’s more difficult to attract these workers who have equipment operating experience.”

“A lot of the younger employees we’re getting, we’re finding that logging is not really for them. They’ll decide that after one shift, two shifts, a month, or sometimes just in the middle of the night they just decide to hop a truck and come to town. That’s what we’re facing. It’s a high turnover industry, obviously, especially with logging being seasonable,” Elkins says.

As a result, the company is starting to struggle to keep employees in their camps and get staff to work the night shift. Combined with a shorter harvest season, this means expensive machines are putting on fewer hours.

“You want to get maximum utilization out of your equipment,” Fortin says. “You don’t want a $600,000 feller buncher sitting there 12 hours a day – you can’t afford to run it only 12 hours.”

And equipment has only become more expensive over the years. Peace River Logging’s new Peterson 5000H chipper cost $1.9 million, Fortin says, but five years ago two new chippers could be bought for that same price.

On top of that, rates haven’t changed to keep up with all of these expenses.

Running on efficiencies
With all of those issues weighing down on logging contractors across the country, the outlook might seem bleak. But Peace River Logging is looking at several ways to optimize their operations. Fortin is looking at replacing equipment on a two-year cycle to reduce maintenance costs and boost efficiency.

“Logging equipment works hard. We’ve been keeping our equipment for four or five years, but want to establish a two-year rotation to maximize the re-sale value and maintain reliable equipment,” Fortin says.

In an effort to address the issue of employee retention, the company recently began chipping in their satellite yard. Now, they haul the wood and can chip year-round, which allows them to employ people throughout the year. This helps them retain their more experienced employees for their chipping operations.

“So far, it’s worked quite well,” Fortin says. “There’s been some growing pains and learning pains, but it’s allowed us to keep some of our key people.” Altogether, Peace River Logging employs 25 full-time year-round employees. They work in a three-shift rotation, five days on, followed by five nights, and then five days off.

Technology also helps the company maximize its efficiency. They are considering implementing an improved tracking system to make sure equipment is maximized. “The trend now is changing more towards monitoring operators through GPS and managing production that way, to try to keep people honest in terms of what they’re actually doing and not what they said they did,” Lokseth adds.

The company is also taking advantage of other technology, such as drones, which can be used to find the best access to cut blocks, reducing costs and environmental footprint, Elkins says.

“You used to spend countless hours a week on a quad trying to get into these areas, and really now you don’t even need to. And the drone gives you 4K type, high-quality video back,” he explains.

Looking to the near future, Fortin admits, “It’s going to be quite challenging.”

But this isn’t daunting for him. By making their operations as efficient as possible, Fortin is confident Peace River Logging will be able to weather the ups and downs of the industry, as they have done for the past 15 years.