Despite a 20% increase in the number of inspections of companies working in BC’s forest sector by WorkSafe BC and a major decline in accepted claims, fatalities in the province’s forestry sector increased dramatically from nine in 2007 to 21 in 2008 according to the latest statistics from WorkSafe BC. 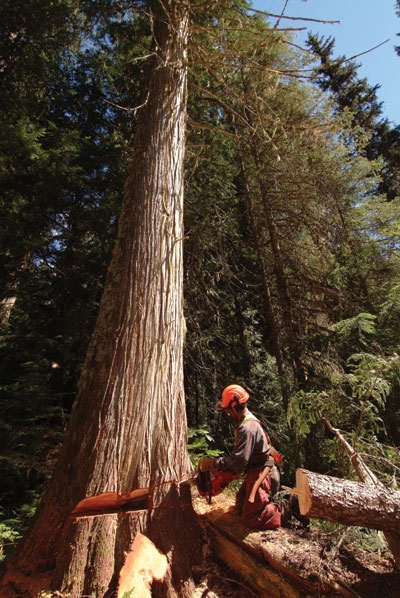 “This is a terrible tragedy,” says Tom Bailey, industry labour services manager for forestry and electric utilities at WorkSafe BC. “Not only are accepted claims going down and fatalities up, but we are seeing another alarming trend in that it is very experienced people getting killed on the job. We saw eight fallers die last year and this was the largest component of the forest industry fatalities. These were certified fallers with six to 34 years on the job so it wasn’t from lack of experience.”

Bailey says WorkSafe BC doesn’t have the answer at this time as to why the fatality rate jumped in 2008, but he is confident they will solve the problem. “We have struck a committee involving our investigation folks, our senior field officers, and our legal people, and we are doing a detailed analysis of the fatalities in falling as this is our greatest area of concern,” he explains. “I have said to the people working on this committee, ‘we need to do it right’ so we will use all of the WorkSafe BC resources and time required. We are going to go back to 2000 and will do a thorough analysis of each of the fatalities. We hope to have a report available for external distribution by June, but we won’t put a time constraint on it.”

At the BC Forest Safety Council (BCFSC), chairperson Bev Briscoe expressed similar concerns. “Fatalities increasing is not acceptable,” she says. “Even our lower rate of incidents is unacceptably high. If anything, both of these are an indication that making permanent changes to improve safety is a long-term process for everyone in the industry.”

The BCFSC numbers differ slightly from WorkSafe BC as they include forest management services in their statistics. However, the trend was the same. The number of forestry related fatalities recorded on their books during 2008 was consistent with WorkSafe BC at 21, but for 2007, BCFSC recorded 13 fatalities compared to WorkSafe BC’s nine.

Economy no factor
BCFSC was created in 2004 as a not-for-profit society dedicated to promoting forest safety in the sector. It is supported by WorkSafe BC and the provincial government, and its mandate is to work with the forest industry to eliminate fatalities and serious injuries and create an environment of working safely and encouraging improved health and safety programs, performance, and results. BCFSC has played a key role in working towards a safer environment in the woods and works closely with WorkSafe BC on the BC Faller Training Standard & Certification Program.

“Fatalities are the worst case scenario in safety outcomes, and we’re not happy that they rose in 2008,” adds Briscoe. “The Council and industry are concerned about all fatalities and injuries occurring in the industry, no matter what sector or position is involved, but the safety of fallers and truck drivers is one of the Council’s primary focuses, as these two groups currently seem to be at the highest risk.”

When asked if the current economic situation may be contributing to the higher fatality rate, both Briscoe and Bailey said there was no indication that economics have played a part in the increase.
“The Council believes the industry has worked hard to establish a solid safety foundation and that successful businesses embrace it,” explains Briscoe. “Successful businesses pay attention to safety from the board room to the forest floor, no matter what the economic climate. The fact is, safety is simply good business. It’s as important as watching your cash flow.”

Over at WorkSafe BC, Bailey says the economic situation is one they will be looking at. “This is just one question out of many that we will be addressing, but there is certainly no indication that this is the case,” he notes.
As for correcting the situation, Bailey says they have to first find the problem. “We need to understand what the problems are, where they are, and what the magnitude of the problem is,” he explains. “We will address various strategies. Some may be internal such as how we conduct our inspections, and some may be external, like sitting down with the Forest Safety Council, the unions, and the safety reps at companies. We also have to be very cognizant of the fact that we have an industry that is almost crippled financially, and we need to make sure that we get the most bang for our buck for them. I’ve been around this industry since 1966 and I have never seen anything like this economic situation. It’s an unprecedented horror show, so we need to make sure that when we ask companies to put some of their resources into finding a solution to the safety issue, that we develop a response that will meet the targeted need.”

For their part, BCFSC staff will continue to work with companies to eliminate all serious injuries and fatalities. “Trained workers, good safety programs, a good legal safety requirement and a workplace culture that supports safety as an overriding priority – these are the things that we’re working towards,” says Briscoe.

Both organizations are pleased that the overall number of claims and incidents has been reduced, although this may be partially due to reduced harvesting volumes in the province. BCFSC numbers indicate a 33% decrease in registered claims or incidents, dropping to 2,760 in 2008 from 3,665 in 2007. The BCFSC numbers also show a 2.6% decline in registered claims in comparison to harvest rates as supplied by the BC Ministry of Forests and Range, dropping to 5.04 in 2008 from 5.17 in 2007. The WorkSafe BC numbers show a drop in “claims accepted” to 1,079 in 2008 from 2,496 in 2007.

“We are happy that the claims rate went down in 2008, but we are really concerned with the fatality rate and we all need to work in partnership to try to stop this trend,” concludes Bailey.