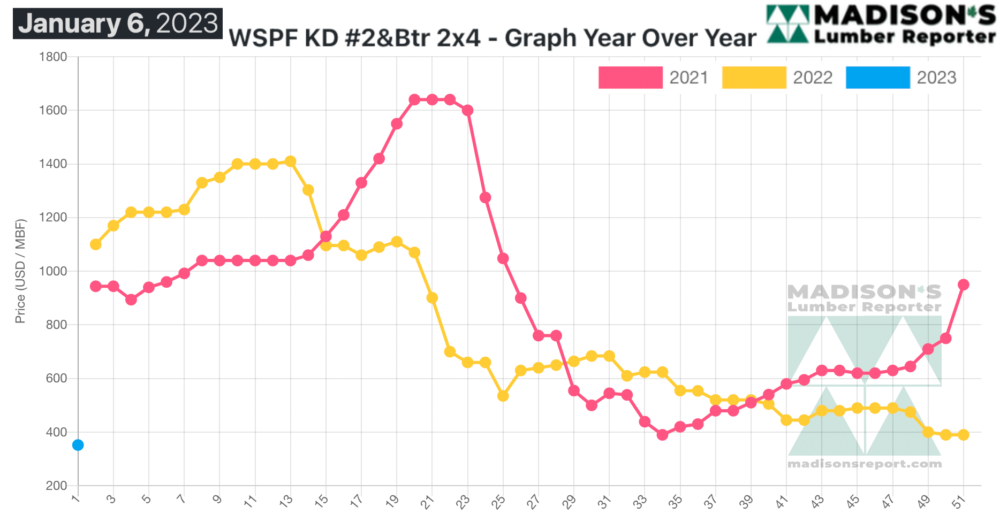 As a fresh, brand new year of 2023 got started, lumber sales continued with the slow momentum which ended last year. This is normal for the season, particularly given some very harsh winter weather across the continent. Winter is not usually a good time for home building and construction. Several large-volume operators, especially in British Columbia, had reduced production and curtailed lumber manufacturing for a couple of months, and are continuing to do so in early January. This slow-down is bringing supply more in line with demand, and potentially preventing lumber prices for falling further in a normally weak seasonal market.

Order files ranged between the weeks of January 9th and 23rd, with wide widths and high-grade items out the furthest.

“The lumber market started off the New Year on a weak note in every commodity group.” — Madison’s Lumber Reporter 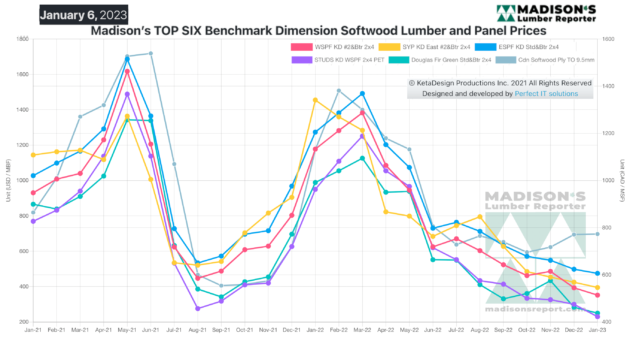 Sales volumes of Western S-P-F lumber and studs started off the New Year on a weak note, according to suppliers in the U.S. Asking prices were flat or down from late December levels, and buyers were few and far between. Sawmills didn’t have much accumulated material as they had been largely shut down or running at reduced capacity over the past two weeks. Supply remained slightly behind demand however, as the latter was practically nonexistent over that same span. Stud producers reported sloppy sales no matter the trim.

Western S-P-F purveyors in Canada noted a sputtering start to 2023. Buyers remained cagey and hyper-aware of continually weakening prices, barely even bothering to short-cover their inventory. Downstream construction activity was dampened in most key regions by deepening winter weather, further justifying buyers’ sitting on their hands. Producers had little to no success finding trading levels, especially on 2×4 R/L items of all grades. The moribund start to the New Year was perhaps best encapsulated by an announcement from Canfor that it will extend curtailments at select BC sawmills.

“Green Douglas-fir commodities were on the ropes again according to traders in the Western United States. Producers cut their asking prices on every item and buyers were unmoved. Most players already had their early- to mid-January needs covered, electing to wait for more potential corrections as they felt no pressure from currently-quiet downstream target markets. Suppliers were miffed with freight rates that continued to slowly rise, as their wet wood got heavier and more costly to transport with each passing soggy winter week. That concern would be more acute if greater volumes were being moved.” — Madison’s Lumber Reporter